Logan Gravink scored the winner at 8:59, and the Huskies winning in OT became a trend. 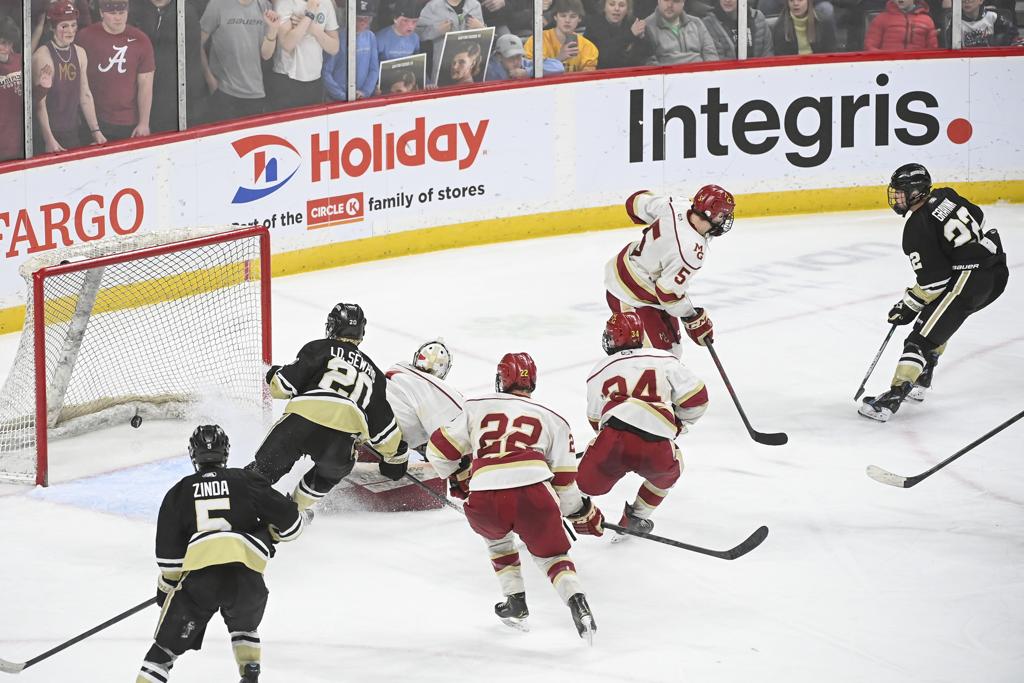 “Lou Nanne came and talked to the boys and said this was the best hockey game he’s seen since 1969,” Andover coach Mark Manney said of the state tournament analyst since 1964. “It was fun on the bench and probably a great game to play in. Fortunately, we got the bounce and Logan finished it for us.”

A year ago, Maple Grove fell in overtime of the state tournament semifinals by a 6-5 score.

“Just to keep getting one step further every single year and still not getting it, it’s really hard,” senior Josh Giuliani said.

Giuliani’s hat trick knotted the game at 4-4 in the third period. Giuliani also lit the lamp three times in the semifinals against Prior Lake.

Andover’s Gavyn Thoreson made the bonus hockey possible. He redirected a puck with 1:50 remaining in regulation, producing a 5-5 tie and continuing his remarkable state tournament run for No. 5 seed Andover (25-5-1). He scored in overtime to beat Moorhead and tallied two goals against Hill-Murray.

The third period mirrored the first. Goals went both ways and leads changed hands. The second period ranked as equally compelling thanks to swift skating from both teams.

Andover rallied to later tie the game 3-3 as rushing defenseman Weston Knox received a pass from Thoreson in the slot and buried the puck.

Andover won the first game of their conference series 5-3 on Dec. 16. Maple Grove returned the favor with a 4-1 victory Feb. 12.

“A lot of people got to see one hell of a hockey game,” Maple Grove coach Todd Bergland said. “It’s a good way to bring it back out of COVID and give the fans something amazing. It’s unfortunate someone has to lose a game like that.”

2. Gavyn Thoreson, Andover: A junior, he tied the score 5-5 with 1:50 left in regulation, sending the game to overtime. He added two assists.

3. Joshua Giuliani, Maple Grove: The senior forward scored his second hat trick in as many nights, giving him eight goals for the tournament.

BY THE NUMBERS
6-5
The score by which Maple Grove lost to Eden Prairie in overtime of last year’s state semifinals. Also the final score Saturday.
68%
The amount of its goal scoring Maple Grove lost when 11 seniors graduated last season.
1
Boys’ hockey state championships won by Andover.