North Stars pick up first win of the season

Prairie Centre wins one of two in second week of season 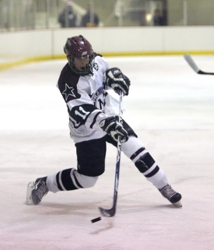 Senior Brady Schulzetenberg takes a shot at the goal in the game against Detroit Lakes. Photo by Taylor Lunemann

After finishing the first week of play winless, the Prairie Centre North Stars hockey team entered the second week of games hungry for a win.

Five minutes into the game, the North Stars were able to get a goal from Sean Colton to take a 1-0 lead. Dan Perry and Nate Mettenburg were credited with assists.

The lead was short lived as Detroit Lakes would answer back six minutes later with a goal of their own by Austin Rusness on assists from Derick Brehm and Alex Mason.

All the rest of the scoring was done in the second period as Detroit Lakes locked down on the North Stars.

8:35 into the second period, Connor Collins scored on the power play with the assist coming from Alex Mason.

Clay Deters played the entire game in the goal for the North Stars. He finished with 28 saves on 31 shots.

The next night, the North Stars got another chance at their first win of the season when Litchfield/Dassel-Cokato came to Sauk Centre.

Despite falling behind 2-0 early in the first period, the North Stars rallied to win 4-3 for their first win of the season.

LDC took an early lead when they found the goal 5:41 into the first period on a Cole O’ Brien goal off the assist from John Raisanen.

Though falling behind 2-0 early, the North Stars did not give up.

They cut the lead down to one when Derek Holm scored on the power play 8:14 into the first period. Cody Bartkowicz was credited with the assist.

The North Stars struck again late in the first period with Ryan Connor capitalizing on the power play. Bartkowicz got the assist.

Midway through the second period, the North Stars were able to take the lead when Ryan Connor scored his second goal of the night on the assist from Tyler Schultz and Sam Ecker.

The third period brought more scoring for the North Stars. Five minutes in, Bartkowicz scored, this time Holm was the one with the assist.

With just minutes remaining in the game, LDC would be able to cut the lead to one with a Nikula goal on the power play. Raisanen had his second assist of the night.

The North Stars were able to hold on to win their first game of the season.

Justin Brever played the whole game in the goal and finished 26 for 29 on saves.

The North Stars next play at Bagley on December 17.