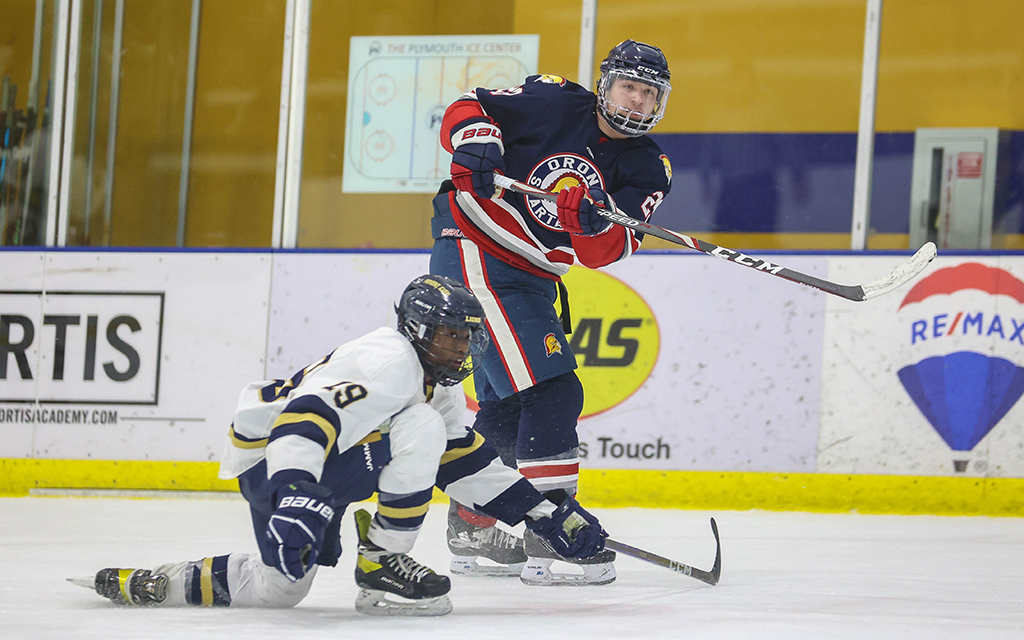 Connor Lang takes a shot for Orono. Lang recorded one goal in the Spartans' 6-3 win over Providence Academy. Photo by Brennan Schachtner, SportsEngine

Orono was up by a pair of goals with under a minute left in regulation, and junior defenseman Joey Mugaas got the puck along the boards at center ice. Turned slightly away from the opposing net, he lofted the puck on the backhand toward Providence Academy’s empty net. The puck made its way into the net for his second goal of the game.

It was that kind of charmed night for Mugaas, who finished with his first goal of the season and four points.

“We called him Joey Makar today because he looked so good,” said Orono coach Sean Fish, referencing Colorado Avalanche defenseman Cale Makar. “He was up and down the ice. He was controlling the game. He made the right play 99% of the time. He’s that type of player where he can take over games on the back end. It’s just a matter of being consistent every night.”

Mugaas scored the third of Orono’s five second-period goals, assisted on two others and sealed the victory late as Orono skated to a 6-3 win over Class 1A, Section 2 rival Providence Academy on Tuesday at Plymouth Ice Center. 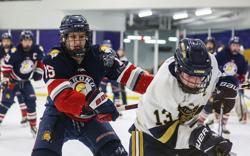 The four-point effort earned Mugaas the Spartan Player of the Game helmet in the locker room, a postgame tradition started this season with Fish leading the Orono boys’ team for the first time. Mugaas received the helmet once before, but he credited the team effort for Tuesday’s win.

“If I didn’t have every single guy on that team, we wouldn’t have won that,” Mugaas said. “I don’t really want to talk about myself. I just want to focus on the team.”

Both Fish and Orono senior captain Bradley Walker spoke highly of Mugaas’ game on Tuesday, with Walker calling him an anchor this season.

“I think he’ll never say it, he’s too humble, but I think he had a great game,” Walker said. “He’s been playing great the whole year. He’s been huge for us. And he’s only going to keep getting better.”

Walker was awarded one of the other postgame trophies of sorts by the coaching staff. He was given a yellow, smiley-face sponge, which goes to the player who blocks the most shots in a game. Junior Brooks Fegers, who Fish said “played the game the right way” and allowed him to get a lot of shots on net, finally cashed in for the fifth Orono goal of the game, received a hammer, symbolizing the hardest working player in the game.

Orono, ranked No. 3 in the latest Class 1A coaches' poll, was down 1-0 at the first intermission, despite outshooting No. 17-1A Providence Academy 10-1 at one point during the period. The Spartans needed a quick answer in the second period, and they got it in the form of a deflection goal only 38 seconds into the period. Junior Cayden Effertz deflected a shot from John Engebretson to tie the game.

Orono took its first lead a few minutes later on a pretty tic-tac-toe play. Once the puck got free off the boards, Orono’s Avery Anderson fed Mugaas, who passed it to Easton Sankey. Anderson finished off the play in the slot for his ninth goal of the season.

The Lions made it a one-goal deficit again on a Louie Wehmann top-shelf shot for a 3-2 game. But Orono answered right back in a span of 22 seconds on a Connor Lang goal.

“It seemed like every time we scored though, they answered, or vice versa,” Fish said. “So it was one of those things where it was a back-and-forth game for a little bit there. We’re not a team that loves to get in track meets. We’d rather be responsible at both ends of the ice, play a 200-foot game.”

With under three minutes left in the second period, the scoring wasn’t done. Fegers made it 5-2. But Wehmann showed why he’s in the top-10 of goal scorers in the state when he fired a quick shot off the rush with 1:12 left in the period for his 25th of the season.

Orono led 5-3 at the end of two periods and didn’t let the Lions roar back. The Spartans got scoring from all three lines (Fish refers to them as 1A, 1B, 1C lines), plus defensemen. It’s depth that captain Walker, listed as the top-line center, said Orono (12-2-0) hasn’t had in his career.

“I think it’s only going to help us in the long run,” Walker said. “It’s great to see everyone pitching in, pulling their weight, playing their role. I love to see it.”

Orono has won both meetings between the two teams this season as the Spartans also defeated the Lions 3-1 in the Warroad holiday tournament at the end of December. The Spartans have won four of their past five games, including the two victories over the Lions (7-8-0).

The Lions, meanwhile, have lost four of their past five games to fall below .500 and are on a season-long three-game losing skid. Lions coach Chris Lewis said his team struggled to find their identity Tuesday night.

“We really wanted to emphasize coming out strong (Tuesday), and we did,” Lewis said. “And they got us in the second period a little bit. I think what we’re going to be thinking about with the guys is little things win big games, from here on out.” 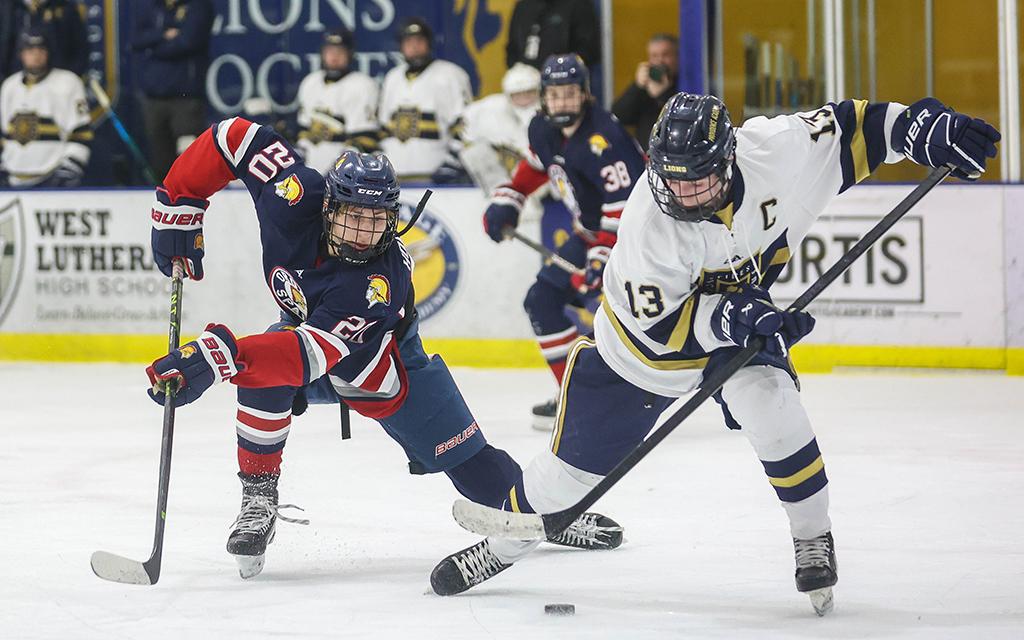 Orono found itself down 1-0 through one period of play against host Providence Academy before the Spartans rallied for five second-period goals on the way to a 6-3 victory Tuesday at Plymouth Ice Center.

Trailing by a goal, the Spartans, ranked No. 3 in Class 1A in the latest Let's Play Hockey poll, tied the game 38 seconds into the second period on junior Cayden Effertz’s ninth goal of the season. From there, Orono held three separate two-goal leads in the period. Five different players scored in the second period on 10 shots on goal.

In goal, Spartans senior Brock Peyton made 19 saves, while senior Nate Miest stopped 27 shots for the No. 17-1A Lions.

Orono (12-2) has won both meetings between the Class 1A, Section 2 rivals this season, as they first defeated the Lions 3-1 in the Warroad holiday tournament at the end of December. The Spartans have won four of their past five games, including the two victories over the Lions.

The Lions (7-8), meanwhile, have lost four of their past five games to fall below .500 and are on a season-long three-game losing skid. 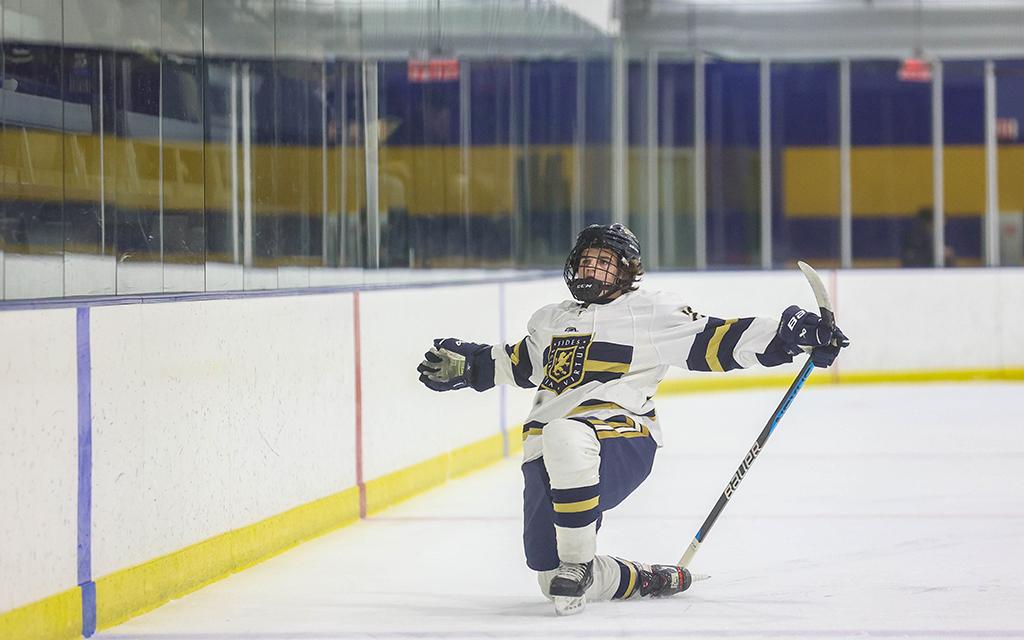