No. 5-ranked Edina advances behind superb 27-save effort from Willie Benjamin 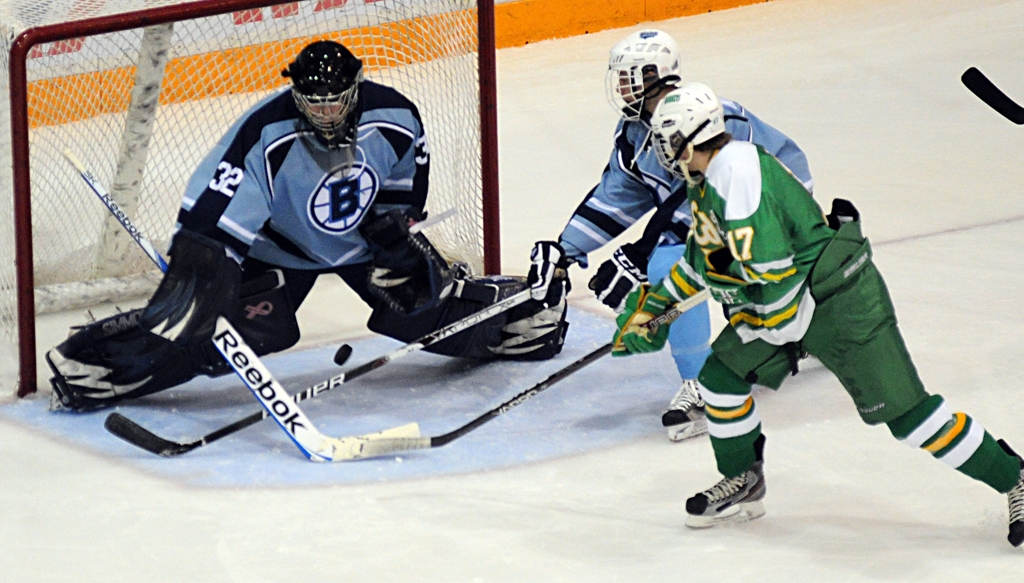 Edina's Tim Spicola (17) knocks the game-winner past Blaine's Nick Malvin in a 2-0 victory for the Hornets (Photos by Tim Kolehmainen). 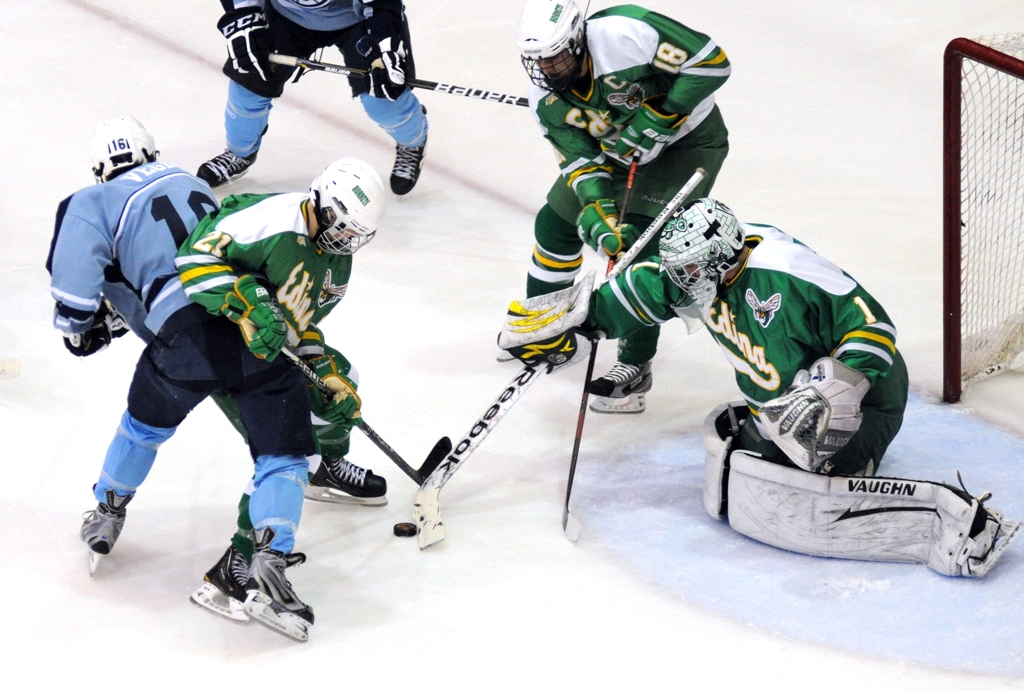 Edina goaltender Willie Benjamin made 27 saves for a shutout victory.

Willie Benjamin has a certain presence in the crease. The junior goaltender stands well over 6-feet with skates on, giving him one of the most important attributes to a goalie – size.

On Monday in Edina’s Schwan Cup Gold Division quarterfinal win against Blaine, Benjamin gave a first-hand clinic in how size can benefit the guy between the pipes.

Bemjamin turned aside all 27 shots he faced, earning his first shutout while backstopping the Hornets to the semifinals of the Gold Division. Many of his saves were because of his long legs, which he kicks out like pinball flippers to turn opponent shots aside.

“I obviously like the butterfly,” said Benjamin, who has a 1.49 goals against average and .933 saves percentage in nine games to date. “I like playing down and out because I’m big enough. I like to play like [Vancouver Canucks’ goalie Roberto] Luongo used to play.”

Some of his best stops came with traffic in front, allowing him the minimal amount of time to see a shot before it got to his net. But, because of his ability to drop into the butterfly and take away the entire bottom of the net, he was able to contain the tricky chances through skinny shooting lanes.

“He played well. He made key saves at key times that you hope your goalie makes, so he played well,” Edina coach Curt Giles said.

Benjamin’s shutout bid was jeopardized as time ran out when a Bengal forward skated in on a late breakaway. Even so, the calm, cool netmider pushed to his right, didn’t bite on the deke and shut the door.

“I definitely wanted it,” said Bemjamin, referring to the Blaine attempt at the end. “We would have won anyways, but it was nice to have the shutout there. It makes it more fun too with the breakaway.”

While he isn’t sure if he’ll get the nod tomorrow against conference rival Minnetonka, Bemjamin expects to come to the rink ready to play.

“I’ll try to visualize what I want to do before the game,” Benjamin said. “[I’ll] be ready when I get out there.”

Tim Spicola golfed in a rebound on a goal-mouth scramble midway through the first period and both goaltenders made it stand up as the game-winner in Edina's 2-0 victory over No. 10AA Blaine in the Schwan Cup Gold Division quarterfinals at Ridder Arena in Minneapolis on Monday, Dec. 26.

Cullen Munson started the winning play for the No. 5AA Hornets (8-1-0), centering the puck from behind Bengals' goaltender Nick Malvin. Anthony Walsh chipped it on net and Spicola knocked the rebound through the five-hole to give Edina a 1-0 lead at 8 minutes, 12 seconds of the first.

That was the only goal until late in the third when Louie Nanne scored a disputed goal, batting the puck out of mid air past Malvin. After a brief discussion, the referees let the goal stand for a 2-0 lead.

Edina will play No. 2AA Minnetonka in the Schwan Cup Gold semifinals at 8 p.m. Tuesday night at the Xcel Energy Center in St. Paul.

Blaine faces Hill-Murray in the consolation semifinals at 2:30 p.m. Tuesday at the X.

1. Willie Benjamin, Edina
The junior goaltender faced several flurries but stood tall with a 27-save shutout. He capped a great night with a pair of point-blank saves on the Bengals' Jesse Norling. Benjamin has won six straight decisions, getting all the work in goal while teammate Connor Beaupre has recovered from an injury.

2. Tim Spicola, Edina
On a night in which goals were tough to come by, Spicola gave the Hornets the only one they'd need. His rebound of an Anthony Walsh shot slipped through the five-hole of Blaine goaltender Nick Malvin 8 minutes, 12 seconds into the first period.

3. Nick Malvin, Blaine
Though he ended up with the loss, Malvin was peppered with 36 shots off Edina sticks. Both goals were scored on scrums in front, as Tim Spicola's game-winner came on a scramble and Louie Nanne's third-period goal on a disputed midair deflection of a shot. Malvin finished with 34 saves. 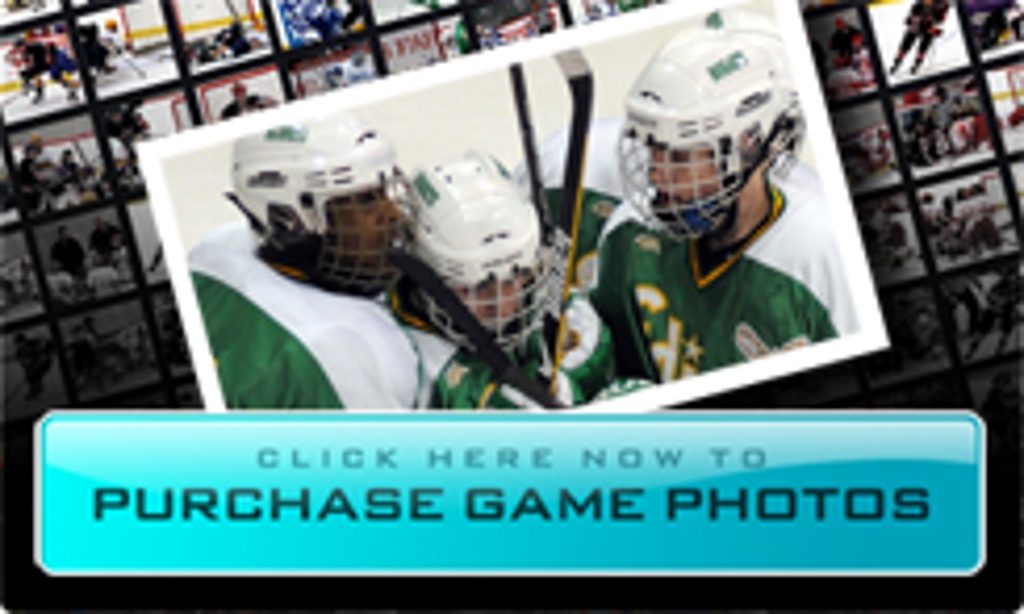