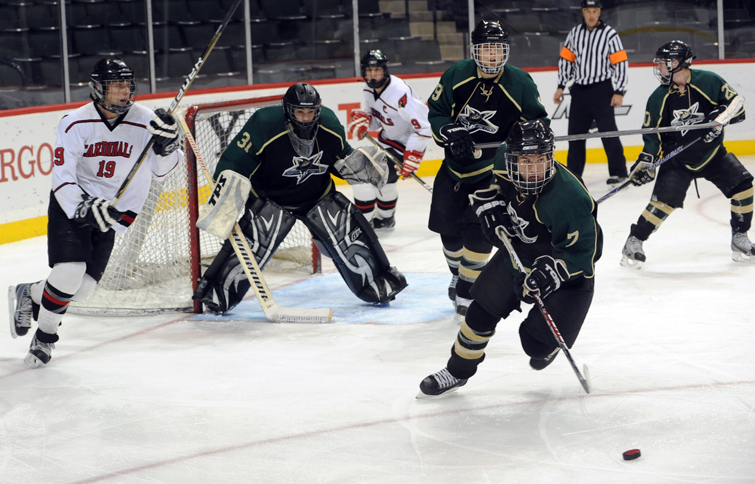 North Metro head coach Mike Carhill knows he has a team full of battlers. So when the Stars surrendered two early first-period goals against Coon Rapids in the Schwan Cup Open Division finals on Wednesday, Carhill knew exactly how his squad would respond.

“No pity, that’s our motto. It’s an attitude thing with our guys,” Carhill said. “We were down 2-0 against them last time we played, too. We try to tell them to be mentally strong.”

The Stars didn’t fret, kept their focus and willed their way to a 3-2 come-from-behind win.

It marked the second time in eight days that North Metro has beat the Cardinals after falling behind 2-0. It was also a rematch of last year’s Open Division title game, which Coon Rapids ended up winning.

The Stars weren’t about to let that happen again.

“We came up short and were pretty bummed that we lost last year,” said Jordan Stroh, who finished with two goals and an assist. “We love playing [at the Xcel Energy Center], and we took it to them this year.”

Stroh, along with teammate Travis Ricci, we the best players on the ice for North Metro. The two combined for six points, factoring in on all three Stars goals.

The reason for their success against on Wednesday Coon Rapids? A consistent, unrelenting effort, exactly what their coach expects from them.

After the Cardinals opened up their two-goal lead, Stroh scored a late first-period tally to get the run stopped. Then, after numerous power-play chances that just wouldn’t click, Ricci found himself with a lane and rocketed a slapper past netminder Patrick Drazkowski to tie the score before the end of the second.

Stroh scored just 2 minutes, 37 seconds into the final period, the Stars locked up their own end and skated away champions.

“In the beginning of the season, we would have put our heads down [after falling behind],” Ricci said. “Today we picked our heads up, never gave up and battled back to get the win.”

Added Carhill: “The kids worked hard. They wanted to win this, and it was one of their goals at the beginning of the year. We thought it would be a tough game and it was.”

Jordan Stroh scored twice and had an assist, Travis Ricci had a goal and two assists and T.J. Dunleavy made 27 saves – including one on a penalty shot to end the second period – as North Metro beat Coon Rapids 3-2 to win the Schwan Cup Open Division championship on Wednesday, Dec. 28, at the Xcel Energy Center in St. Paul.

The game was a rematch of last year’s Open Division title game, which Coon Rapids won 6-3.

Stroh scored what proved to be the game-winning goal 2 minutes, 37 seconds into the third period.

The Cardinals (4-6-0) were in command early against their Northwest Suburban Confernce rival, as Dillon Ridge opened the scoring 9:45 into the first period. Teammate Seth Johnson scored less than 2 minutes later to make it 2-0.

Stroh scored the first of his two goals late in the first period to cut Coon Rapids’ lead to 2-1.

Ricci scored the only goal of the second period on a power play. Coon Rapids’ star defenseman Alex Wojciechowski was called for a 5-minute head contact major in the period and Connor Kirkeide was called for holding a couple minutes later to give North Metro a 5-on-3 advantage.

The second period ended in dramatic fashion as a North Metro player was ruled to have covered the puck with his glove while in the crease. Coon Rapids was awarded a penalty shot, and Wojciechowski’s shot was turned aside by Dunleavy.

1. Jordan Stroh, North Metro
The big, crafty forward was involved in all three Stars’ goals, scoring two of them. And assisting on the other. His goal early in the third period proved to be the winner.

2. Travis Ricci, North Metro
Ricci’s power-play goal in the second period gave North Metro a big lift. He helped set up the Stars’ other two goals while playing the role of sidekick to Stroh.

3. T.J. Dunleavy, North Metro
The Stars’ goaltender made 27 saves, and none were bigger than the one he made blocking-glove side on Alex Wojciechowski on a penalty shot at the end of the second period. Dunleavy also made several clutch stops during multiple scrums in front of the goal in the closing minutes of regulation. 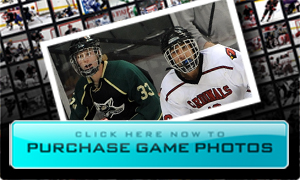