Rogers goalie Robby Vukelich got a taste of what playing at the Xcel Energy Center is like on Wednesday afternoon in the Schwan Cup Bronze Division title game. Even though he marched off the rink with a gold medal around his neck, Vukelich isn’t content with his 51-minute skate on the grandest stage in Minnesota hockey.

“[Winning the Schwan Cup] feels good, but going to the X for the State tournament would feel really good,” said the steady Vukelich after his 35-save effort against Mounds View in the Bronze Division finals. “That’s what we’re hoping for.”

With Vukelich between the pipes and a deep group of blue-liners than allows head coach Tim Marchand to roll all defensemen without a drop off, Rogers has the tools to make that dream become reality.

“We work a lot on defensive zone coverage,” Marchand said. “Sometimes you look at the box score and see 30 or 35 shots [against], but we do pride ourselves on keeping them to the outside and keeping them from the prime scoring areas.”

“When they do get in those areas, [Vukelich] is very consistent.”

The Royals executed their defensive game plan to near perfection on Wednesday, limiting Mounds View to the seldom quality look as the Mustangs settled for 40-foot shots.

Rogers also played a physical, gritty game, wearing out Mounds View to the point that they weren’t able to muster anything at all late in the game.

“We know that if we stay the course good things are going to happen,” Marchand said. “[Once we got the lead], you felt the momentum going our way. Once these kids get that feeling, they just go.”

There is one gigantic hurdle standing between Rogers and a March trip to St. Paul, though – defending Section 5A champs Hermantown. Still, Marchant believes his team has what it takes to play at the Xcel Energy Center again.

“We played Hermantown earlier in the year, and [lost] a 2-1 game. We were leading after two periods, and we kept them down to 13 shots after two,” Marchand said. “Our goal is the X. When we came in here we knew that today was our prelude to coming back here in a month and a half or so.”

As Neal Smith took his spot for yet another offensive zone faceoff, he and his Rogers teammates knew something that Mounds View didn’t – the Royals had a proven trick up their sleeves.

Smith picked up the puck after a clean win from the center, took a couple steps towards the middle and launched a wrist shot under the crossbar to give Rogers their first lead of the night.

“We actually score on that play a lot,” Smith said. “We win it back, and we drive to the net. [The other team] kind of collapses. This time the puck was right there, so I just shot it in.”

The goal came just 33 seconds after Rogers had tied the game, completely took the energy out of Mounds View and ended up being the game-winner, giving Rogers the Schwan Cup Bronze Division championship.

For the Royals, it was almost an expected break.

“We told them to keep play, stay the course and play their game,” head coach Tim Marchand said. “5-on-5 I thought we had the better hand. We scored that first one and you could just see the jump on the bench.”

Bryan Jungles and Neal Smith scored 33 second apart in the third period as Rogers surged past Mounds View 3-2 to win the championship of the Schwan Cup Bronze Division on  Wednesday, Dec. 28, at the Xcel Energy Center in St. Paul.

Mounds View, which lost to Champlin Park in the Bronze Division championship game last year, was leading 2-1 when Jungles tied it on a wrist shot from the high slot. Smith scored on a quick shot off a face off in the Mustangs’ zone to put the Royals (6-4-0) in front with 9 minutes, 43 seconds remaining.

A.J. Rupert and Jacob Tretsven scored in the second period to give Mounds View (4-5-0) a 2-0 lead. Nate Weber answered for Rogers with 6:21 left in the period.

Rogers’ Robby Vukelich and Mounds View’s Brandon Smith were outstanding in goal, especially in the scoreless first period when Vukelich made 13 saves and Smith 12. Vukelich finished with 35 saves while Smith had 33.

1. Neal Smith, Rogers
Smith scored the game winner in the third period, whipping a shot high over Mounds View goaltender Brandon Smith’s glove on a bang-bang play off a face off to the left of the Mustangs’ goal. Smith’s line, which includes Andrew Smith and Nate Weber, gave the Mounds View defense fits all game.

2. Robby Vukelich, Rogers
The Royals’ acrobatic senior goaltender was tested early (he made 13 saves in a scoreless first period) and often (he faced a barrage of shots late in the third) and did a great job of controlling his rebounds en route to a 35-save performance.

3. Brandon Smith, Mounds View
Playing a stand-up style that relied heavily on his ability to cut angles, Smith, a sophomore, made 33 saves and made almost all of them look easy. 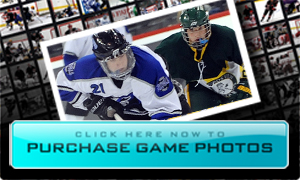