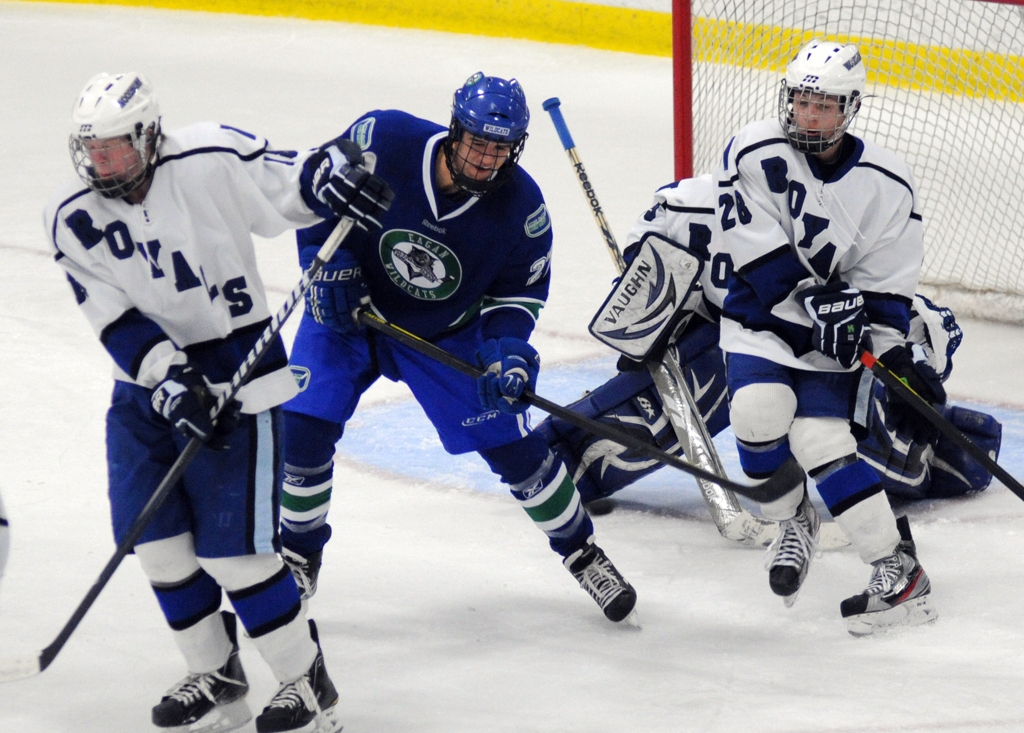 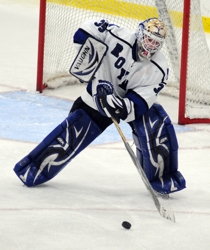 Woodbury's Josh Erickson made 43 saves on 46 shots in what coach Wes Bolin called his best game of the year.

Late in the second period of the South St. Paul Premier Tournament championship, the scoreboard read 2-0 in favor of Woodbury.

Royals’ coach Wes Bolin certainly didn’t look that comfortable. Bolin had seen enough of his opponent, No. 4AA Eagan, over the last two years to know his team wasn’t going to cruise to an upset.

“They just keep coming and coming,” continued Bolin. “You tell me the difference between their second and third lines and their third and sixth D. They’re just solid and of course, they have superstars at the top.”

Even so, it wasn’t easy for Eagan against its Section 3AA rival.

Woodbury executed a near-flawless game plan in a game not many gave it a chance to win. After a scoreless first period, the Royals’ Ryan Winter shocked the favorites by rushing end-to-end for a shorthanded goal, then set up teammate Hayden Shaw for a power play tally just 2-1/2 minutes later. With time winding down in the second period, Woodbury led 2-0.

Eagan coach Mike Taylor gave Bolin and the Royals’ the ultimate compliment after the game, saying they developed a terrific strategy against his team. Except for a 2-minute, 56-second span on either side of the second intermission when Eagan scored all three of its goals, Woodbury frustrated the high-powered Wildcats by keeping shots away from the “danger zone” between the face off dots, taking the body whenever possible – and getting great goaltending from senior Josh Erickson.

“I thought Woodbury came out with a very good game plan and they executed that game plan well,” said Taylor, who also felt his team wasn’t as crisp as it could be in opening moments of the game.

Still, Eagan fired 46 shots on net and had another 27 blocked by the Royals’ defense – an NHL-playoff style defensive effort

“I was really impressed with the courage of our team,” said Bolin. “The willingness to do that and compete and battle against that team.

“That’s what you have to have to pull the upset. We came close to doing so.”

Close was not quite enough, as the Wildcats offense finally exploded.

Derick Kuchera started the three-goal rally with a top-shelf shot that nicked off the cross bar with less than two minutes left in the second. Nick Kuchera tied it up with just 12.6 seconds left in the period off a face off deep in Woodbury’s zone. And Michael Zajac ended the flurry with the game-winner on the power play just 1 minute, 3 seconds into the third.

“Our guys did answer the bell,” said Taylor. “We were able to turn it around.” 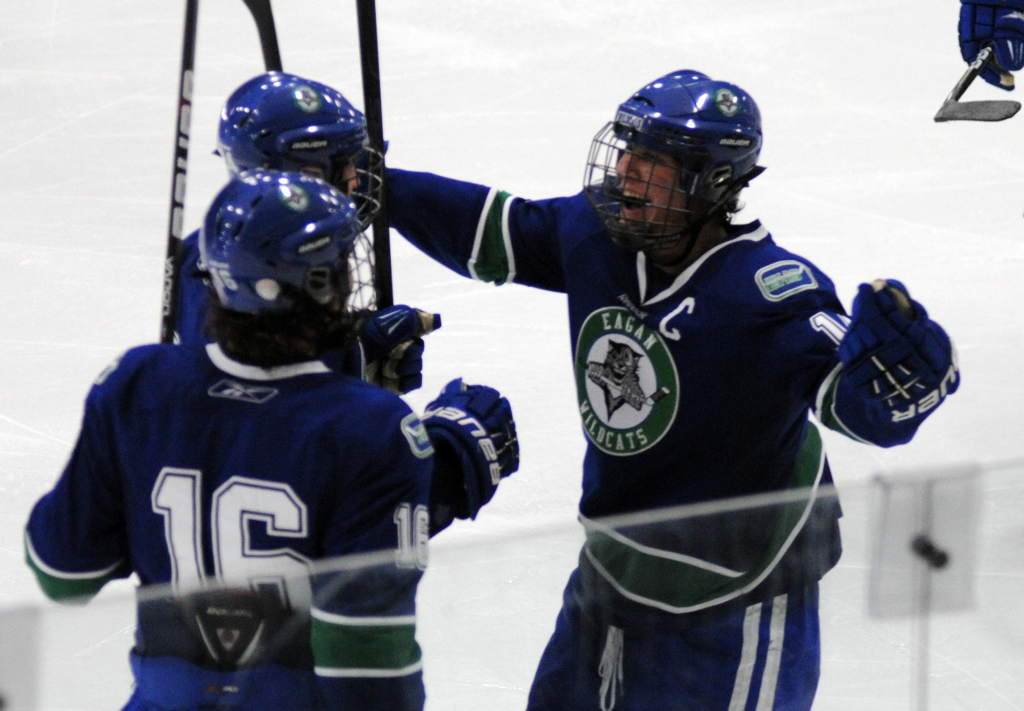 Competing strategies
Eagan coach Mike Taylor had his own offensive strategy against Woodbury goaltender Josh Erickson, who came into the game fresh off a semifinal shutout of North St. Paul in Tuesday’s semifinals.

“We tried to No. 1, get in front of Erickson and try to take away his eyes,” said Taylor. “And No. 2, have a quick release. You don’t have time to dust it. We wanted to dust it early and they got a stick on it, they got a shin pad on it.”

Erickson en fuego
Woodbury goaltender Josh Erickson might have taken an “L” on his stats, but Royals’ coach Wes Bolin called it the “best game of the year for Josh.” Erickson was called on to make 43 saves on 46 shots against a team that has as much offensive firepower as any in the state.
Erickson faced not only a constant barrage of shots, including 21 in the second period and 14 more in the third, he also had to contend with a Wildcat camped on the edge of his crease all night.

Eagan rallied from a two-goal deficit late in the second period to beat Woodbury in the championship game of the South St. Paul Premier Tournament Wednesday night at Wakota Arena.

Senior Michael Zajac netted the game-winner just 1 minute, 3 seconds into the third period, taking a pass from Will Merchant and driving it past a screened Josh Erickson in the Woodbury net. Zajac’s goal capped a three-goal flurry in a 2 minute, 56 second span on either side of the second intermission.

Derick Kuchera started the rally with a top-shelf shot that nicked off the cross bar with less than two minutes left in the second. Nick Kuchera tied it up with just 12.6 seconds left in the period off a face off deep in Woodbury’s zone.

After a scoreless first period, Ryan Winter got the Royals on the board with a length-of-the-ice shorthanded rush early in the second. He gathered in a loose puck in his defensive zone and split the Wildcats’ defensemen. Hayden Shaw gave Woodbury a 2-0 lead just 2-1/2 minutes later on a power play shot from the point.

Erickson played strong in nets for the Royals (6-4-2), making 43 saves. The disciplined Woodbury team defense was also a factor, as they blocked 27 more shots. Freshman goalie Andrew Lindgren had 13 stops for Eagan (8-1-0), including a pair during a 5-on-3 penalty kill over the final 1 minute, 34 seconds of the game.

1. Will Merchant, Eagan
Though he only recorded a single assist on the night, Merchant was a big part of Eagan's game and one of the key reasons for victory. His speed and puck control allowed the Wildcats to dominate possession for much of the final two periods, including on the game-winner when he fed teammate Michael Zajac.

2. Josh Erickson, Woodbury
Erickson faced a barrage of Eagan shots all game long and stood tall throughout. He made 43 saves and his defense blocked another 27 as the Wildcats set up a shooting gallery of sorts. Eagan tried to get bodies in front of Erickson and impair his vision, but it still didn't matter as he kept the Wildcats off the board until late in the second period.

3. Michael Zajac, Eagan
The big, fiesty forward had his usual powerful game. Dish out a few big hits, draw a couple of aggressive penalties, score the game-winning goal. Yep, Zajac's power play tally on a screen early in the third was the difference in a 3-2 game. 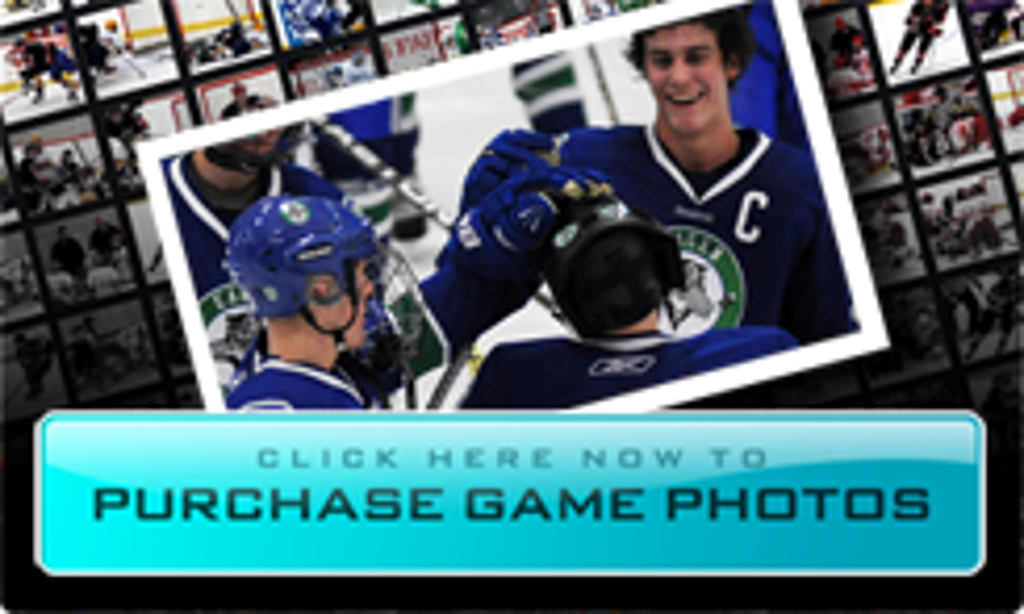