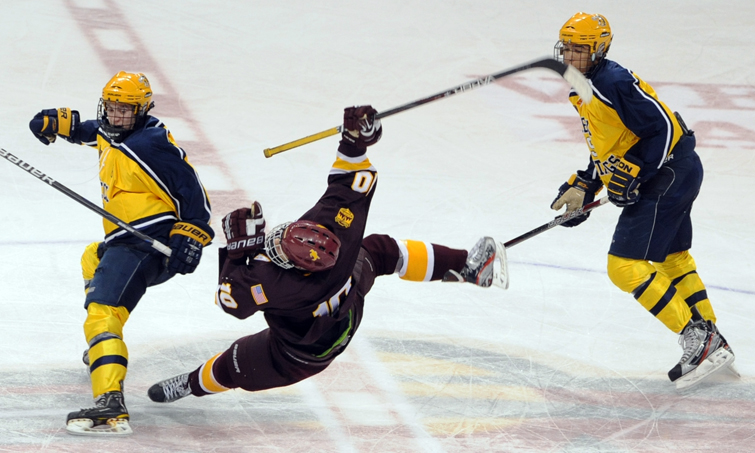 When Tyson Fulton got his feet moving, which was all the time, there was no stopping him.

Fulton was as good of a playmaker as he was a goal scorer, a deadly combination for opposing defenses.

Playing on a line with fellow speed merchants Mike Morin and Riley Borer, Fulton led Breck to back-to-back state Class 1A championships in 2009 and 2010.

“When I was a freshman he was a senior,” said Mustangs junior Matt Colford, who grew up in the same north suburban neighborhood as Fulton. “I wear the same number as he did. We both play center.

“I’ve known him since I was really little. I liked the way he played.”

It would be unfair to label Colford as a Fulton clone, but there are some striking similarities in their styles of play. Throw in linemates Thomas Lindstrom and Grant Opperman, each of whom have high-revving motors and butter-soft hands, and you have a line that can equal the Fulton-Morin-Borer combo.

Colford scored a goal and added three assists to lead the unbeaten and No. 1-ranked in Class 1A Mustangs to a dominating 5-1 triumph over Forest Lake on Wednesday, Dec. 28, in the championship game of the Schwan Cup Silver Division at the Xcel Energy Center in St. Paul.

Opperman, a senior who has committed to play at Division I Dartmouth, added two goals and an assist, and Lindstrom, a junior, had a goal and an assist.

“They’re smooth and they are skilled,” Breck coach Les Larson said about Colford’s line. “I think these guys are every bit as good as those guys (Fulton, Morin and Borer), and two of them are juniors.”

Colford has eight goals and team-best 19 assists this season. Only Opperman, with 29, has more points.

“He’s so shifty,” Opperman said about Colford. “Super slippery. He gets in the corners, he scrunches up and he slips right through checks all the time.

“And then he finds one of us in the slot. I like to shoot the puck, so it’s perfect.”

Breck improved to 10-0-0 with the victory over the Rangers. The Mustangs have now won two holiday tournaments this season. They beat traditional Class 1A powerhouses St. Cloud Cathedral and Duluth Marshall to win a Thanksgiving tournament in Duluth. Breck knocked off Class 2A programs Apple Valley and Lakeville South before winning the Silver Division title.

“We were telling the kids we want to come back here two months from now,” Larson said, “and we want to compete in that other tournament, too.”

Of course, that “other” tournament would be the state tournament. Opperman described Wednesday’s victory as a dress rehearsal for what the Mustangs hope will be a featured performance come March.

Certainly few teams in any class can match Breck goal-for-goal. The Mustangs have scored six or more goals in all but two of their games. They are averaging a shade under seven goals per game. The line of the Iverson brothers, Keegan and Wes, and center Conor Andrle is just effective – in a more physical manner – as Colford’s.

“We’re not like the Iverson line where they hit a lot,” Opperman said. “We’re a little bit more finesse.

“They do their thing, we do our thing. We like to get goals on the rush. We really like 3-on-2s. We like to capitalize on those.”

The Mustangs, ranked No. 1 in Class 1A in the Hockey Hub’s latest poll, rolled to a 5-1 victory against Forest Lake (5-5-1) and improved to 10-0 this season. High-powered Breck outshot the Rangers 48-24 and has scored at least four goals in each of its victories.

Matt Colford scored the game’s first goal and added three assists for the Mustangs. His power-play goal with 1 minute and five seconds to play in the first period gave Breck a 1-0 lead into intermission.

It did not last long. Forest Lake’s C.J. Franklin backhanded the equalizer into the net just 27 seconds into the second period to tie the game 1-1.

A beautiful Breck passing sequence freed up a shooting lane for Keegan Iverson and he buried the puck at 2:36. Thomas Lindstrom and Grant Opperman added goals and the Mustangs led 4-1 into the second intermission. Opperman scored again in the third period.

1. Matt Colford, Breck
The junior forward wasted little time leaving his mark on the game, scoring the lone goal in the first period to get Breck going. He was a force on the offensive side of the puck all night, collecting three helpers in the contest while generating numerous chances with a shrewd forecheck. Oh, and he was just inches from a five-point game – one of his flashy wrist shots clanked off the iron in the middle period.

2. Grant Opperman, Breck
With two goals and three points on the night, Opperman was one of the best players on the ice. Opperman’s second goal didn’t have much of an impact on the game, but it was a perfectly placed shape-angle marker. He and his linemates used some unmatched speed and anticipation to bottle Forest Lake in its own end for the majority of the night, too.

3. Keegan Iverson, Breck
A player with the skill and speed that Iverson brings is almost impossible to contain. Although the Rangers held him to only one goal, Iverson was still a mad man with the puck, successfully dangling around Forest Lake players for 51 minutes. If not for some big saves out of Brian Levorson, Iverson would have had a few more points to his credit. 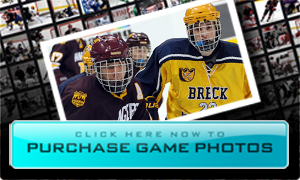