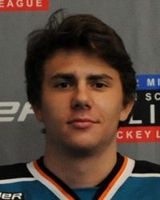 Though his Mustangs led Forest Lake 3-1 in the second period, Larson couldn't relax until senior Grant Opperman swooped in to put away a rebound. Opperman later scored again in the Mustangs' 5-1 victory at the Xcel Energy Center.

"We were outplaying them but we just couldn't score," Larson said. "All of a sudden he cranks it up and delivers, and we're just fine."

Opperman began this week leading Breck, ranked No. 1 in Class 1A, with 13 goals and 29 points. But he means much more to the Golden Valley private school. He's a model student and talented hockey player bound for Dartmouth.

"When you look for Breck in the dictionary, his picture should be next to it," Larson said.

Q I imagine it's a nice milestone at this point of the season to win the Schwan Cup Silver Division tournament.

A We were playing three big schools, and it's another step up. ... I think we played our best game [against Forest Lake]. It's going to give us a lot of confidence from here on out.

Q You played youth hockey for Wayzata with [Benilde-St. Margaret's] Grant Besse and [Notre Dame recruit] Mario Lucia on your line. Sounds like quite a line.

A I was the center. Besse was on my right, Mario was on my left. I've been best buddies with Besse since kindergarten. Mario was just back earlier this week from Penticton. We hung out every day and had about four sleepovers. Those two are unbelievable players. Mario and I shoot pucks in my basement and sometimes I get a little mesmerized at how well he shoots the puck. I played in the Elite League with Besse this year.

There are different things I take from both of them, Mario's hands and shooting and Besse's speed. It's great having them around because they are going to make you work harder. You don't want to be the worst one out of the three. On a side note, I'm pretty sure I beat them both in points that year in Bantams. Mostly on assists.

Q Coach Larson said you're fluent in Chinese. How long have you been studying the language?

A We have Chinese at Breck from kindergarten up. I don't know if I'm fluent quite yet but I'm getting there. It's a hard language. You pronounce words just a little bit off and instead of saying, 'Hey, what's up?' you're saying, 'Hey, let's fight.'

Q Coach Larson also said he's impressed with how hungry you are this year. He said lesser guys might have slacked off a bit.

A Well, I was on varsity as a sophomore and I learned a lot from guys like Mike Morin, Tyson Fulton and Riley Borer. They didn't take shifts off. They didn't take drills off. The leaders on this team want to lead by example the same way.

Q Is some of that mindset built in by your loss in the state tournament quarterfinals last season?

A We were up going into the third period and we blew it. It's still in the back of your mind and will be for a long time. When we go in after the second period and we're up, we try to keep things in check because it can go away fast.