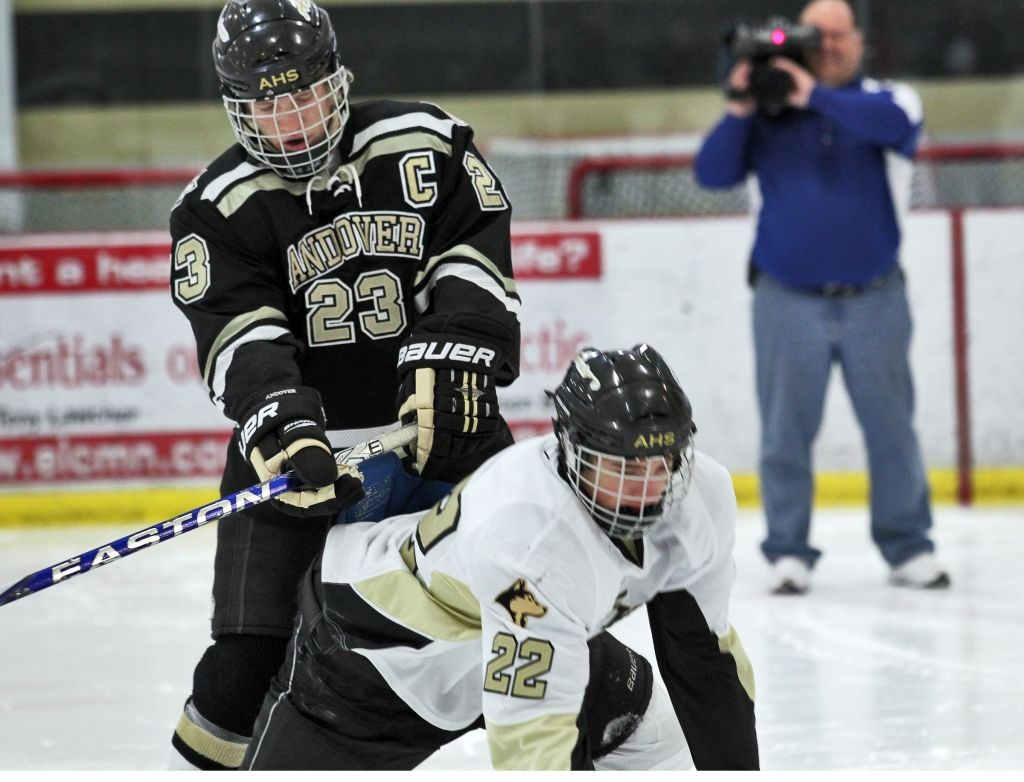 The Minnesota State High School League is imposing tougher penalties for hockey players who are called for checking from behind, boarding and head contact. Officials filmed a training video with Andover High School hockey players.

The Minnesota State High School League will impose tougher penalties for three of hockey's most dangerous infractions after an illegal hit to a Twin Cities high school player.

Beginning with games Monday, players called for a check from behind, boarding or head contact will get at least a five-minute major penalty. The "major" designation puts the player's team at greater risk of being scored on because it must play shorthanded for the duration.

The measure is aimed at making players aware of serious injuries their bigger, faster and stronger bodies can cause or sustain through reckless physical play.

Its approval by the National Federation of State High School Associations comes barely two weeks after Benilde-St. Margaret's sophomore Jack Jablonski was paralyzed from crashing headfirst into the boards after a check from behind.

It's also the boldest action by far amid other recent calls to make youth hockey safer.

MSHSL Executive Director Dave Stead said never in his 26 years with the league has such a major change been approved so quickly and implemented midseason.

"It's sending a message to the hockey player, 'We need you to know we don't want this behavior,' " MSHSL board member Craig Perry said. "Those three [infractions] produce the greatest risk for our participants to sustain a traumatic or catastrophic injury."

Perry and the league's hockey advisory committee met Tuesday and proposed the tougher penalty structure. The NFHS approved the change in less than 24 hours.

The MSHSL made the change effective after Saturday's games, allowing the majority of the state's 280 high school teams two days to prepare. Most hockey teams will play their next game Tuesday.

"The awareness is a good start," Andover boys' coach Mark Manney said. "It's up to the kids to follow through with the guidance they're given."

Boarding no longer a way out

Checking from behind formerly drew a two-minute minor and a 10-minute misconduct penalty at the minimum. Officials had the discretion to elevate the penalty, as they did in the Jablonski case, to a five-minute penalty and game ejection.

Similar discretion was applied to boarding, which involves any contact that sends a player violently into the boards. It drew a minimum two-minute minor penalty.

Officials said they sometimes called boarding instead of checking from behind to avoid the wrath of coaches and parents who objected to players sitting out almost a third of the game.

Elevating both penalties to five-minute majors "will make it very cut and dried as opposed to having another option," veteran official C.J. Beaurline said.

Perry said the mission to make the game safer led the advisory committee, which included heads of the coaches and officials associations, to reach a swift, uncharacteristic consensus. "There's no question that what has taken place the past couple weeks has tied everybody together," he said.

The league filmed a training video, to be posted on its website in about a week, to educate players, coaches and officials on proper checking technique and illegal hits.

Jablonski suffered a severed spinal cord during a junior varsity game against Wayzata on Dec. 30. Doctors are doubtful he will regain use of his legs.

His injury put a face on what coaches and officials fear -- and take some responsibility for -- is a higher tolerance for potentially dangerous hits. There were 28 game ejections for checking from behind in roughly the first month of Minnesota varsity and junior varsity boys' and girls' games.

"Now maybe you rub a guy out and stay away," Jokinen said. "It'll still be a physical game. It's just a smarter way of being physical."

Bill Kronschnabel, the MSHSL's coordinator of hockey officials, said he hopes "the institution of the new tolerance level is going to keep everybody at a more subdued and safer level."

The MSHSL change is the latest example of heightened awareness to the dangers of violent hits.

USA Hockey and its state affiliate, Minnesota Hockey, sent an open letter last week urging coaches, officials and players to talk before practices and games about dangerous hits. The high school league issued a similar memo the week before.

A Minneapolis hockey organization launched a website last week encouraging players from 4-year-olds to high school stars and older to sign a pledge in Jablonski's name to skate more safely.

"Jack said this morning, 'Mom, it's not about the hitting; it's the way we hit,' " Leslie Jablonski said Thursday. "We need to teach players how to hit properly. We're not trying to take that out of the game."

Andover's Manney believes the MSHSL's tougher penalties achieve that balance. They're aimed at dangerous plays that "weren't hockey to begin with," he said. "This was kids seeking vengeance on other kids."