Jack Jablonski says he's grateful for support, is focused on the future. 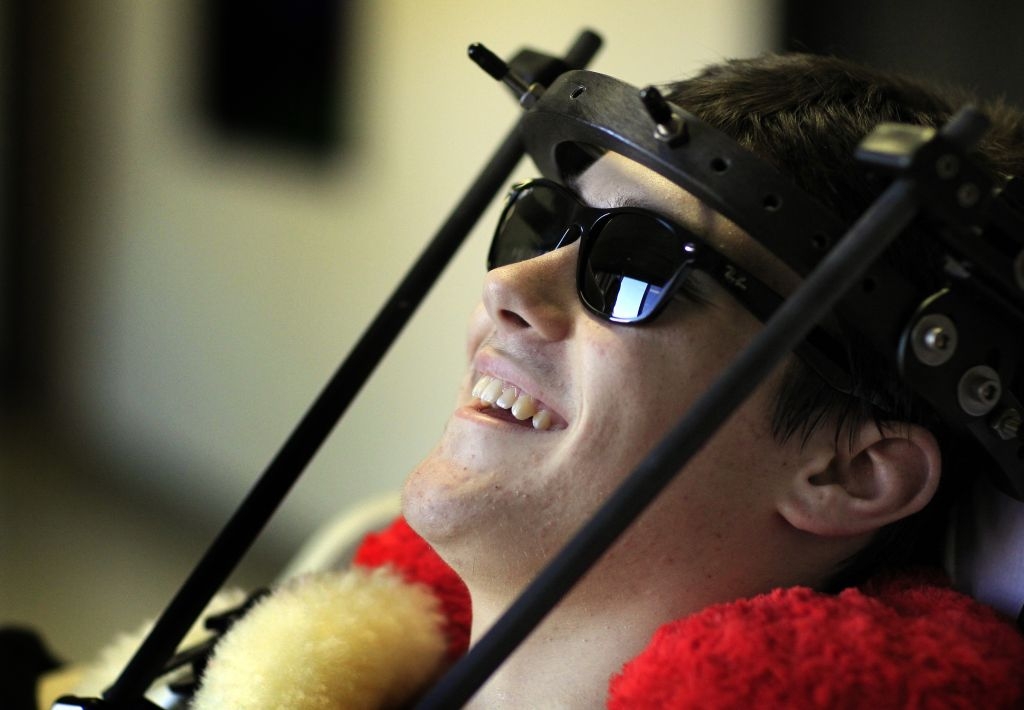 Jack Jablonski said he wants to graduate from high school with his class. Then, on to college and a career related to hockey.

The teenaged visitors left the dimly lit hospital room quietly. Amid the sea of get-well balloons and autographed sports jerseys, it would soon be time for Jack Jablonski to work on strengthening his shoulders and maximizing the movement in his arms.

It has been three weeks since the 16-year-old Jablonski was slammed against the boards in a hockey game, fell to the ice and couldn't get up on the count of five, couldn't feel his body. The hit severely bruised and possibly severed his spinal cord, and doctors have delivered a devastating prognosis: He will not walk again and will have limited use of his arms.

In one of his first interviews, Jablonski on Thursday expressed firm resolve to live a full life. He is focusing on the movement he has in his arms and setting goals for returning to school.

Sometimes he's so cheered by the displays of support that he can forget about his injuries for a few moments. Vikings linebacker Chad Greenway visited him Thursday. Singer Taylor Swift sent a personalized, autographed photo earlier this week. The varsity player talks hockey with his teammates. He thanks everyone for visiting. He smiles at them all.

"When I'm visiting with all these people and talking to everyone, I don't have a headache," he said just after some friends shuffled out the door. "That's the touching part. All of these people want to help and it's crazy what they'll do to put a smile on my face. I just want to put a smile on their face and know they helped out."

Sometimes, when it's quiet at night and he can't sleep, his mind races with thoughts of an uncertain future. He forces himself to try to think about something positive and about goals: He wants to start his junior year with his classmates at Benilde-St. Margaret's in the fall. He wants to go to college. He wants to work in a career related to hockey.

Jablonski has spent most of the past three weeks on his back. Last week, the hospital staff began moving him into a large chair periodically so he can sit upright for about an hour at a time. A halo stabilizing his head is connected to a brace on the trunk of his body. He hates it, his mother said, but it protects him during a delicate state of healing to keep his spine in alignment.

He knows the coming months and years will be a rollercoaster, he said, but so far he's had more ups than downs.

"It can't get any worse, so why think bad about it," he said. "Embrace the support and everyone's help ... that's what helps me out -- everyone, like, wanting to help."

Jablonski said he understands his prognosis, but as much as possible he wants to prove his doctors wrong. His family is putting part of their hopes in advancing scientific research and technology. They expect Jack to be moved to a rehabilitation center soon, and he is eager to see what that brings.

"I want to go over there and I want to start doing stuff. I look forward to getting into all these chairs or devices," he said. "I want to go move around and strive and get better."

Thursday afternoon, 18-year-old hospital patient Jenna Privette, who suffered a spinal injury during a hockey game on Jan. 6, rolled into Jablonski's room, her mother pushing her wheelchair. She delivered a blanket to Jack. It was the first time they had met.

Privette told Jablonski that the blanket threads were woven with prayers, just like a blanket that friends from her school delivered to her. Doctors have said Privette's spinal cord is not severed, and her family is hopeful that she will be able to walk again, as she did after a similar injury in 2008. The two teenagers held their mothers' hands along with Jack's brother, Max, in prayer. The mothers took pictures of their injured children side-by-side.

Before Privette and her mother left, Jenna and Jack agreed to talk again, to discuss an ordeal that few others can truly understand.

The room quiet again, Jablonski continued in his reflection. He hasn't been allowed to think like a kid the past few weeks, he said, and rolled his eyes in a joke: "I understand I probably needed to grow up a bit."

It's uncomfortable not knowing what the future holds, he said, before reasoning that nobody does.

"Whatever normal is at the time, I have to accept it," he said. "This is like a calling almost ... It's a mystery, but at the same time it's got to mean something."