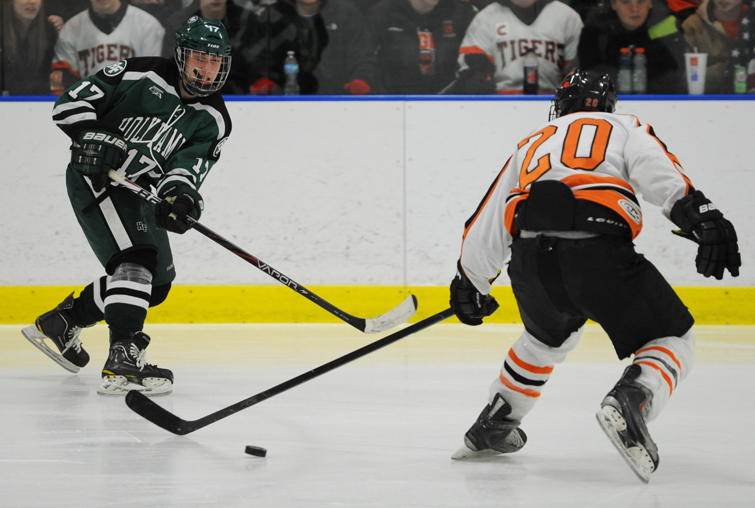 Defense might as well be an incurable disease, rabid badger or bin of rotten food based on the way Holy Family Catholic has approached it at times this season.

Indifferent is a kind way to describe the Fire’s attitude toward preventing goals.
The low point came in a humbling loss to west metro neighbor Waconia on Jan. 12.
“Against Waconia both of us had pretty poor performances,” said sophomore defenseman Dylan Woolf, his blue line partner and fellow sophomore Ryan Swanson standing next him and nodding in agreement about a game in which the Fire allowed a whopping seven goals.
Since that loss there has been a rededication of sorts. Holy Family Catholic practices have been sharply tilted toward the defensive zone. 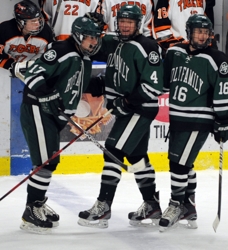 “We’ve been giving up a lot of goals the last five or six games, and we’ve been working in our D zone a lot,” Holy Family Catholic coach Noel Rahn said. “Tonight, against a very good team like (Delano), a team that has got some firepower, I think we held them in check except for that last goal they had.”
The run-and-gun Fire unveiled a new and drastically different approach in their 3-1 win over Delano on Tuesday, Jan. 24.
Keeping the Tigers’ shots from the outside, limiting their odd-man rushes and keeping the front of the goal clear of bodies and pucks, Holy Family Catholic all but silenced a Delano offense that had been averaging close to five goals per game.
“I thought Holy Family did just an outstanding job of not giving us second chances around the net, of not giving us open ice in front of the net,” Delano coach Steve Brown said. “They did a great job, they took away ice, they took away ice in their zone, they backchecked very aggressively.
“It got to us a little bit.”
Leading the Fire’s defensive renaissance are Woolf and Swanson, who aren’t just heavy hitters and slick puck movers. They are dangerous offensively, too, as Delano discovered.
Swanson and Woolf each banked point shots in off the post against the Tigers, and each finished with a goal and two assists.
“We’ve been complementing each other well,” Swanson said. “D to D passes, just giving each other time with the puck really helps.”
Swanson ranks third on the Fire in scoring with 23 points, and Woolf is tied for fourth with  20.
“They are just really, really good hockey players,” Rahn said. “Those kids are going to be high end D guys who are going to play college hockey. They are only sophomores, they log a ton of minutes, they kill all the key penalties.
“Those two guys are something special.”

Swanson scored on a shot from the point in the first period to put the Fire ahead 1-0, and he assisted on Woolf’s power-play goal late in the third period that made it 3-0.
Delano’s Jack Nelson dashed Holy Family Catholic’s shutout bid when he scored on a goalmouth scramble with 2:42 remaining.
Holy Family Catholic (12-5-0) entered the night averaging just more than seven goals a game, and Delano (12-6-0) was averaging just less than five. But the expected shootout instead became a goaltenders’ duel between Schreiter and Delano senior Ryan Pinoniemi, who also finished with 30 saves.
Freshman forward John Peterson also scored for Holy Family Catholic, with his second-period goal coming on a power play.
Holy Family Catholic when 2-for-11 on the power play while Delano was 0-for-2. The Tigers took two unsportsmanlike conduct penalties among their seven infractions in the third period. 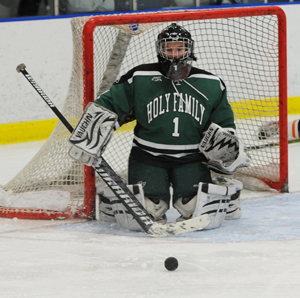 1. Ryan Swanson, Holy Family Catholic
The sophomore defenseman was good in every zone. He scored the Fire’s firs goal, assisted on their other two, was responsible for some of the biggest hits in neutral ice and took care of business in the defensive zone, where Delano was afforded precious few clean shots on goal or second-chance opportunities.
2. Nick Schreiter, Holy Family Catholic
The sophomore goaltender was good on low shots, high shots and all shots in between, steering most of his 30 saves into the corner or the netting above the goal. He came just less than 3 minutes from a shutout against a team loaded with offensive firepower.
3. Ryan Pinoniemi, Delano
The senior goaltender made even the toughest of his 30 saves look routine, and two of the goals he allowed came on power plays. Pinoniemi made one of his saves with his head, and as a result the puck shattered his plastic neck guard. After a short delay to repair his equipment, he was back in goal swatting pucks – and bodies – out of the crease area. 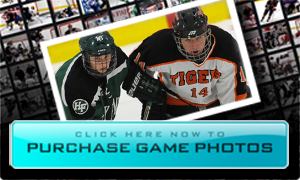