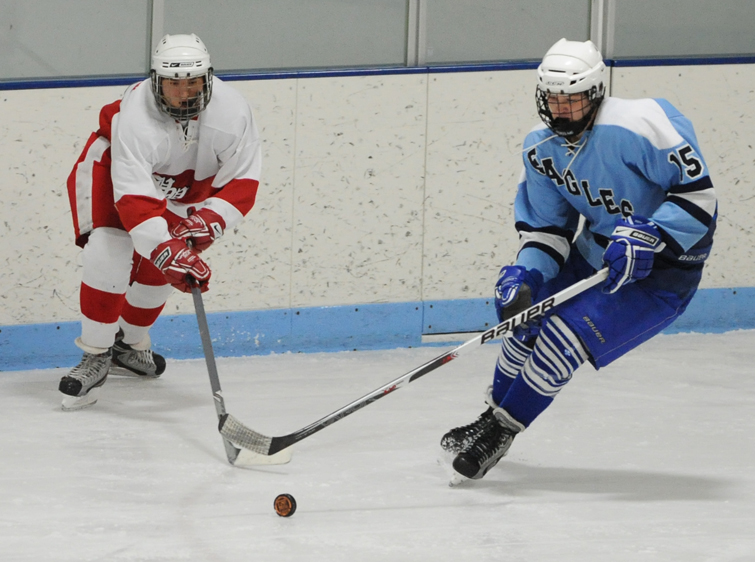 Injuries were becoming a problem. So were the penalties.
Just when it seemed most everything was going wrong for Becker/Big Lake, the puck landed on the stick of senior Adam Hayes.
“He’s the best athlete in our school,” Eagles coach Jon Samuelson said. “And our hardest worker.”
Hayes proved he isn’t a bad scorer, either.
He scored twice in a span of 1 minute, 50 seconds in the second period to power Becker/Big Lake to a 4-3 victory over St. Paul Highland Park on Thursday, Feb. 9, at Highland Arena. 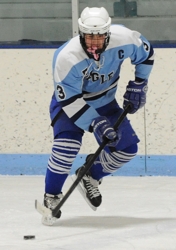 “He’s a big player out there for us,” Hayes said about Eagles leading scorer Ben Cencer, who exited the game with a shoulder injury. “I had a role to fill tonight -- a little higher than usual.”
Hayes scored his first goal when Highland Park goaltender Howie Sands was caught well out of the net after beating two Eagles players to a loose puck but was unsuccessful in his attempt to pass it out of the zone. Hayes needed only to deposit the puck into the open net.
For his next trick, Hayes pounced on a turnover at the blue line and then rifled a shot over Sands’ catching glove on a shorthanded breakaway for goal No. 2.
Just like that, the Eagles led 4-1. Senior goaltender Alex Darsow took over from there. Darsow made 14 saves in the second period and 13 more in the third.
“He was lights out tonight, stacking his pads, spread eagled and everything,” Hayes said. “He was on his game tonight.”
The Hayes-Darsow combination was good enough to allow the Eagles to secure their seventh victory, more than double the three wins they had last season.
“We said as seniors we wanted to have that star season,” said Hayes, who has 15 goals and 15 assists. “This season we are really making a name for ourselves. It’s really nice to get back on the winning track.”

Highland Park has night to remember 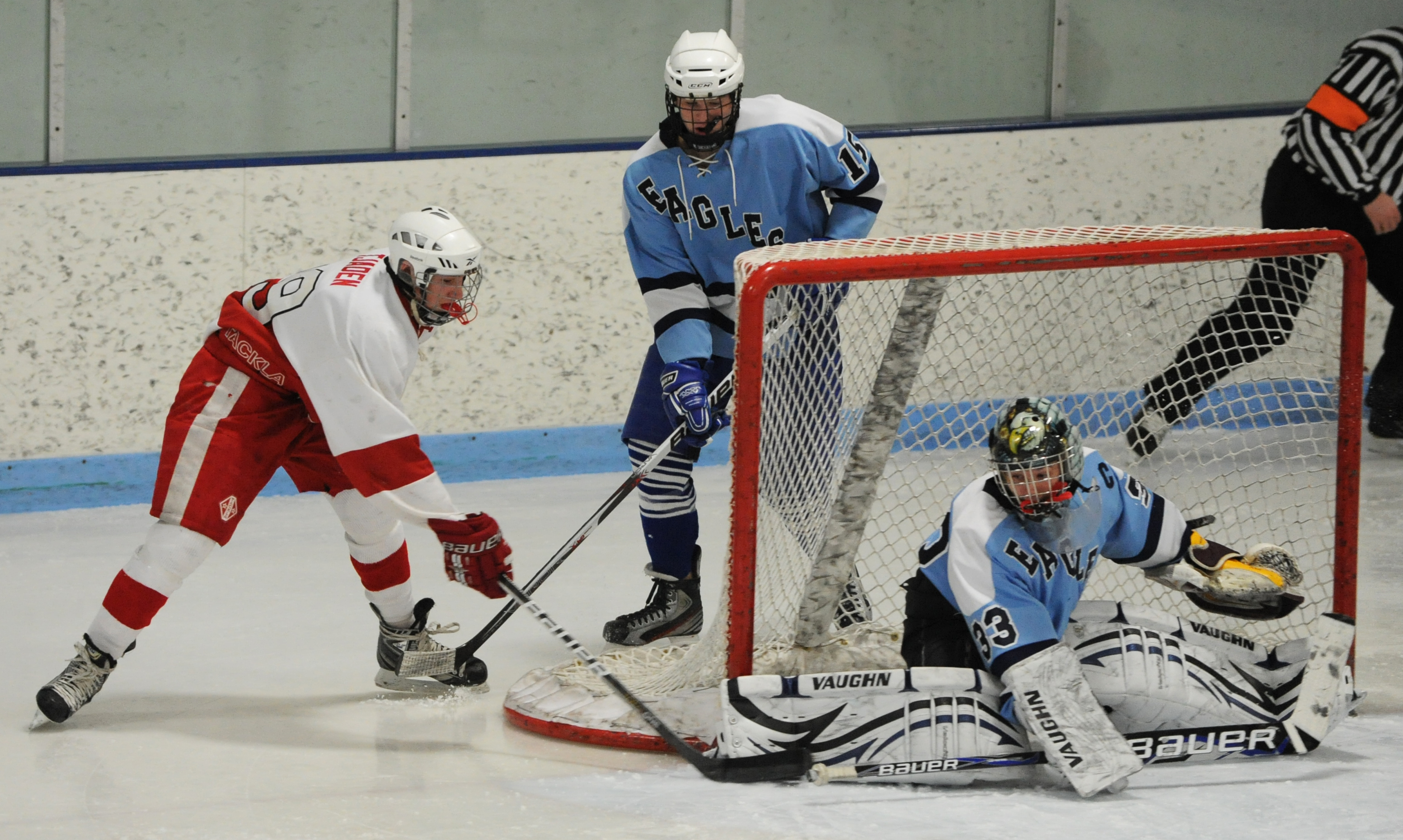 The band played and the crowd roared.
There were big hits and, clutch saves. There was a penalty shot and a stirring comeback.
Hockey returned to St. Paul Highland Park High School four years ago, but this was the night that all those involved in the resurrection of a program that had been left for dead for more than 20 years ago had envisioned.
“When we came out for warmups and the band was playing, I’ve never experienced anything like that before,” Highland Park senior Adam Tjaden said. “That was pretty great. That got me going.”
Tjaden scored a late goal and added an assist, but it wasn’t enough as Becker/Big Lake escaped Highland Arena with a 4-3 victory over the Scots on Thursday, Feb. 10.
The final outcome was a merely a footnote on this night, as St. Paul Highland Park’s hockey program, shut down in 1987 and revived in the form of a varsity team last season, came out a big winner.
“These are the experiences that they want,” Highland Park coach Tom Doyle said about the raucous electric atmosphere on the Scots’ Senior Night.  “It makes it as fun of an experience for these guys as it can be. 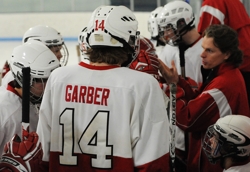 Highland Park head coach Tom Doyle gives instructions to his player during a time out against Becker/Big Lake. Photo by Helen Nelson

“That’s why next year we want to make sure we have all of our home games here. We’ll do whatever we have to do to make that happen.”
Seven of the 16 players on Highland Park’s roster are seniors. The Scots don’t have a junior varsity program. There has been speculation there might not be enough players to field a team next season.
Highland Park recently turned down overtures from St. Paul Academy to form a co-operative program. Doyle and Highland Park athletic director David DiMagno, among others, attended a meeting on Thursday morning to discuss the future of the Scots’ program and the outlook of St. Paul public school hockey (St. Paul Johnson could be facing a player shortage next season) in general.
“We’re really excited about Highland Park hockey,” DiMagno said.
Doyle believes he can replenish the Scots’ roster next season with players from the Highland Park Bantam program and hockey playing students who didn’t come out for the team this season.
“The plan right now is to keep moving forward,” Doyle said. “We’re excited about Highland hockey and continuing to grow it.”
The Scots went 0-25-0 in their varsity return last season. They lost their first 12 games this season before beating Mankato East 6-5 on Jan. 9 on a goal by Tjaden with two seconds remaining. Counting that victory, Highland Park is 4-5-0 in its last nine games.
“It feels good to go out there and get the wins,” Tjaden said. “Once we got over that hump, we were going to pick up momentum and feel better as a team.
“I knew we could get more wins.”

Senior Adam Hayes scored twice in a span of less than 2 minutes in the second period and senior goaltender Alex Darsow made 35 saves – including one on a penalty shot -- to lead Becker/Big Lake to a 4-3 victory over St. Paul Highland Park on Thursday, Feb. 9, at Highland Arena in St. Paul.
Both of Hayes’ goals were of the unusual variety. His first came after Scots’ goaltender Howie Sands skated 30 feet from the net to play the puck, only to have it end up on the stick of Hayes, who deposited it into the open net.
Hayes scored 1 minute, 50 seconds later while killing an Eagles’ penalty. He forced a turnover and skated in alone on Sands, firing a shot into the upper right corner to put Becker/Big Lake ahead 4-1 with 2:33 left in the second.
Highland Park’s Dylan Zavoral scored with 1:52 left in the second to make it 4-2, and Scots leading scorer Adam Tjaden made it 4-3 when he beat Darsow with a wrist shot with 2:20 remaining.
Becker/Big Lake (7-13-1) was whistled for three consecutive penalties in the third period but did not allow the Scots (4-17-0) to score. Darsow was a big reason for the stellar defensive effort, as he made 13 of his saves in the final period.
Darsow also stopped a penalty shot attempt by Highland Park’s Jordan Gregersen in the second period.
Zack Veau and and Jason Tonneslan scored in the first period for Becker/Becker Lake.
Freshman Oakley Bury scored in the second period as Highland Park closed to within 2-1.
Sands finished with 15 saves for Highland Park, a second-year varsity program that went winless last season.

1. Adam Hayes, Becker/Big Lake
A gifted athlete who also plays football, Hayes provided the clutch scoring the Eagles’ need after leading scoring Ben Cencer was knocked out of the game with a shoulder inury. Hayes scored twice in a span of 1 minute, 50 seconds in the second period as Becker/Big Lake surged to a 4-1 lead.
2. Adam Tjaden, St. Paul Highland Park
A senior who leads the Scots in scoring, Tjaden repeatedly fired shots from all angles at standout Becker/Big Lake goaltender Alex Darsow. Tjaden scored to pull Highland Park to within 4-3 with less than 3 minutes remaining and also notched an assist.
3. Alex Darsow, Becker/Big Lake
Darsow, a senior, likes to stay busy, so his 35-save performance suited him just fine. He repeatedly snared pucks with his glove hand and was extra sharp on numerous close-range chances for the Scots, giving them little to nothing at which to shoot. 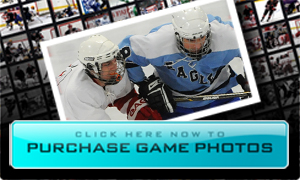