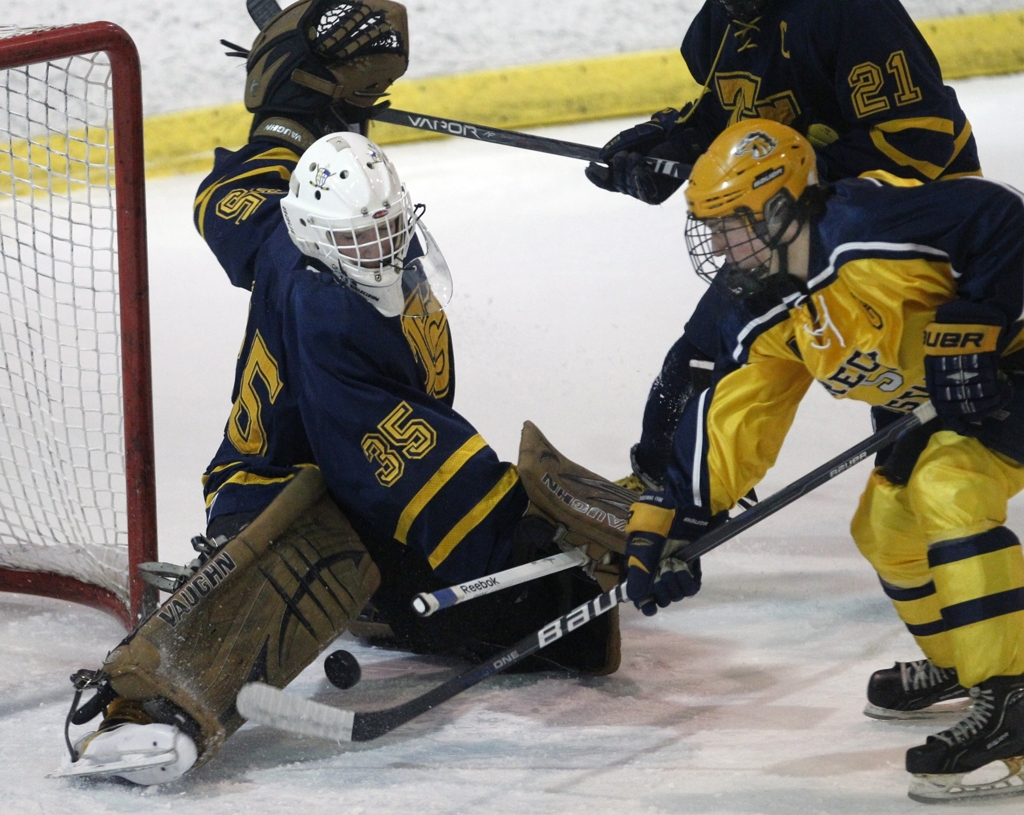 Andrew McDonald scraped ice from his stick near his Totino-Grace teammates packed tight in postgame celebration.

You would have expected it to melt.

McDonald's hot stick fueled the No. 6 Eagles' 7-4 upset victory at No. 3 Breck in a showdown of top Class 1A hockey teams. All four of his goals came on the power play, helping his team erase deficits of 2-0 and 4-1 in Thursday's rousing comeback victory.

Five of the Eagles' goals came on the power play. All four of McDonald's goals were scored as Breck served two 5-minute major penalties.

With his team holding a 4-3 lead, Breck forward Grant Opperman, named one of the 10 finalists for Mr. Hockey earlier on Thursday, drew a 5-minute major for boarding 1 minute and 22 seconds into the third period.

Teammate Wesley Iverson was later awarded a penalty shot and a chance to negate Opperman's penalty. But his shot missed the net. Then McDonald struck for two goals in a little more than a minute to give Totino-Grace a 5-4 lead.

The goals allowed McDonald and the Eagles (15-7-0) to continue where they had left off in the second period. McDonald scored two power-play goals just 34 seconds apart within the period's last two minutes and cut Breck's lead to a lone goal.

Earlier in the second, Breck (18-3-0) appeared to have delivered a knockout. Matt Colford scored to make it 4-1 Mustangs, a lead that loomed large given the Eagles' offensive woes. T.J. Roo hit the crossbar from close range while McDonald's breakaway chance ended up in goaltender Jack Kenney's glove.

The Eagles' keen power-play performance was missing in the first period. Breck outshot Totino-Grace 14-5 despite two Eagles' power plays. Opperman split two defenders and scored just one minute into the game. Mark Sharp added a second goal at 5:11, stuffing in a puck from close range.

In five previous games against teams ranked in the top-10 of Class 1A, Totino-Grace won two and lost three. The Eagles evened the ledger Thursday, beating a Breck team that won two of the past three Class 1A state titles and building momentum for the fast-approaching postseason.