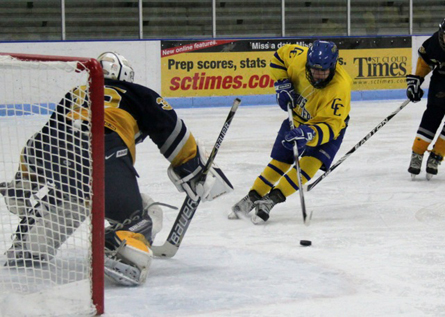 Four years ago on Hockey Day Minnesota, the state was introduced to young Corey Wheelock.
The then-13-year-old was featured on a FoxSportsNorth feature story that spotlighted his persistence while playing competitive hockey with a prosthetic right leg. It was a heart-warming story.
But we hadn’t seen anything yet.
Four years later, Wheelock is still playing hockey – and excelling at an even higher level.
He’s a senior on the St. Cloud Cathedral varsity – and a key contributor on a team that is 18-5-0 and ranked No. 7 in Class A.
Teammates immediately took to Wheelock’s dedication, voting him as an assistant captain. He also has two goals and five assists as a physical, grinding forward.
“He’s one of those guys who goes after things and leads by example,” Cathedral coach Eric Johnson said. “He’s really competitive and sometimes rubs guys the wrong way in practice. Teammates are sometimes, ‘jeez, back off.’ But his mentality is to go after things as hard as he can.”
It’s that work ethic and competitive spirit that has propelled Wheelock to the Cathedral varsity – and silenced more than a few doubters along the way.
Wheelock was born with a rare birth defect  -- fibular hemimelia -- which caused his right leg to stop growing midway down his shin. Doctors had to amputate his right leg below his knee as an infant. He learned to walk with a prosthetic leg – and hasn’t stopped moving on it since.
Wheelock hasn’t known anything different. Nor does he want to be treated any differently.
“I don’t take pity for it,” said Wheelock. “I don’t want to make excuses. Everyone has their own issues and they have to work through it.”
For the most part, while he’s on the ice it isn’t apparent that anything is unusual about Wheelock. Covered by the Crusaders’ yellow and blue socks, his prosthetic right leg may be slightly thinner than his left.  His stride may not be as symmetric, but it takes a practiced eye to see the difference.
The first time Cathedral coach Eric Johnson met Wheelock, he was managing at Acceleration Minnesota Sports Training Centers when the youngster came in for training. The other 11- and 12-year-old kids were wearing shorts, but Wheelock was in wind pants. Johnson noticed nothing different until Wheelock told him that he had a prosthetic leg.
Johnson did a double take and wondered if he was serious.
Yes, very serious – about hockey. 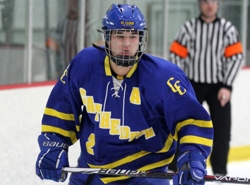 Corey Wheelock plays a physical style, but also is one of St. Cloud Cathedral's smartest players according to coach Eric Johnson. Photo by Jeff Wood

It wasn’t the last time Johnson had to reminded of Wheelock’s “handicap.”
“I don’t even know which leg his prosthetic one is,” admitted Johnson. “Half the time, we forget that he has one. The reason he plays is he does all the little things. He’ll block shots and finish checks. He does all the little things well and works very, very hard.”
Wheelock first cracked Johnson’s varsity lineup as a junior. In 20 games, he recorded a lone assist – but it was a dramatic first varsity point. He assisted on Jordan Revier’s game-winner with just 30 second left in overtime in a 5-4 victory over Delano/Rockford.
Wheelock was also part of the Crusaders’ Section 5A playoff roster, earning his spot with his hard work.
“He’s physical,” said Johnson, giving a quick scouting report on Wheelock. “He loves to bang bodies around. He’s really aggressive on the forecheck and is very smart, both academically and on the ice. That’s his biggest asset.”
This year Wheelock opened the season with his first varsity goal, scoring in the Crusaders’ second game of the year -- Nov. 26 against Providence Academy.
“It was a fun way to start off the year,” Wheelock said. “Especially because of the tough start against Breck (an 8-1 loss the night before). I was just glad to help out.”
“The guys were excited for him,” Johnson said. “But it’s become such a normal thing for us. There are either jokes made about (his prosthesis) or you don’t say anything about it. They were excited because of his personality, not his injury.”
That’s not to say there haven’t been a few memories created because of his prosthetic.
When Wheelock was a sophomore, it took his teammates a while to get used to the idea of it. Eventually, they used humor as a coping mechanism. Jordan Palusky, a senior on that 2009-10 team, was the instigator.
Palusky would steal one of Wheelock’s legs – he has different versions for everyday wear and for athletics – and hide it somewhere in the locker room. Sometimes the leg would be sticking out of a heating duct, sometimes poking out from under the benches, but always just in sight.
“Everyone was originally shy about it,” said Wheelock. “But once they saw how openly I talked about it, it wasn’t a huge deal.”
Wheelock also played on the U.S. Amputee Hockey Team as a freshman, earning a spot in the world championships. As part of the team’s tour, they visited the Walter Reed Medical Hospital in Bethesda, MD, visiting veterans who had recently had a limb amputated.
“We showed them what we could all do. It was kind of neat to see how they would react,” said Wheelock, who plans to study either biology or engineering at the University of Minnesota in the fall. He’d love to get into the field of prosthetics from a design standpoint while also playing club hockey and lacrosse.  “They saw that they wouldn’t be limited as much as they thought. Life isn’t over (with a prosthesis).
“You can still do everything you used to do.”