Battling through it all 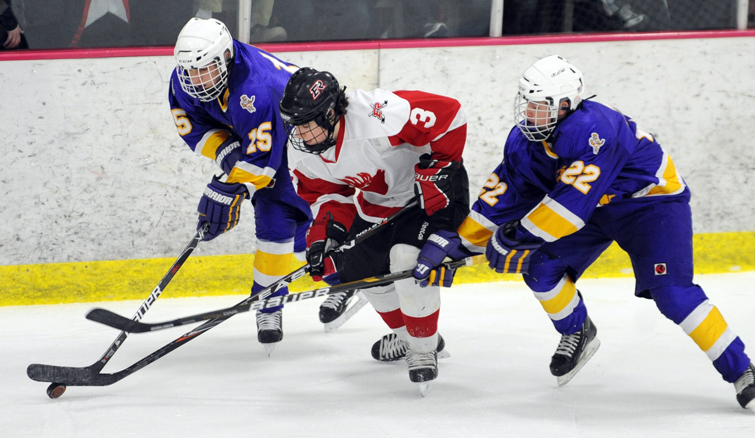 It's safe to say Elk River has not been a stranger to adversity this season.

After winning its first four games to start the season, the Elks struggled -- posting a 6-8-2 record in their next 16 games.

Then came the bombshell.

On Friday, Feb. 10, Tony Sarsland abruptly resigned as coach in the midst of his 27th year with Elk River.

Since Sarsland's departure, the Elks are 4-0-0 including victories over regular season No. 3-ranked Maple Grove and most recently a 4-3 Section 7AA quarterfinal win over Cloquet/Esko/Carlton on Tuesday, Feb. 21.

"From losing (Sarsland) we've really stepped forward," Elk River senior goaltender and captain Anders Franke said. "We haven't lost a game since he's been gone, and it just shows how much character we have in the locker room."

That character was needed as things started slow for the Elks in their section playoff game against Cloquet. After the first period, No. 4 seed Elk River found itself losing to No. 5 Cloquet 1-0.

Both the reasoning behind the opening deficit as well as the Elks' strong response could be attributed to Sarsland's absence.

"I'll take the blame for that," Elk River assistant coach Paul Berning said about being down early to Cloquet. "I didn't get a good scouting report on them -- we hadn't seen them all year. We were expecting the number three seed coming into this section. Tony (Sarsland) and I went and scouted Forest Lake and we had seen St. Michael."

Despite the Elk's assumptions and preparations, the Section 7AA committee had other plans.

"They didn't think we were that good up there," Berning said. "(We got) the fourth seed, so be it. It really doesn't matter -- you've got to beat the teams to get (to the state tournament) anyhow. If we're going to lose, we're going to lose playing our best hockey."

But after one period of play, Elk River clearly was not playing its best hockey against Cloquet down by one and being outshot 14-5, and without Sarsland to inspire a change in play, the Elks' tenured goaltender and leader needed to keep his team positive.

Elk River would score two-straight goals in the second period and add another two goals in the third period to defeat the Lumberjacks.

"With all the situation things that are going on here I give them credit," Cloquet coach David Esse said of Elk River. "They worked hard, they deserved to win, they threw pucks at the net and did what they had to do."

The section quarterfinal victory advances Elk River to the semifinals where the Elks will face Duluth East who are the top-seed in Section 7AA and are the top-ranked team in the state.

"I know Jake (Randolph), I know Dom (Toninato), I know Trevor (Olson), I know all those guys," Franke said. "I've played against them for four years. I know what they're like. I know they like to move the puck a lot. I know that I'm going to see a lot of shots and I gotta be able to move my feet pretty quickly that game."

While Franke knows he will have to be at the top of his game to upset the Greyhounds, his support system will be extensive.

"We're one big family," Berning said. "We're all in. They're a great group of kids that have bonded together."

As for the daunting task ahead to take on Duluth East, don't expect to see Elk River go quietly -- if at all.

"It's always great being the underdog," Franke said. "There's no pressure on you." 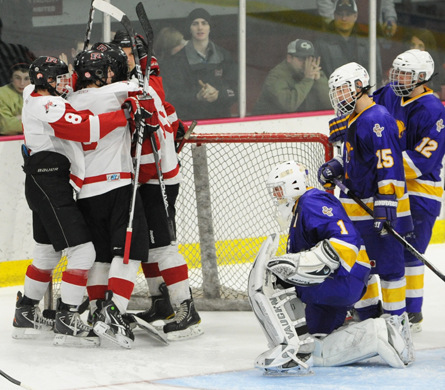 Four players scored for Elk River and goaltender Anders Franke made 26 saves as the Elks defeated Cloquet/Esko/Carlton, 4-3, in the Section 7AA quarterfinals on Tuesday, Feb. 21.

A goal by Westin Michaud gave Cloquet an early lead and the Lumberjacks outshot Elk River in the opening period, 14-5.

The Elks would respond in the second period with two straight goals by Andrew Zerban and Peter Jones. Cloquet answered with a goal by Beau Michaud to tie the game at 2-2 heading into the third period.

Elk River's Ryan Heid scored 91 seconds into the third after the Elks had peppered Cloquet goaltender John Scheuer with several shots to open the period. Heid's goal gave the Elks a 3-2 lead -- but it would be short-lived.

Cloquet's Westin Michaud scored his second goal of the game 32 seconds after Heid's goal; managing to beat Franke while falling to the ice on an acrobatic play to tie the game at 3-3.

Mitchell Kierstad would put the Elk River back on top for good scoring 52 seconds after Michaud capping off a wild 84 seconds of offense.

Westin (two goals, one assist) and Beau Michaud (one goal, two assists) ended with three points each and Scheuer finished with 30 saves for Cloquet as the Lumberjacks ended the season with a 17-8-0 record.

With the victory, Elk River improves its record to 15-8-2 and advances to the Section 7AA semifinals where the No. 4-seed Elks will face top-seeded Duluth East on Saturday, Feb. 25, at 10 a.m. at Amsoil Arena in Duluth. 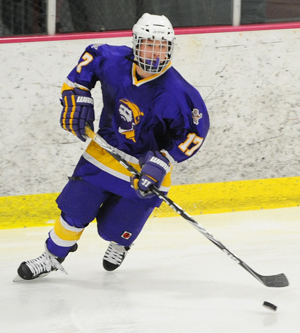 Luberjack's Westin Michaud (17) skates the puck up the ice. Photo by Helen Nelson

1.  Anders Franke, Elk River
His save total may not have been record breaking but his composure was second to none. Elk River relied on its senior captain to make a stop when needed and Franke answered with 26 saves -- several of them coming from point-blank range. The Elks' defense drastically improved between the first and second period with Franke leading the way.

2.  Westin Michaud, Cloquet/Esko/Carlton
The sophomore forward scored to give his team an early lead and forecasted an impressive offensive night. Michaud tallied an assist on a second period goal by his brother, Beau, but it was his third period goal that will have people talking. After taking a shot and collecting his own rebound, Michaud was checked to the ice but still managed to get a shot off and beat Elk River goaltender Anders Franke. Michaud's three point night kept the Cloquet in position to win. Beau, a junior, also finished with three points (one goal, two assists). 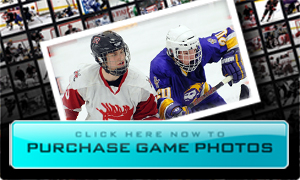