Benilde-St. Margaret's has abundance of inspiration, scoring in win over Holy Family Catholic 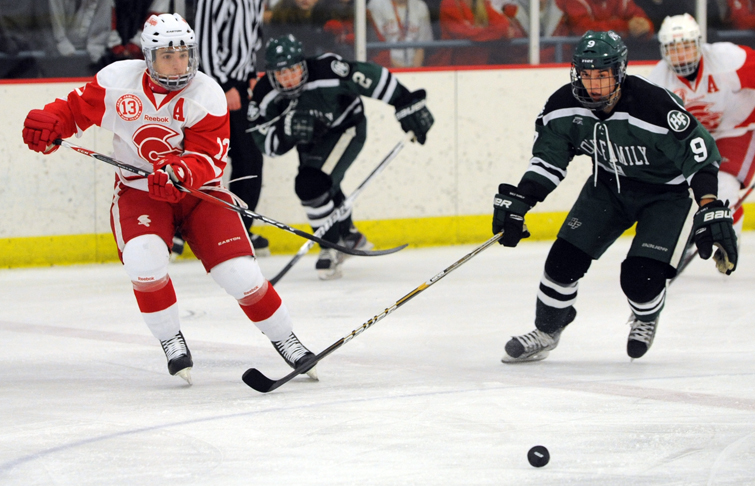 Jack Jablonski provides the inspiration, Grant Besse the goals.
Talk about an unbeatable combination.
Jablonski, a sophomore, made his first appearance at a Benilde-St. Margaret’s game since suffering a paralyzing spinal cord injury in a junior varsity game on Dec. 30.
Initially, doctors expressed doubt about whether Jablonski would regain the use of his arms.
Guess who was offering fist bumps as the Red Knights left the locker room and headed to the ice?
“I was walking out to go out onto the ice, and he lifted his arm up for a (fist) pound,” Benilde-St. Margaret’s senior Christian Horn said about Jablonski. “Stepping onto the ice you are nervous, and your heart kind of lifts up a little bit knowing that he can do that already.”
The No. 3-seeded Red Knights (20-6-0) routed No. 6 Holy Family Catholic (18-8-0) 7-0 at the St. Louis Park Rec Center, and Jablonski, confined to a motorized wheelchair, played a major role in the Section 6AA quarterfinal victory. 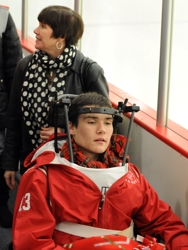 Jack Jablonski arrives with his mother, Leslie, to watch the game against Holy Family Catholic. Photo by Helen Nelson

“That’s one of the moments you can’t find words for,” Red Knights coach Ken Pauly said about Jablonski’s arrival in the arena. “It transcends the game, it transcends the state tournament, the sections, all that stuff. To have your friend and your teammate back in our home and in our locker room and all that, I just think it meant a great deal to the guys.
“All you have to do is take a look on their faces.”
Then there’s Besse, a junior, has been a goal-scoring phenom since he was a Pee Wee. Remarkably, he has managed to elevate his scoring feats beyond the stratosphere into depths-of-space territory. Besse, who has four goals and two assists against the Fire, has scored two or more goals in nine of the Red Knights’ last 12 games.
“You look at the kid,” Horn said. “No one really works harder than he does.”
Besse, who has committed to play at Wisconsin, used his speed to blow past Holy Family Catholic defensemen en route to two of his goals. Another goal came after he found a back-door opening on a power play, took a cross-ice pass and easily deposited the puck in the net.
There was a garbage goal, too. Besse finished off a goalmouth scramble by whacking a loose puck into the net. He was sticking his nose in the crease looking for another garbage goal in the third period when he was instead sent flying into the crossbar.
It can be dangerous business camping out in front of the net. Besse doesn’t care. Not a bit.
“Goals are goals in his mind, and he gets the same feeling,” Horn said. “Just like, if you think about, someone like Alex Ovechkin, someone who loves to score.
“Besse loves to score.”
The 5-foot-10, 175-pound Besse has 44 goals and 37 assists in 26 games. He and linemates T.J. Moore and Dan Labosky, also juniors, have been shredding opposing defenses all season. They form, easily, one of the top lines in the state.
Besse, of course, is the ringleader.
“He’s definitely a goal-scoring machine,” said Holy Family Catholic coach Noel Rahn. “He’s always been a gifted goal scorer. How he goes is how that team goes, obviously.
“The big question is will he be able to keep producing. Because if he is scoring goals it is going to be awfully tough to beat that team.”
Benilde-St. Margaret’s plays Robbinsdale Armstrong (7-17-1) in the section semifinals on Saturday at 7:30 p.m. at the Bloomington Ice Garden. The seventh-seeded Falcons stunned No. 2 seed Eden Prairie 2-1 on Thursday in the biggest upset of the state playoffs so far. 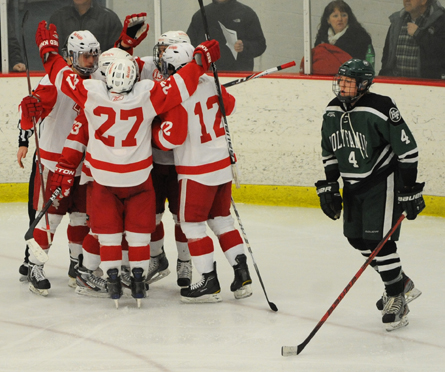 Holy Family Catholic hadn’t played in a game like this all season.
The Fire were miscast as marathoners attempting to run a series of sprints, and it showed.
“We have to get more (Class 2A) teams on our schedule,” Fire coach Noel Rahn said after his team’s 7-0 Section 6AA quarterfinal loss to Benilde-St. Margaret’s. “We got thrown into the fire here tonight.
“We play in a really good (Class 1A) conference,” Rahn said about the Wright County Conference. “But it was kind of a shock. When you are playing against a team like this you can coach them up all you want, but inexperience really hurt us tonight.”
Holy Family Catholic, a private school located in the west metro suburb of Victoria, opted to move up from Class 1A to the brutally tough Section 6AA so it could go toe-to-toe with state superpowers such as Benilde-St. Margaret’s, Eden Prairie, Minnetonka and Wayzata.
The result wasn’t much of a surprise, considering the Fire have more freshmen and sophomores (eight) on their roster than seniors (six). 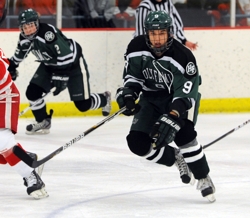 “We are very young still,” said Holy Family Catholic freshman Shane Gersich. “So I think we are only going to get better. We are going to take this experience and learn from it.”

Rahn already has beefed up the nonconference portion of the Fire’s schedule for next season. They will play section foes Wayzata and Benilde-St. Margaret’s and Class 1A powerhouses Breck and St. Thomas Academy. Rahn also is hoping to add Minnetonka and Eden Prairie, among other Class 2A schools.
The Fire, with an enrollment of 595, is the second smallest school in the state playing in Class 2A. Roseau, with an enrollment of 374, is the smallest.
Holy Family Catholic won 18 regular season games but did not play a team the possesses Benilde-St. Margaret’s speed. Not even close.
“That is the whole part about double-A hockey,” Rahn said. “There is a different gear between double A and single A. That’s the thing these kids need to see a little bit more of next year.”
Benilde-St. Margaret's coach Ken Pauly, who guided the Red Knights in their jump from Class 1A to 2A, says he sees a fast-rising program in Holy Family Catholic.
"I don’t think they are that far way at all, especially with a kid like Gersich," Pauly said. "You can build around him. That kid is special.
"It won’t be long until they sneak up to that No. 5 seed or that No. 4 seed. As long as they can hang onto that corps of young talent that they have … I don’t want to see them again."

Junior Grant Besse scored four goals and had two assists, and injured Jack Jablonski attended his first game after suffering a paralyzing injury as No. 3 seed Benilde-St. Margaret’s eased to a 7-0 victory over No. 6 Holy Family Catholic in the quarterfinals of the Section 6AA playoffs on Thursday, Feb. 23, at the St. Louis Park Rec Center.
The jaw-dropping performance was just the latest in a string of them for Besse, who finished the regular season by scoring 25 goals in his last 11 games. He has 81 points (44 goals, 37 assists) in 26 games this season.
Besse, who has committed to play at the University of Wisconsin, scored twice in each of the first and second periods as the Red Knights (20-6-0) raced to a 6-0 lead and forced running time to start the third. He fired a team-high nine shots on goal and finished a plus-4. Besse’s linemates, T.J. Moore and Dan Labosky, each had a goal and three assists and finished a plus-5.
Jablonski, in a motorized wheelchair, arrived at the rink through the Zamboni door about 40 minutes before game time and was in the Red Knights’ locker room before the game. He watched from the upper concourse and was one of the last of the Benilde-St. Margaret’s contingent to leave the building after the game.
Holy Family Catholic goaltender Nick Schreiter made 29 saves in the loss. The Fire (18-8-0) had opted up from Class 1A to 2A before this season and were facing a top-10 ranked big school for the first time. 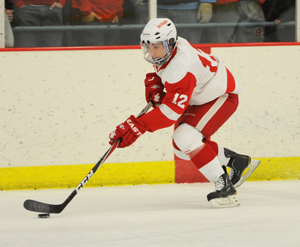 1. Grant Besse, Benilde-St. Margaret’s
Leaving no doubt he’s the sort of player who can lead a team to the state tournament – and championship – Besse repeatedly overwhelmed Holy Family Catholic’s defensemen with his speed en route to a four-goal, two-assist performance. Increasingly, Besse, a junior who has commited to play at Wisconsin, has been adding an element of grit to his game, and he scored at least one goal, and drew a penalty, by sticking his nose into the fray in the crease area.
2. Dan Labosky, Benilde-St. Margaret’s
Speaking of grit, the feisty Labosky also isn’t afraid to mix it up on front of the net in the corners or anywhere else, for that matter. He scored a goal, notched three assists and finished with a plus/minus rating of plus 5.
3. Justin Quale, Benilde-St. Margaret’s
He stopped 21 shots before exiting midway through the third period. Not a bad performance considering he was playing against the state’s third-highest scoring team and the top two freshman scorers in the Fire’s John Peterson and Shane Gersich. 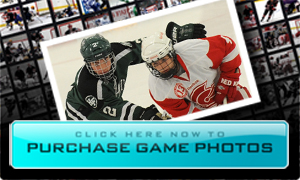