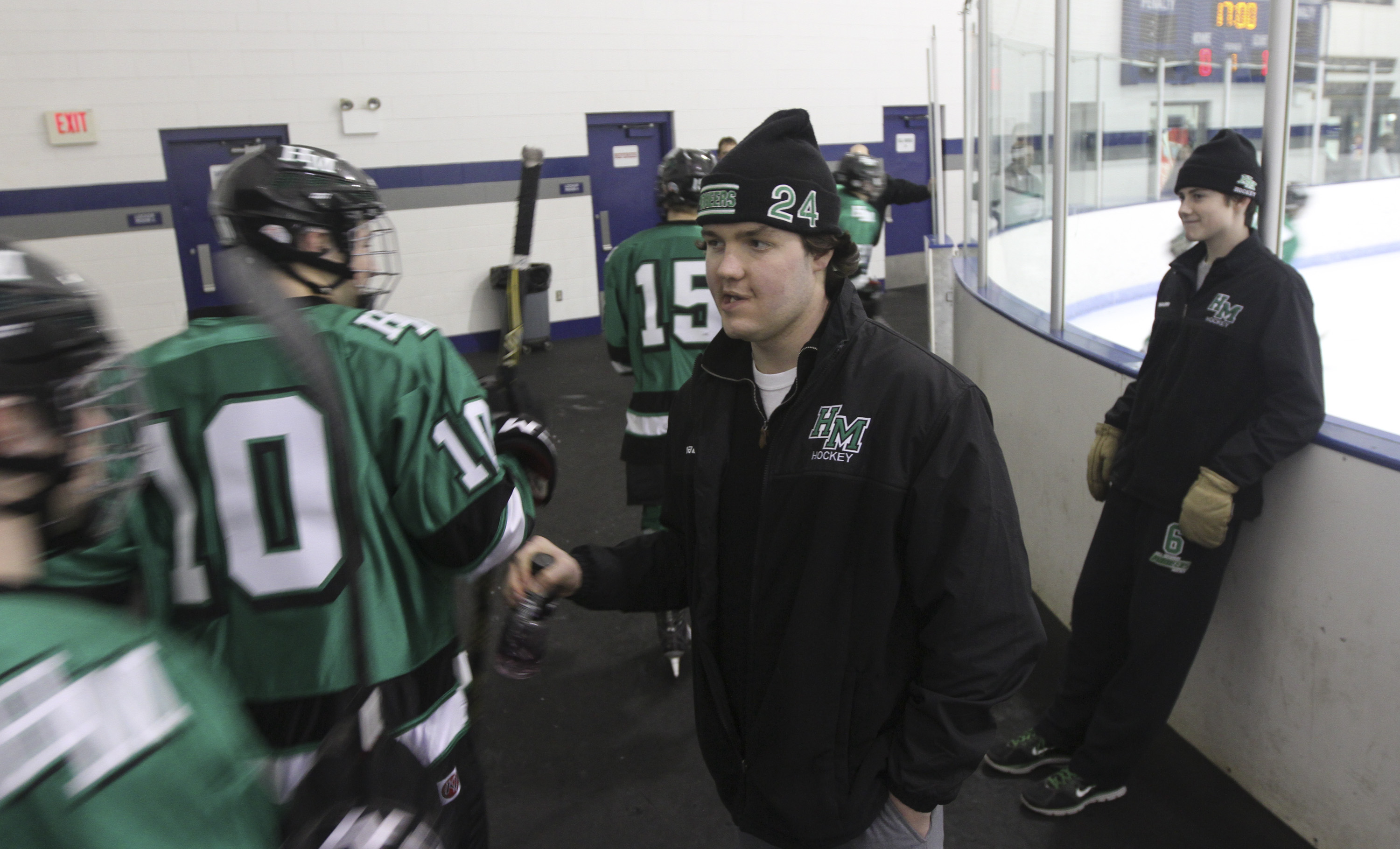 Duke Pieper, one of the team manager's for Hill-Murray's hockey team, greeted players as they hit the ice to take on Tartan in Oakdale. Kyndell Harkness, Star Tribune

Facing a brain surgery that 95 percent of patients do not survive, then-15-year-old Duke Pieper posed three heavy questions to his father.

"He asked me, 'How long does it take to die? Does it hurt to die? How do you know when you're dead?'" Mark Pieper said.

Only two days before, the freshman had cracked the 2008-09 starting lineup for defending boys' hockey state champion Hill-Murray. The young defenseman from Edina seemed poised for success, with colleges already starting to inquire about him.

He hit the ice for warm-ups at the season opener in Burnsville but complained of a headache and seeing double. He never played a shift.

His hockey career was over. His battle for a normal life – for life, period – had just begun.

Suffering from a non-cancerous brain lesion that caused bleeding in the brain, Pieper survived that first surgery more than three years ago and five ensuing procedures on his brain or spine. He endured complications and infections and temporary paralysis. He had to re-learn basic skills such as swallowing, talking and walking.

He only recently wore a Pioneers jersey again on senior night. Under his jersey, a tube ran from his brain into his stomach to relieve fluid buildup. Just in case his diminished balance caused him to fall on the ice, he wore a helmet to protect the titanium plate that replaced part of his skull.

But if only for a few moments, he was a hockey player again. Nerve damage from the surgeries had paralyzed the left side of his face, but he still flashed a joyous smile.

"I was really happy just to be out there," Pieper said. "Nights like that are what you work for."

Other nights bring tears and questions: Why me? How will I get through another day? How normal can I hope to be?

He tries to answer those worries daily by assisting the hockey team and working overtime to graduate on time this spring.

"I've got to admit, I'm trying to do this stuff a little too fast," Pieper said. "I'll see in the end if it all pays off."

In a team meeting prior to last season, Pioneers coach Bill Lechner encouraged players to look at Pieper from the inside out and reminded them of his potential.

"If he could have stayed on the path, he'd be here right now," Lechner said.

An honorary captain of the Pioneers this season, Pieper helps out at some practices and attends games. His sharp sense of humor draws laughs from coaches and teammates, but sadness remains.

"I think about the what-ifs all the time because he was projected to be a great player," Pioneers co-captain Charlie Sampair said. "But he's still the nicest kid I know."

Pieper deeply misses hockey and going to the rink remains a struggle. Early on, he couldn't bring himself to watch his teammates or his younger sister, Jackie, a sophomore skater at Benilde-St. Margaret's.

"There's a little bit of a healing quality being around but it always leaves you a little bit empty," Pieper said.

Hill-Murray, the top seed in Section 4, tangles with Stillwater in a section playoff semifinal game Wednesday night at the State Fair Coliseum. It's the time of year hockey players live for. But Pieper's longing for hockey knows no calendar.

"It's not just this time of year," he said. "Every single game you want to be a part of it."

Pushing to graduate with his class, Pieper gets up at 3 a.m. to put antibiotics in a temporary port in his arm. Then it's a one-hour, 30-mile ride across the metro to Hill-Murray, a private school in Maplewood.

He takes a full class load plus online courses and works with tutors. Limitations make the work more daunting. He still sees double. His handwriting is labored and not often legible. Classmates get extra credit for providing him lecture notes.

If his challenges are great, his determination is greater. The same fight that pushed him to play for the defending state champions remains.

"He has so much confidence in himself, even now," said his mother, Elizabeth. "You'd think some of that would change but it's just like before."

Those two young men remain one in the same.

"I still have the same qualities within myself," he said. "I wouldn't say I lost any of those. I would say I've broadened them. One of my greatest qualities is whatever challenge I have to face, I find a way to overcome it."