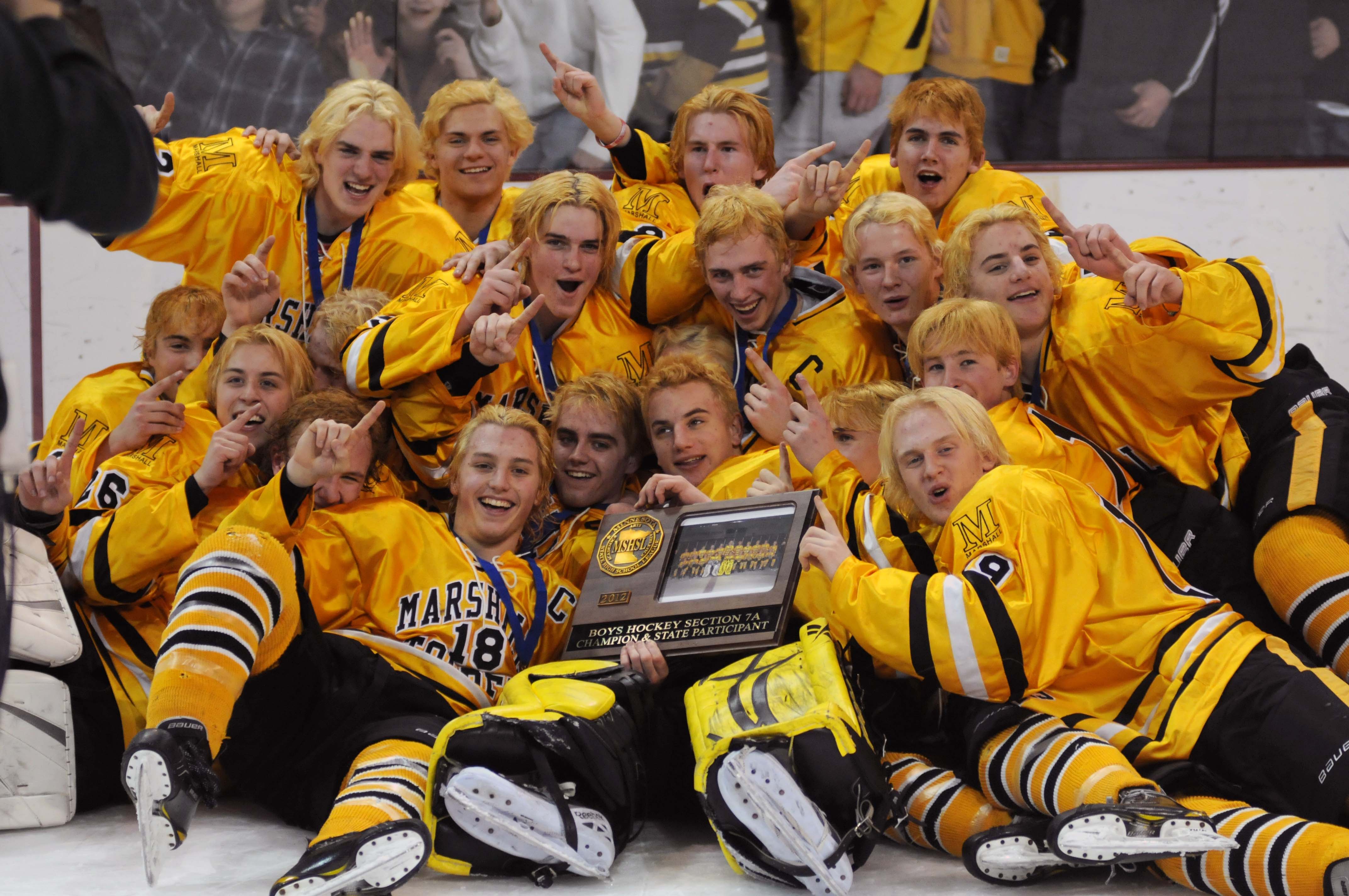 The Duluth Marshall Hilltoppers are the 2012 Section 7A champions. Photos by Jordan Doffing; OTSN

Duluth Marshall coach Brendan Flaherty and his staff knew they had a tough decision to make prior to the Hilltoppers’ 7A final game against Hibbing on Saturday, March 3.

The Toppers could either go with junior goalie Caden Flaherty, who had played every game in the postseason, or senior Christian Coffman, who was just coming back after fighting with mono over the past month.

“We decided to go with the senior, and the kid that had the better statistics throughout the year,” coach Flaherty said. “We felt that he was healthy enough, and that was the key.”

Coffman showed no ill effects of his sickness, stopped 31 shots and led his Toppers to their first Class 1A state tournament berth since 2008 with a 2-1 win over the Blue Jackets.

He didn’t have a flashy game, making only a handful of really spectacular saves, but that’s because he was square to the puck and confident in his crease all night. Coffman’s rebounds were directed to the proper spots, and anything around his glove or body was held onto.

The game was originally scheduled to be played on Wednesday, Feb. 29, but a blizzard forced a postponement.

Since Coffman had only been cleared to play last Friday, pushing the game back to allow for additional recovery might have been a hidden blessing.

“Everyone was scared and wanting me back, and we got the good news that I’d be able to play on Monday,” Coffman said. “I knew I was ready to come back and help the boys out.”

The help from Coffman gave Duluth Marshall the opening to take advantage of the few opportunities it had, and a pair of rebound goals proved to be the difference.

Senior Steve Long scored early in the game, and then sophomore Cameron McClure scored the game-winner just a minute and change into the third period.

After a brief on-ice celebration with the 7A trophy, Coffman began to realize that he was going to be skating on the ice at the Xcel Energy Center next week, something he says hasn’t sunk in yet.

“I was quite nervous coming in, and I had dreams about going to the tourney,” said Coffman. “Now that it’s over, it’s the best feeling in the world.”

Duluth Marshall will learn its quarterfinal opponent following a seeding meeting tonight. The Toppers will open play in the Class 1A tournament on Wednesday. 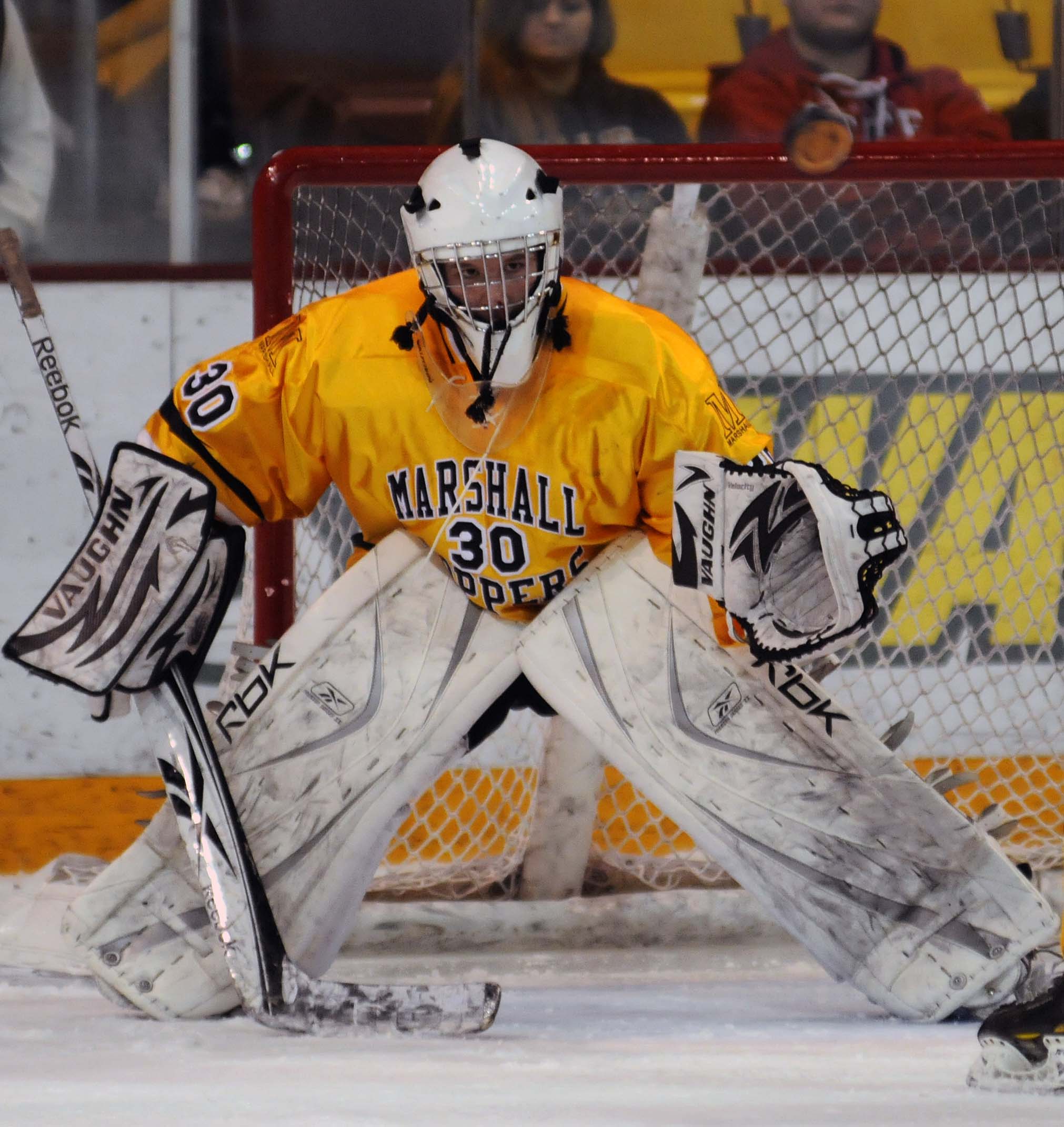 Christian Coffman was stellar in net stopping 31 of 32 shots faced. 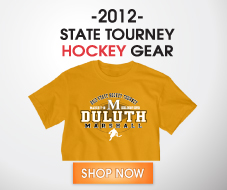 Cameron McClure batted home a rebound for the eventual game-winning goal just 1 minute, 39 seconds into the third period to give top-seeded Duluth Marshall a 2-1 win over No. 2-seed Hibbing in the Section 7A championship game on Saturday, March 3, at Amsoil Arena in Duluth.

After teammate Luke Pavelich threaded a pass through legs from the corner, McClure fired a low shot off the pads of Hibbing goalie Tyler Carlson. The puck squirted right back onto McClure’s stick, and he knocked it home to give the Hilltoppers the 2-1 lead.

Steve Long scored the first goal for Duluth Marshall, floating a rebound past Carlson just 2 minutes, 20 seconds into the game.

Once Hibbing found its legs, the Jackets pressured for the tying goal, finally finding a way to crack Christian Coffman 4 minutes, 11 seconds into the middle frame.

Junior forward Adam Johnson picked up a loose puck at the far blue line, wheeled through center and put a low, hard wrister on net. Coffman couldn’t control the rebound, and Eric Riihinen was able to muscle through a Toppers defenseman and tie the score.

From there, it was the Coffman show.

Coffman, who was playing just days after being cleared by doctors following a battle with mono, shut the door on every Hibbing attempt late, finishing with 31 saves.

Johnson and Mike Pechovnik had the assists on the Riihinen goal, and Carlson turned away 30 of 32 shots.

The Toppers will open the Class 1A tournament this Wednesday in St. Paul.

1. Christian Coffman, Duluth Marshall
Coffman was the difference for the Hilltoppers tonight, especially since they didn’t look to have their best against Hibbing. Not only did he make the great saves, but he also controlled the game and kept the puck out of dangerous areas.

2. Tyler Carlson, Hibbing
Not to be outdone was Carlson, who did everything in his power to give Hibbing a chance to push for overtime in the final minutes. Much like Coffman, Carlson was able to hold on to pucks, direct many shots to safe spots in the zone and frustrate the opposition with steady play between the pipes.

3. Adam Johnson, Hibbing
It seemed like Johnson didn’t leave the ice all night, but he somehow managed to keep his wheels late in the game. He didn’t score, but he did have an assist and made the play on the Jackets’ goal. Simply put, Johnson was the best player on the ice today not wearing goalie pads. 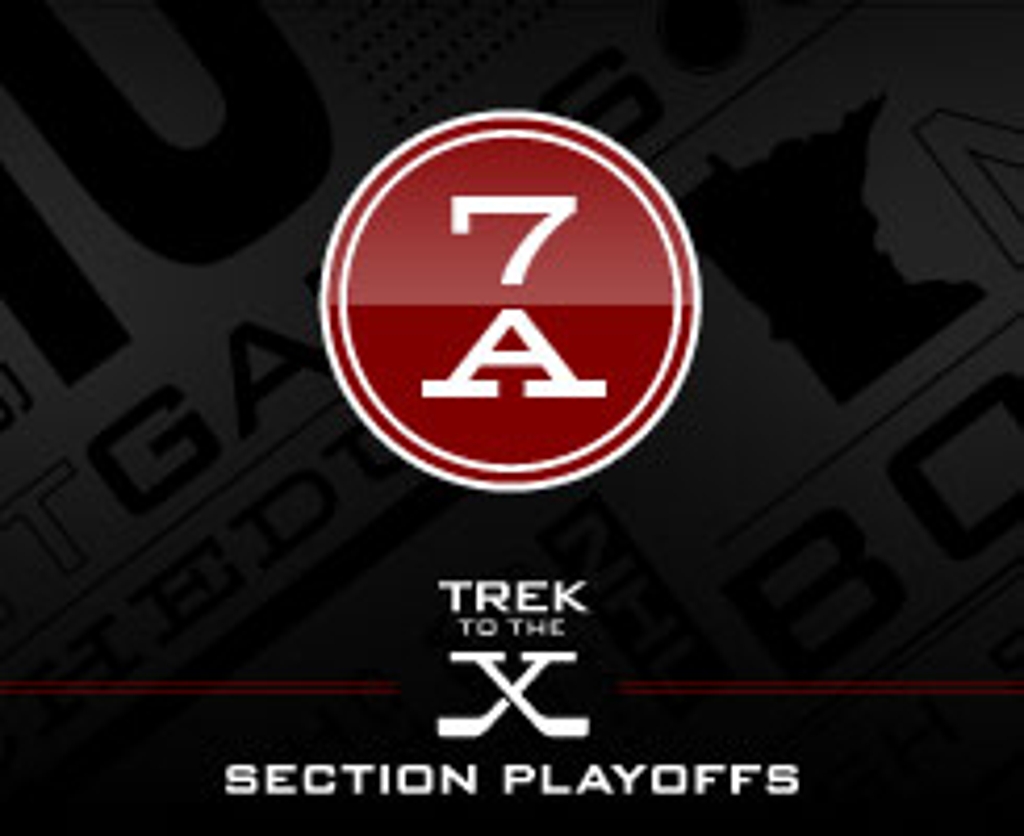 Tag(s): Hibbing/Chisholm  Duluth Marshall  Trek to the X  Class A  Section 7A