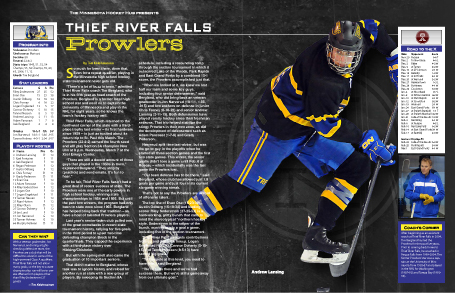 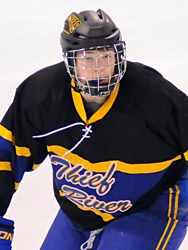 So much for been there, done that.

Even for a repeat qualifier, playing in the Minnesota high school hockey
state tournament never gets old.

“There’s a lot of buzz in town,” admitted Thief River Falls coach Tim Bergland, who is in his fifth year as head coach of the Prowlers.

Bergland is a former local high school star and went on to captain the University of Minnesota and play in the NHL for eight years, so he knows the town’s hockey history well.

Thief River Falls, which returned to the northwest corner of the state with a third-place trophy last winter – its first hardware since 1959 -- is just as excited about its return trip to St. Paul this March.

The Prowlers (22-4-2) earned the fourth seed and will play Section 3A champion New Ulm at 8 p.m. on Wednesday, March 7 at the Xcel Energy Center.

“There are still a decent amount of those guys that played in the 1950s in town,” explained Bergland. “They stop by (practice) and send emails. It’s fun to hear.”

To be fair, Thief River Falls hasn’t had a great deal of recent success at state. The Prowlers were one of the early powers in high school hockey, winning state championships in 1954 and 1956. But until the past two winters, the program had only been to state once since 1965.

Bergland has helped bring back that tradition - as have a host of talented Prowlers players.

Last year’s senior-laden club pulled one of the great comebacks in recent state tournament history, rallying for five goals in the third period to upset two-time defending champion Breck in the quarterfinals. They capped the experience with a third-place victory over Hibbing/Chisholm.

But with the spring melt also came the graduation of 10 important seniors. That didn’t matter to Bergland, whose task was to ignore history and reload for another run at state with a new group of players.

By sweeping its Section 8A schedule, including a resounding romp through the section tournament in which it outscored Lake of the Woods, Park Rapids and East Grand Forks by a combined 15-1 score, the Prowlers accomplished just that.

“When we looked at it, we knew we lost half our team and some key guys, including four senior defensemen,” said Bergland, who did bring back an veteran goaltender in Jon Narverud (18-1-1, 1.66, .915) and two anchors on defense in junior Chris Forney (6-16--22) and senior Andrew Lansing (2-11--13). Both defensemen have played varsity hockey since their freshman seasons. That trio helped stabilize the stingy Prowlers in their own zone, as did the development of defensemen such as Adam Pancoast (1-7--8) and Grady Pederson.

Narverud split time last winter, but was the go-to guy in the playoffs when he started all three section games and the first two state games. This winter, the senior goalie didn’t lose a game until Feb. 6 at Roseau – which incidentally was the last game the Prowlers lost.

“Our team defense has to be there,” said Bergland, whose club has allowed just 1.8 goals per game and just four in its current six-game winning streak.

That’s not to say the Prowlers are devoid of offensive talent.

Soderstrom is the sniper of the bunch, scoring nearly a goal a game, including five in the section tournament.

“To compete at this level, you need to have that,” said Bergland. “We’ve been there and we’ve had success there. But we’re still a game away from our ultimate goal.”

With veteran goaltender Jon Narverud, anchoring a tight-checking defensive team, the Prowlers are a club that will be difficult to solve for some of the high-powered Class A qualifiers. Thief River Falls will not allow many goals, so the key to a state championship run will be to create offense from players other than Riley Soderstrom (27 goals).

After beginning as an assistant coach at Thief River Falls in 2004, Tim Bergland has led the Prowlers for the past five years. Prior to coming back home to Thief River Falls, he coached in Fergus Falls from 1999-2004. The former Prowlers’ star was a captain at the University of Minnesota from 1983-87 and played in the NHL for Washington (1987-92) and Tampa Bay (1992-95).

Class 2A, 1A Brackets 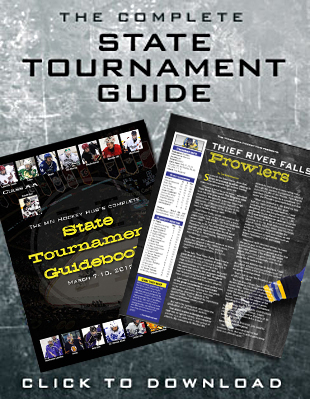