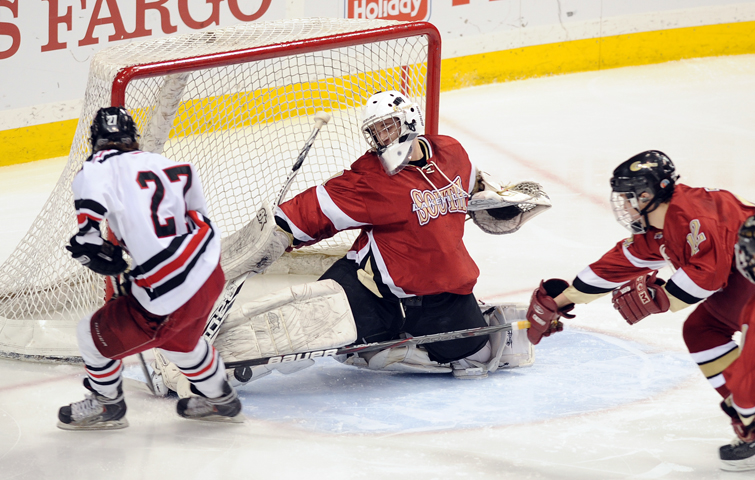 Unseeded and given virtually no chance at advancing by the "experts," Lakeville South (21-8-0) shocked top-seeded and No. 1-ranked Duluth East (27-2-0) with a 3-2 victory in the Class 2A quarterfinals Thursday, March 8, at the Xcel Energy Center in St. Paul.

“This is what you dream about when you play on the pond when you’re younger,” said Lakeville South’s Mr. Hockey finalist Justin Kloos, who sealed the victory with an empty-net goal and added an assist, his state-best 100th and 101st points of the season. “This is the one reason I chose to play high school hockey.”

In 2007, Grand Rapids upset top-seeded Edina in a mirror-image tournament that saw three of the top four seeds lose (including No. 3 Hill-Murray and No. 4 Blaine). Two years later, No. 1 Edina again lost in the quarterfinals, this time to a scrappy Moorhead team.

Prior to seeding, in 1995, an unbeaten Bloomington Jefferson squad featuring future NHLers Mark Parrish, Ben Clymer and Toby Peterson was upset by Duluth East in the quarterfinals. In 1977 and 1978, Roseau teams led by the Broten brothers and Butsy Erickson came to state unbeaten but were stopped by Edina East both winters, in the quarterfinals in 1977 and semifinals in 1978.

The discussion could go on and on as to powerhouse teams who fell shy of their state title dreams. But Lakeville South wanted to focus on the here and now.

“To take somebody down on the big stage is huge,” Lakeville South coach Kurt Weber beamed. “I think people saw what these kids are capable of.”

When the final horn sounded, two of the players most responsible for the victory embraced in the Cougars’ defensive zone. Defenseman and captain Joe Freemark jumped into the arms of junior goaltender Tyler Schumacher – quickly followed by the rest of the celebrating Cougars.

“For three periods, we never got going,” Duluth East coach Mike Randolph said. “It was an uncharacteristic game for us, but they had a lot to do with it.”

“They bottled us up all night,” East senior Dom Toninato agreed, his voice cracking.

South, which had been riding its offense on the capable shoulders of Kloos and sniper Alex Harvey all season, intead used a stifling defensive effort against the high-powered ‘Hounds. Schumacher stopped 25 of 27 shots, but most were from outside prime scoring territory, as the Cougars’ defense didn’t allow East to set up in the offensive zone.

“Tonight, I just felt the puck was like a beach ball,” Schumacher grinned during the press conference. “I felt so good. This was one of the greatest moments ever.”

To his immediate right, Freemark clapped and laughed.

They had good reason to be excited. Schumacher admitted to looking at the hockey fan message boards, many of which were flooded with comments about how the Cougars didn’t deserve to be at the tournament and how they had no chance.

“This tournament is upset city,” Schumacher said, shrugging as if it was the most normal thing in the world. “We have one more game and then we could be playing for the state championship.”

Mike Randolph, coach of top-ranked and No. 1 seed Duluth East, found himself asking, “Who are these guys?” as his Greyhounds struggled to find their game in Thursday’s Class 2A state tournament quarterfinals.

A 3-2 Cougars’ victory makes the Greyhounds the first No. 1 seed to fall in the quarterfinals since Moorhead downed No. 1 seed Edina in 2009.

“Playing the No. 1 team we obviously came jacked and ready,” Lakeville South defenseman Joe Freemark said. “We knew we had to play our best.”

A 1-0 Duluth East lead after the first period disappeared as Lakeville South scored three unanswered goals. Lakeville South skated out of the zone with purpose and disrupted the Greyhounds' offense in ways Randolph had not seen an opponent do this season.

The Greyhounds (27-2-0) rolled through a difficult schedule and weathered what Randolph called the most injury-plagued season in his 24 years at the helm.

They came to St. Paul looking to avenge a three-overtime loss to Eden Prairie in last season’s championship game. Lakeville South (21-8-0) returned to state after failing to score a goal in its two previous games in 2008.

The Cougars tied the game on a second-period rush. Alex Harvey passed to Justin Kloos, who slid the puck to Patrick Lauderdale for a goal at 8:36. Kloos picked up his 100th point this season on the play.

If tying the game was good for morale, taking a lead early in the third period convinced the Cougars the game was theirs to lose. John Wiitala took a pass from Justin Doeden, went to the net and scored just one minute and 34 seconds into the period.

Kloos added an empty-net goal that deflected off the stick of diving defenseman Meirs Moore.

Defense gets it done for Cougars 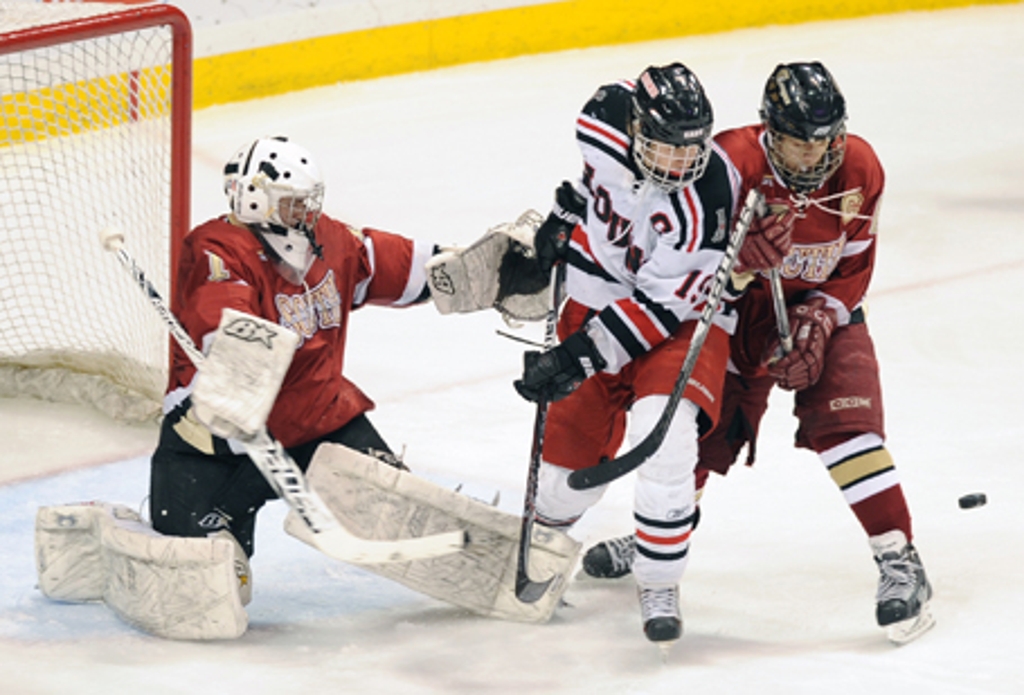 Duluth East averaged just over six goals per game during the regular season.

The one-loss Greyhounds had two Mr. Hockey finalists and four players with over 40 points on the season. Not to mention the No. 1-ranking in the state and the top seed in the state tournament.

The crushing weight of that Duluth East offense was placed squarely on the shoulders of senior defenseman Joe Freemark and his defensive corps.

Freemark and the Cougars had no big names to answer with, just big plays.

Lakeville South shut down the Greyhounds in a stunning 3-2 quarterfinals victory on Thursday, March 8. Although Duluth East scored a late goal, the defensemen --  and particularly Joe Freemark -- played an enormous part in keeping the Greyhounds out of the net.

“I dunno, I just played my game,” Freemark said after the game. “Again, the film really helped. I mean I knew what they were gonna do. I feel like I really used my feet well because I feel like I was faster than most of them and quicker.”

To prepare for such a tall task, Lakeville South coach Kurt Weber put in extra hours splicing up footage to help the Cougars anticipate what the Greyhounds would hit them with. In the week leading up to the tournament, the hours of breaking down video and studying the Duluth East attack left Lakeville South with a rock-solid game plan.

“We just cut the middle off ...” Weber said. “We just felt if they couldn’t go across they couldn’t get flow in the game, and it’s credit to my players they did exactly what I said.

“Our defenseman did an outstanding job, our kids executed to a T, and that’s what it takes to beat that team.”

Freemark and company received high praise from Duluth East coach Mike Randolph as well, who certainly noticed the impact they had on the game.

“They bottled us up all night,” Greyhounds forward Dom Toninato said.

Although he didn’t tally a point, Freemark was announced over the loudspeakers at the Xcel Energy Center in St. Paul as Lakeville South's Player of the Game. 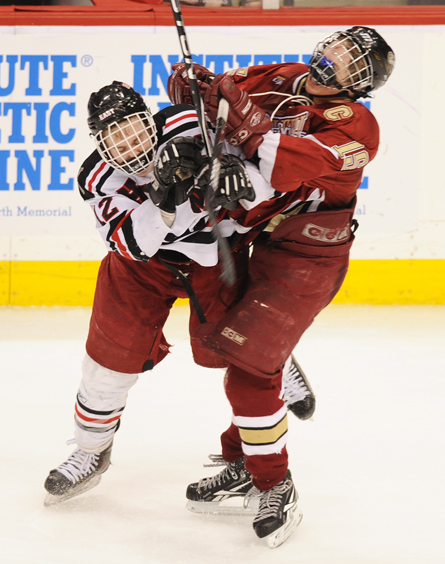 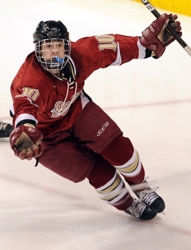 Lakeville South's John Wiitala (10) celebreates his goal early in the third period that gave the Cougars the lead for good. Photo by Helen Nelson.

Coming into the Class 2A tournament, Lakeville South sophomore forward John Wiitala registered eight goals on the season. He will be the first person to admit that he could have a lot more.

"So far this year I have had the most breakaways on the team," Wiitala said. "And I have been given a hard time for it."

His breakaway move, perhaps a patented move, has given his teammates and coaching staff the opportunity to provide the nickname "Gumby."

"You see him and he's just kind of rocking and rolling," Lakeville South coach Kurt Weber said. "He's had a lot of breakaways and hasn't scored and we told him he has to change his move, but after that we'll let him keep it."

"I've been called 'Gumby' with this move I have," Wiitala explained. "I have tried that move a million times in my driveway and on the pond and it finally worked."

When Wiitala got the puck in Duluth East's zone, he was all alone with goalie Dylan Parker. He made a quick move back to his forehand and slipped the shot by Parker's blocker to give Lakeville South a 2-1 lead early in the third.

For a moment he thought about going really fancy with a between-the-legs shot, but opted against it.

"We had some practices where I did it, but I just didn't want to do it here."

All was good when Wiitala put the Cougars up by a goal, but the only issue was another 15 minutes, 26 seconds of game time against top-seeded Duluth East.

"The clock couldn't go any slower," Wiitala said. "You look up and you see 14 minutes left and it just wouldn't move."

On top of scoring the goal that gave Lakeville South the lead, Wiitala has also put his name in the school's record books. Prior to the Cougars matchup with Duluth East, they have never scored a goal in the state tournament.

Wiitala is now the second Cougar to do so.

"We have never scored a goal in the state tournament, so to get one of the three we had, it feels pretty good," Wiitala said. "That is all I have to say."

Click here for more on Duluth East's heartbreaking loss to Lakeville South in the Class 2A quarterfinals.

No multiple overtimes this year. Heck, Duluth East wishes it had that chance.

The state Class 2A tournament’s top-seeded Greyhounds (27-2-0), defeated in triple overtime a year ago in the championship game, fell 3-2 to Lakeville South (21-8-0) in the quarterfinals on Thursday night at Xcel Energy Center in St. Paul.

An empty-net goal by state scoring leader Justin Kloos with under 40 seconds remaining held up as the game-winner after Duluth East popped in a goal with 9.5 seconds left.

John Wiitala’s goal 94 seconds into the third period broke a 1-1 tie for the Cougars, who got a goal midway through the second off the stick of Patrick Lauderdale to erase a 1-0 Duluth East lead.

That came 3:37 into the game when Trevor Olson tapped in a rebound off a shot by Jake Randolph.

Lakeville South’s victory marks the first by an unseeded team over the No. 1 team in the quarterfinals since Moorhead upended Edina in 2009.

1. John Wiitala, Lakeville South
With all eyes on Duluth East to respond to a tied game early in the third period, perhaps no one was paying any attention to the 155-pound Wiitala, a junior who found himself in alone on Hounds' goaltender Dylan Parker. WIth a nifty deke, Wiitala scored a highlight reel goal that propelled the Cougars into the lead and boosted Lakeville South's momentum. It was just the ninth goal of the season for Wiitala, who had been scoreless in his previous six games.

2. Charlie Heller, Lakeville South
In desperate neeed of a shutdown performance against one of the state's most explosive teams, Heller answered the call by keeping Duluth East's dangerous forwards from gathering any synergy in the Cougars' zone. The senior defenseman finished with three shots on goal and a plus-1 rating.
3. Justin Kloos, Lakeville South
In a showdown with fellow Mr. Hockey finalists Jake Randolph and Dom Toninato of Duluth East, the Kloos-factor proved to be a difference maker. Kloos assisted on Patrick Lauderdale's first-period goal with a brilliant cross-ice pass and scored an empty net goal, which would be the eventual game-winner. He bumped his state leading point total to 101 points.
-- Michael Murakami, MN Hockey Hub staff