Rematch is something special

Breck and St. Thomas Academy will meet again in Class 1A semifinals 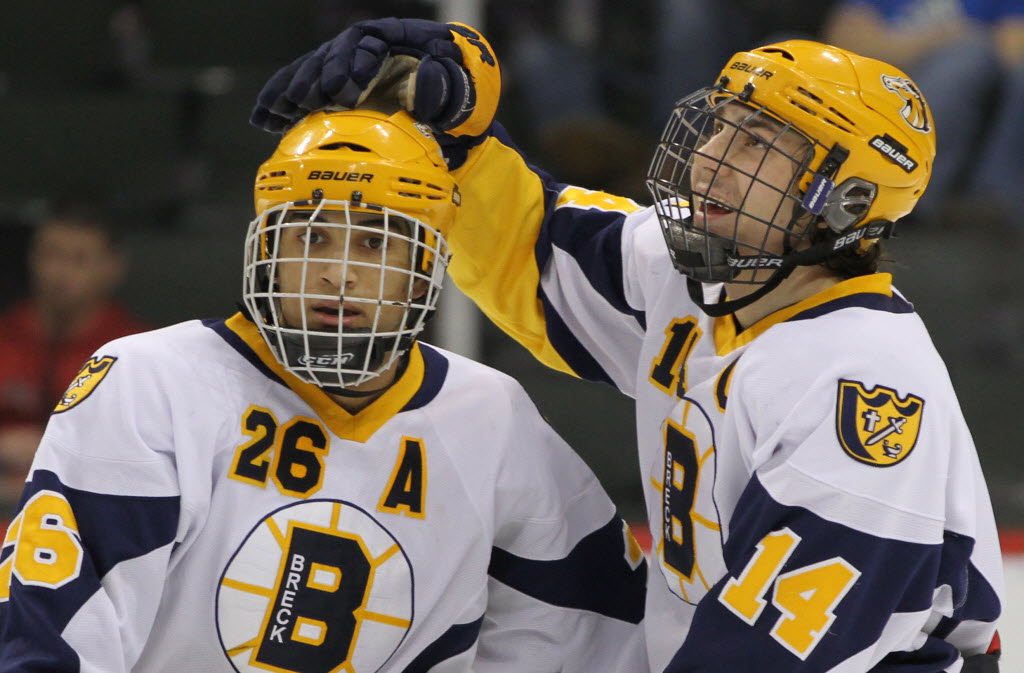 Superior play on special teams, hockey's game within the game, paid big dividends for St. Thomas Academy and Breck in their Class 1A quarterfinal games Wednesday.

The quarterfinal victories set up a rematch of a Jan. 21 game won 3-2 in overtime by St. Thomas Academy.

Little Falls coach Tony Couture hoped to see his team score an early goal against St. Thomas Academy and create some excitement and momentum. Instead, the No. 2 seed Cadets got a power-play goal from freshman Tom Novak just 38 seconds into the game.

"We got out there on that power play and we put one away early to set the tone for the whole game," senior forward Andrew Commers said.

The goals "really did help because we really didn't have a good first period," Cadets co-head coach Greg Vannelli said. "Special teams are where we actually took advantage of the period. Five-on-five we were a little tight, I think."

Duluth Marshall coach Brendan Flaherty directed his players to put the onus on Breck's defensemen to create plays. But several trips to the penalty box left the Hilltoppers reeling as Breck's forwards put pucks away.

Thomas Lindstrom and Conor Andrle each scored for the No. 3 seed Mustangs in the first period. Matt Colford's second-period goal made his team perfect on its first three power-play chances.

"Power plays are huge," Breck forward Grant Opperman said. "Coach [Larson] tells us that special teams are going to decide the close games, especially in the tourney. To get the first one is always big. When we're out there and we've got the advantage, we've got to capitalize on it if we want to win games. It was a big plus for us today."

Looking ahead to Friday's semifinal showdown against Breck, Vannelli said the pressure is on the Cadets' defense and goaltending to slow the Mustangs.

"We can't let them get loose and start rolling," Vannelli said.