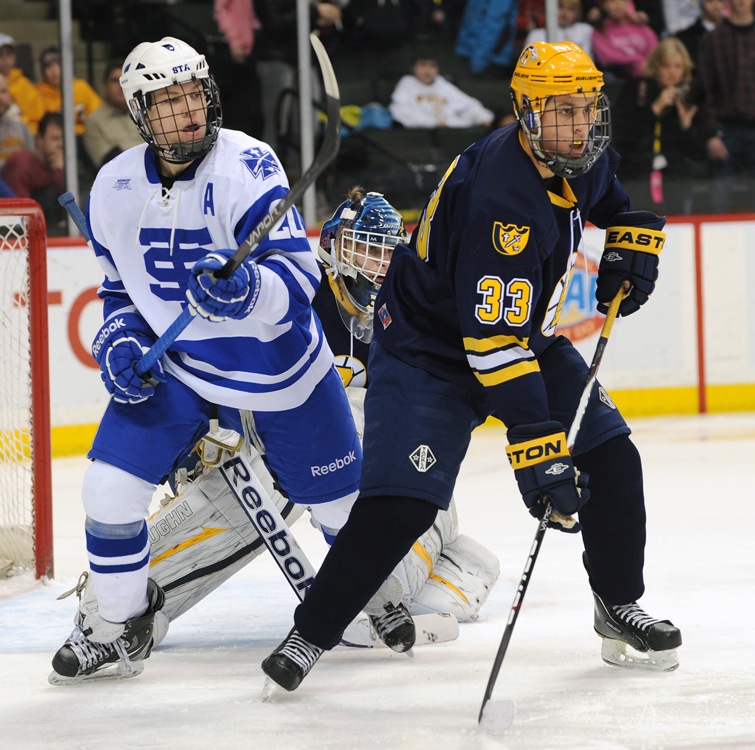 One goal for every seven shots. In a perfect world, that’s Les Larson’s mathematical hope for Breck’s boys’ hockey team.

“We played 51 minutes; I’m proud of our kids,” Larson said. “But you have to accept the result. They were just a little bit better than us.”

“They” as in defending Class 1A champion St. Thomas Academy, which advanced back to the small school title game with a 1-0 semifinal victory over the Mustangs on Friday afternoon at Xcel Energy Center.

Breck came into the game with 225 goals scored this season, more than any other team in the program’s distinguished hockey history. Breck hadn’t been shut out since an 8-0 drubbing by Class 2A Hill-Murray on Dec. 29, 2010.

None of the 25 shots put on STA goaltender David Zevnik Friday could solve the steel trap defensive system of the Cadets, who enter Saturday’s championship having not given up more than one goal in a game since Jan. 26.

Zevnik has stopped all 35 shots he’s faced in the state tournament.

“[The defense] does a great job of clearing guys out,” Zevnik said. “I was able to see all of the shots.”

The only goal came with just under three minutes to play in the second period after defenseman Tony Bretzman grabbed a Breck turnover in the neutral zone. He sped down the far wall and threaded a pass through two Mustangs to a waiting Peter Kreiger, who tapped in his 15th goal of the season.

After the teams combined to win their quarterfinal games 14-0 on Wednesday, neither coach – nor many watching – expected Kreiger’s goal to hold up as the only one.

“I thought there’d be six or seven goals,” Cadets coach Greg Vannelli said. “But the way it’s been going with us, our solid defense and goaltending, [the 1-0 game] doesn’t surprise me but I didn’t expect it.”

Breck missed out on a breakaway and hit two pipes in the third period.

Peter Krieger hadn’t been born yet when Croft and Seals opined, “We may never pass this way again.”

As the puck slid off the end of his stick to stymie a great scoring opportunity in a scoreless state Class 1A semifinal between the second-seeded Cadets and third-seeded Breck, Krieger lamented his lost goal.

“I was a little disappointed with that because I wasn’t able to bear down and get it,” said Krieger, who scored the only goal in the Cadets' 1-0 victory. “It happens where you get a bunch of chances in a game and you put them away.

And the way game was developing, it wasn’t obvious he’d get another. 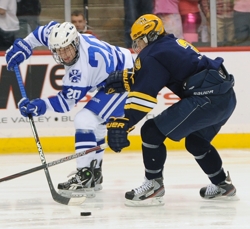 Not with the defensive battle being waged between the Cadets and Mustangs, who have combined to win the past four state titles in Class 1A. Described by both coaches as a defensive chess match, the two private school powers were scoreless deep into the second period.

Plug up the center of the ice.

Keep the puck to the outside.

Scoring chances were tougher to come by than current radio play of Croft and Seals. Space in prime scoring territory was just as rare. Until Krieger found himself presented with a second chance.

With just 2 minutes, 54 seconds left in the second period, Cadets’ defenseman Tony Bretzman jumped up into the play. He skated the puck into the right face off dot and fed it quickly toward the net. Krieger slipped into the low slot, avoiding Breck defender Derek Wittala just long enough to get a stick on the puck, redirecting it past Mustangs’ tender Jack Kenney.

There may have been a fraction of a second of space. But that was all Krieger needed to redeem himself.

“I try to put myself into position where I will get a second chance. If it presents itself, I’ll definitely take advantage of it,” smiled Krieger, who had been in a goal-scoring drought without a tally in the Cadets’ last six games. 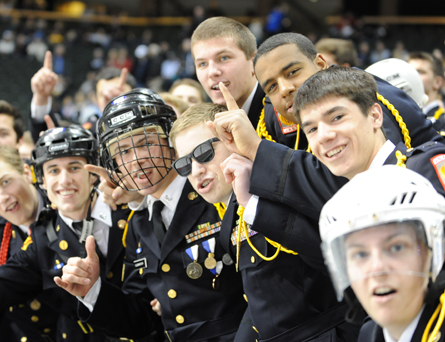 The St. Thomas Academy student section showed up in its formal -- and not so formal -- dress for the Cadets' 1-0 victory over Breck. Photo by Helen Nelson. 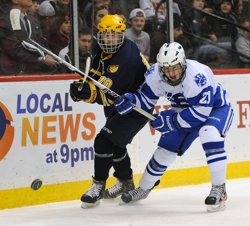 Pete Krieger (20) of St. Thomas Academy looks for room to operate during a tight-checking Class 1A semifinal against Breck. Photo by Helen Nelson.

Dressed in formal uniforms, the enormous gathering of students filled an entire section in the lower bowl at the Xcel Energy center, serving as a reminder of the tradition and discipline of the military school in Mendota Heights.

If the students looked the part in the stands, the Cadets played the part on the ice.

Cool, calm, and collected, St. Thomas Academy played mistake free hockey to down Breck 1-0 and move on to the state Class 1A championship game.

St. Thomas Academy co-head coach Greg Vannelli said after the game that the military aspect of the school makes his skaters easy to coach and quick to learn.

“Their regimen is like that at school where they’re accountable and have good time management,” Vannelli said. “They listen to their instructors so as coaches, it’s just a transference from school over there, they’re very good students of the game.”

Against Breck’s daunting offense, the Cadet’s displayed discipline by making sure they didn’t give the Mustangs extra opportunities by marching to the penalty box. Breck had just one power-play opportunity.

“Breck averages like seven and a half goals per game, and there’s a reason for that,” Vannelli said. “They have a lot of skill guys, and when they get a power play, then all the sudden (Breck coach Les Larson) gets to put guys off a couple lines together, then it’s tough, you just gotta hope for the best.”

Late in the third period, Breck was finally awarded a man-advantage when St. Thomas Academy forward Matt Perry was sent to the box for interference. It seemed like a fitting time for the Mustang’s offense to strike.

The Cadets had other plans, however.

“We actually have a pretty good percentage of killing penalties and with a really good goalie it makes you feel a little better,” Vanelli said. “Don’t sit in the box, we’re more of an aggressive penalty kill team because if you give them time, they’ll just destroy you.”

Back at full strength, St. Thomas Academy had no problem hopping right back into its defensive flow and clamping down for the remainder of the game.

“The guys played with a lot of composure,” Vannelli said.

One mistake one too many for Breck

Breck’s super skilled offense allows plenty of time for senior goalie Jack Kenney to scrutinize the game as it plays out in front of him.

He scans the flow. He studies the tendencies. He attempts to gain an edge.

Kenney thought he had just that against St. Thomas Academy in the Class 1A semifinals on Friday, March 9, at the Xcel Energy Center in St. Paul, specifically on its zone entry habits.

So when he saw the Cadets speed through center and into the Mustangs’ zone late in the second period, Kenney came to the top of his crease and prepped for what he though would be a shot off the rush.

“On the goal, I saw the guy drive wide and earlier they had driven wide and just cut in and take a shot. I anticipated that and I didn’t look for the player,” Kenney said. “I don’t know who it was coming through the center seam.” 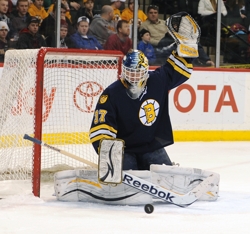 Breck goaltender Jack Kenney made 30 saves in the Mustangs' 1-0 loss St. Thomas Academy in the state Class 1A semifinal. Photo by Helen Nelson

That mystery player was Peter Krieger, who drove directly to the back post. When he got there, Tony Bretzman put a perfect cross-crease pass on his tape.

Krieger put it in the back of the net.

As it turns out, that was one too much.

“They blanked us,” coach Les Larson said after the 1-0 defeat at the hands of St. Thomas Academy. “They play good team defense. We coughed up the puck, and they took advantage of it the one time they got it.”

Because of the lights-out effort of the Cadets’ defense, Breck struggled to generate consistent offense. Even when it did start to get things clicking, penalties knocked the flow of the game off course.

And of course there were those famous missed opportunities.

With the victory, the defending champion Cadets move onto to Saturday’s title game at the Xcel Energy Center in St. Paul.

Tony Bretzman threaded a pass through two Breck defenders to Krieger in the slot, who deposited the puck past Breck goaltender Jack Kenney.

1. Peter Krieger, St. Thomas Academy
The senior forward missed on a prime scoring chance early, but he made no mistake on glorious opportunity No. 2 when he beat Breck goaltender Jack Kenney from close range with 2 minutes, 54 seconds left in the second period. The goal snapped a six-game drought for Krieger, who has 15 this season.

2. David Zevnik, St. Thomas Academy
The junior goaltender could be one of the most underrated goaltender in the state, as he owns a .920 save percentage and is allowing an average of 1.59 goals per game. Zevnik recorded his sixth shutout of the season making 29 saves in the process. Want more? Zevnik has registered a shutout in four of his last seven games and was flawless before stepping aside to allow senior goaltender Ian West finish out the Cadets' 7-0 state quarterfinal victory over Little Falls.

3. Jack Kenney, Breck
If the Mustangs had any concerns heading into the state tournament, it may have been some inconsistencies between the pipes. After all, Kenney had been replaced in the Section 2A final after surrendering five goals on 17 shots on goal by Blake. The senior goaltender bounced back nicely in the state tournament, especially with a 30-save performance in the semifinal loss to St. Thomas Academy, stopping several point-blank chances by the Cadets.