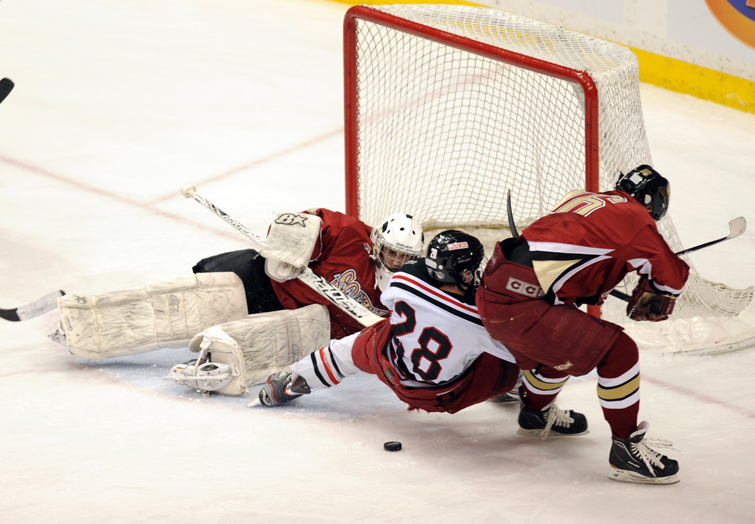 Jake Randolph paced out of the press conference room and started walking.
His jersey was still on.
Tears were pouring from his eyes.
His head was down.
After a few more steps, he reached a fork in the hallway, stopped suddenly and asked a simple question to a group of reporters near an elevator.
“Which way is it to the locker room?”
As it turns out, he had taken a wrong turn out of the press conference, unable to think straight or concentrate on anything but what had happened on the ice just minutes earlier.
The Duluth East captain had just gone through one of the harshest losses in his hockey career. His top-ranked Greyhounds had fallen to unseeded Lakeville South 3-2 in the Class 2A quarterfinals.
For the third year in a row, the incredible dream of hoisting Minnesota hockey’s ultimate hardware ended prematurely.
Heartbreak.
“[This is] one of the worst feelings knowing the team we had,” said an equally upset Dom Toninato, one of Randolph’s best friends and a Greyhounds co-captain. “We just didn’t get the job done. Like coach said, we just didn’t get to our game.”
Coach Mike Randolph – Jake’s father – talked about the ins and outs of the quarterfinal game, one where the Hounds simply never found theirs.
“It wasn’t our team,” the elder Randolph said. “I kept looking out there going, ‘who are these guys?’ You guys have seen us play… does that look like us?”
It didn’t, and coach Randolph could sense it early, despite a Trevor Olson goal to put the Hounds on top 1-0 just 3 minutes, 37 seconds in.
For the majority of the contest, Duluth East struggled to get into the offensive zone, and had an even tougher time setting things up if it did manage to get the puck low.
The result was something followers of the Greyhounds probably haven’t seen in a while – very little zone time.
“We’ve had shift, after shift, after shift in the offensive zone against good teams that look like we’re on the power play,” Randolph said. “Tonight we didn’t. I don’t remember too many shifts where we were in the offensive zone for any extended period of time.”
The power play, which had been clicking at nearly 50 percent for the season, generated chances, but failed to find the net.
Lakeville South jumped on the chance to beat the Greyhounds, scored three straight times and put the game away.
When the final horn blew, the little things turned out to be Duluth East’s demise.
A turnover here.
A missed chance there.
The Greyhounds simply couldn’t find their game.
For this group of seniors, which came back as a unit instead of jumping off the high school hockey ship for other hockey playing opportunities, it couldn’t be further from the ending they had in mind.
Even so, Coach Randolph was proud.
“These two guys to my right, two great kids, two kids who took this team on their backs and did a heck of a job,” Randolph said about his son and Toninato. “Two buddies, two friends that have been playing together since they were mites because they wanted to do something special this year.”
“But unfortunately, Lakeville South had something to say about it.” 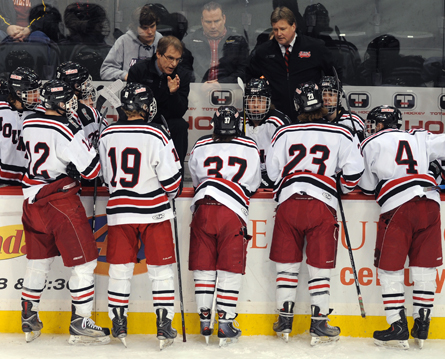 Duluth East coach Mike Randolph talks to his team during a timeout late in Thursday's game. Photo by Helen Nelson.