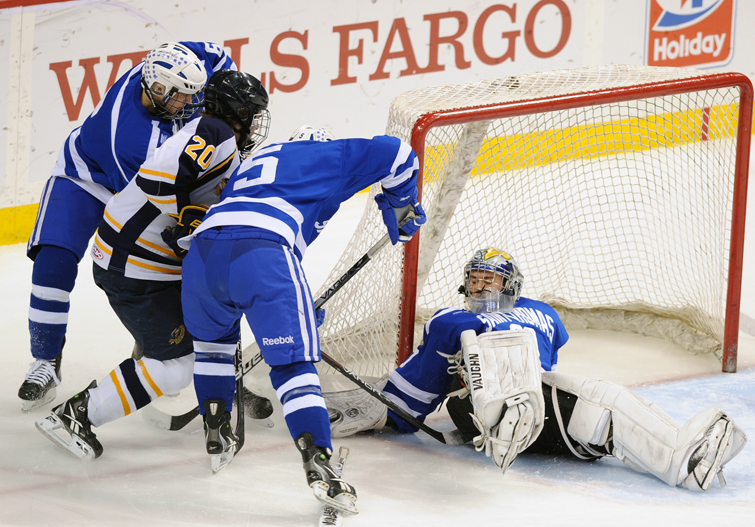 David Zevnik and the St. Thomas Academy Cadets claimed their second consecutive Class 1A title with a 5-1 victory over Hermantown. Zevnik, a junior, made 20 saves on 21 shots. Photo by Helen Nelson.

The start couldn’t have been more ominous for Hermantown.

And we’re not talking about the goal St. Thomas Academy’s Matt Perry scored less than 3 minutes into the Saturday, March 10, state Class 1A championship game at the Xcel Energy Center in St. Paul.

Or the goal Alex Johnson scored three minutes later to give the Cadets a two-goal lead. 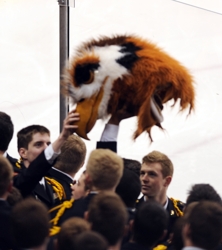 St. Thomas Academy's student section has some fun with the head to the Hermantown mascot's costume. Photo by Helen Nelson

Somehow, it seems, Hermantown’s mascot took a wrong turn. The cute and fluffy Hawk was in the midst of the Cadets’ rowdy student section just minutes before puck drop.

St. Thomas Academy is an all-boys school. Students show up to the game in their military uniforms. They are organized. They are loud. This is not a good place for a wayward Hawk to be.

Sure enough, it didn’t take long before the Hawk’s head had been ripped off and was bouncing, beach-ball style, through the section.

Count it as the first loss of the year for Hermantown, which entered the title game 30-0-0. Setback No. 2 came a few hours later in the form of a 5-1 St. Thomas Academy runaway victory, their second over the Hawks in the state title game in as many years.

The pregame hijinks, and the lopsided score, were about the only notable differences between this year and last, when St. Thomas Academy took advantage of its superior depth to grind away at the Hawks.

“Basically it seems like the same team,” Hermantown senior defenseman Jared Kolquist said after losing in the state championship game for the third straight year. “It seems like they just reloaded. Just as strong, if not stronger, than last year’s team.”

Johnson and Peter Krieger scored in a span of 11 seconds in the second period to put the Cadets (26-5-0) ahead 4-0, and St. Thomas Academy had built its lead to 5-0 before Kolquist ruined Cadets’ goaltender David Zevnik’s bid for a third straight shutout.

Johnson, who also had two assists, and Zevnik, who made 20 saves, are both juniors. Tom Novak, who joined Zevnik on the all-tournament team, is a freshman. The Cadets, who have won four state titles in the last seven years, could very well win another title next year, and the year after, and the year after …

“Your typical Class A teams will have a hard time,” Hermantown coach Bruce Plante said about the prospects of a public school winning a Class A title in the near – or distant, for that matter – future.

“It’s just gonna be hard for a normal town like ours, 8000 people, or any small school in southern Minnesota or anywhere. It’s just hard to come up with nine forwards, six defensemen and a goalie like that. We just don’t get the numbers to do that.” 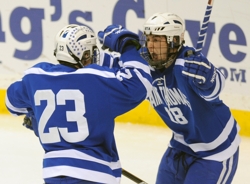 That’s less of a problem for St. Thomas Academy, which lost its top three goal scorers from last year’s team yet easily could have passed itself off as the same squad, albeit one with a more stingy defense.

“We can’t play Thomas’ line against everybody, so we had to put some other guys out there.”

“We felt like we could play with these guys’ second line,” Johnson said. “We knew that we could get a couple. We were confident.”

St. Thomas Academy co-head coach Greg Vannelli said the Cadets’ success can be traced more to the work of senior leaders such as Andrew Commers than an overabundance of highly skilled players.

“I hope we can have seniors step up next year and have the same thing,” Vannelli said about the prospects for a third straight title. “It’s tough, again this year we lose two guys on our top line, last year we lost three ... so you don't know how it’s going to turn out.”

That Hermantown, which Plante said had assembled its best group of defensemen in the program’s history, had no answer for the Cadets’ wave upon wave of forwards bodes well for St. Thomas Academy.

“We’re gonna lose a lot of guys from this years team,” Plante said. “We’re not gonna be able to do this again.” 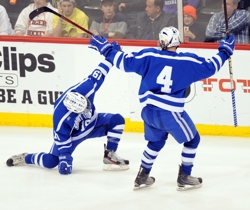 Alex Johnson (19) dips low for the celly on one of his two goals in the Class 1A state championship game, a 5-1 St. Thomas Academy victory. Photo by Helen Nelson.

Leaned on heavily as a scorer early in the Cadets’ season, Johnson disappeared at times as the year wore on.

Even in the state tournament, Johnson suffered from a separated shoulder and was held without a point in the first two games. Still, he battled back, and on the biggest stage, Johnson made his mark.

In scoring back-to-back goals for the Cadets’, Johnson beat Hermantown goaltender Matt Mensinger on clean shots, igniting the crowd and sealing the 5-1 victory for St. Thomas Academy at the Xcel Energy Center in St. Paul.

“Alex is a warrior, he’s a tough tough player,” St. Thomas Academy co-coach Greg Vannelli said after the game. “I knew that Alex had it in him. Before the game we were saying if that line could come through like they had in the past we’re gonna be sitting pretty good.”

Although Hermantown had a top line to match the Cadets’, Johnson’s group had enough talent to find holes in the Hawks’ defense. They left him alone and unpressured in many situations, and Johnson thrived.

Johnson’s weapon of choice against Mensinger was his shot. Instead of firing for the corners looking for a fancy snipe, Johnson set his sights low, scoring once on the ice and once just above Mensinger’s leg pads. It wasn’t just a fluke either, it’s a strategy that led him to a 21-goal season.

“To be honest, I always shoot low, I never shoot high,” Johnson said. “I feel like it has a higher percentage of going in. I mean, they’ve got gloves, they’ve got blockers, they’ve got all that.”

Johnson finished the night with two goals and two assists, his biggest single-game point total since December 26 against Holy Angels.

The fact that it was in the state championship only made it sweeter.

“It’s unbelievable,” Johnson said. “You just don’t know what to do.”

The Cadets' last line of defense 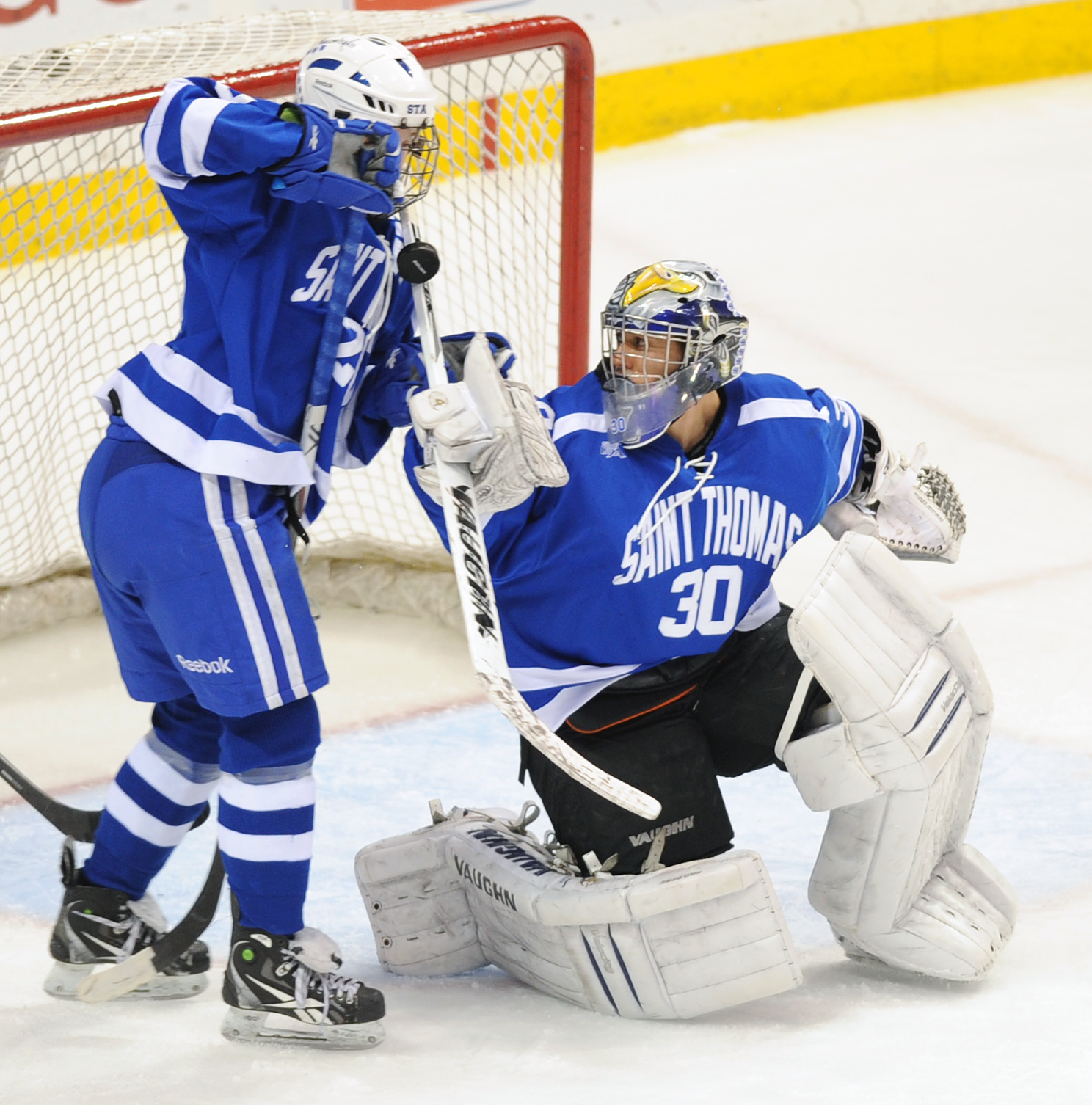 In the past 12 games, St. Thomas Academy goaltender David Zevnik has allowed 10 goals.

Five of those goals came in a lopsided loss to Hill-Murray on Thursday, Jan. 26, but since then Zevnik has been lights out -- not allowing more than a goal in any of the remaining 11 games.

“I tell you, goaltenders can make coaches look like geniuses,” St. Thomas Academy coach Greg Vannelli said.  “What a nice way to coach when you can have a player like that.

“It’s a coach’s dream to coach a game when you know you’re only going to give up one goal.”

Though that one goal that came on a 5-on-3 power play would end a 150:12 shutout streak for Zevnik, the Cadets’ junior wasn’t rattled finishing with 20 saves in St. Thomas Academy’s lopsided 5-1 victory over Hermantown.

“I try not to worry about goals I give up,” Zevnik said. “Just shake it off and move on. I know my teammates are behind me and we're going to continue to play good defense.”

Led by St. Thomas Academy senior captain and Mr. Hockey finalist Eric Schurhamer, the Cadets’ defense made things easier for Zevnik and the goaltender wasn’t afraid to credit his teammates.

“All the shots I'm seeing are from the perimeter usually,” Zevnik said. “They're clearing everyone out and I'm just controlling the rebounds.“

Despite his stellar performance in the state tournament, Zevnik admits he surrenders quite a few goals during the St. Thomas Academy practices.

“Coach calls me a game goalie,” Zevnik said. “I'm not really a practice goalie. In a game it's a whole different situation.”

With back-to-back Class 1A titles and possibly newfound confidence, Zevnik is already looking forward to his senior season.

Click here for a story on the unbeaten 2007 Hermantown state championship team and its thoughts on the efforts of this year's team.

Cadets win in a flash

Two firm sweeps of a hockey stick in the span of 11 seconds gave St. Thomas Academy what it needed to put away Hermantown again Saturday in the Class 1A championship at Xcel Energy Center.

If it was an attempt at reverse psychology, it came up short. The Hawks followed suit, losing a title-game rematch with the Cadets by a 5-1 score and taking second place for the third consecutive season.

The Cadets (26-5-0) jumped out to a 2-0 lead after one period on goals from Matt Perry and Alex Johnson. They pulled away in the second period with three goals, including ones from Johnson and Peter Krieger scored just 11 seconds apart. Austin Sattler added a goal later in the period.

Hermantown (30-1-0) converted on a 5-on-3 power play in the second period as Jared Kolquist’s slapshot beat Cadets goaltender David Zevnik. It was the only goal allowed by the Cadets’ defense in the tournament.

1. Alex Johnson, St. Thomas Academy
This is becoming a trend for the Cadets. Another junior -- Johnson, following Andrew Commers' title game outburst last year -- came up big in the Class 1A championship game with a pair of goals against Hermantown. After assisting on Matt Perry's goal early in the first, Johnson ripped in a the next two Cadets' goals to put the game out of reach. He later added another assist for a huge four-point night.

2. David Zevnik, St. Thomas Academy
While he only faced 21 shots because of the Cadets' terrific team defense, Zevnik was very solid with 20 saves. The junior goaltender has now won the last two Class 1A championship games, beating Hermantown both years. In this year's tournament, he allowed just one goal in three games.

3. Jared Kolquist, Hermantown
Part of a defensive corps tabbed by Bruce Plante as the best he's coached, Kolquist had a big tournament for the Hawks, including scoring the team's only goal in the championship game. The senior blasted a slapshot from the top of the left circle past Zevnik at 11 minutes, 34 seconds of the second period.

Joey Hanowski of Little Falls was named the Class 1A recipient of the Herb Brooks award following the conclusion of the state tournament Saturday, March 10 at the Xcel Energy Center in St. Paul.

According to the Herb Brooks Foundation, the award is "given to the Minnesota state hockey tournament player who most strongly represents the values, characteristics, and traits that defined Herb Brooks. This prestigious award commemorates the unending influence Herb had on hockey in Minnesota and throughout the world."

A senior forward, Hanowski led the Flyers this winter with 36 goals and 64 points, including an amazing 14 goals in Little Falls' six playoff games. The Flyers upended Rochester Lourdes 5-4 to win the Class 1A consolation title with Hanowski netting a hat trick. Described as a gritty and tough player, Hanowski is a leader on his squad.

Hanowski is the second Little Falls player in four years to win the award, following Riley Hirsch in 2009.