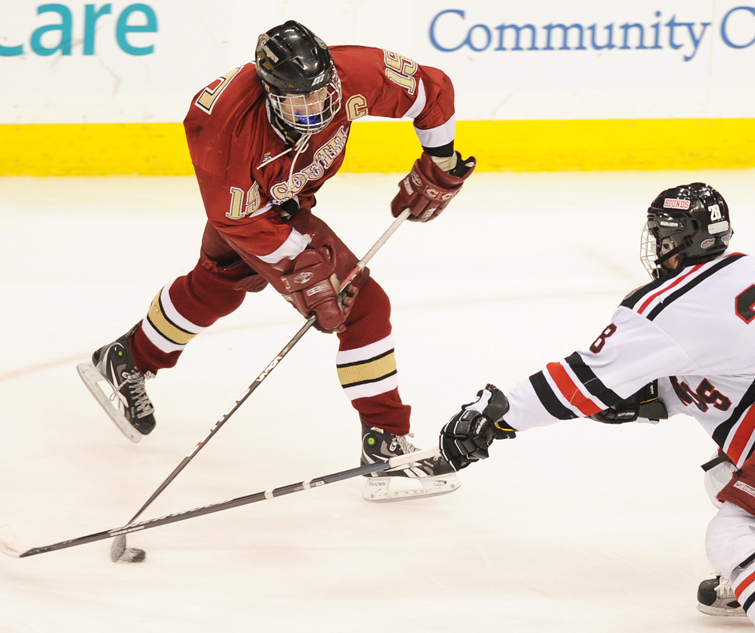 Mr. Hockey award winner Justin Kloos of Lakeville South scored a state-best 103 points this season and 238 for his career. Photo by Helen Nelson

Lakeville South’s Justin Kloos was named Mr. Hockey on Sunday, March 11, capping a terrific season in which he scored a state-best 103 points, the 10th highest total in state history.

Kloos, who has committed to play at the University of Minnesota, received the award given annually to the state's top senior skater in an awards ceremony held at the RiverCentre in St. Paul.

The honor came a day after Kloos, a 5-foot-9, 167-pound senior, closed his career by scoring the winning goal and notching an assist in the Cougars’ 2-1 victory over Moorhead in the state Class 2A third-place game at the Xcel Energy Center in St. Paul.

He also scored a goal and added an assist in the unseeded Lakeville South's stunning 3-2 triumph over No. 1 seeded and No. 1 ranked Duluth East in Thursday's quarterfinals.

Kloos scored at least one point in every game this season but one, the exception being Lakeville South's 10-1 loss to eventual state champion Benilde-St. Margaret's in Friday's semifinals.

He finished his career with 238 points to rank 19th on the all-time scoring list.

The other finalists for the award were Will Merchant of Eagan, Grant Opperman of Breck, Judd Peterson of Duluth Marshall, Jake Randolph of Duluth East, Charlie Sampair of Hill-Murray, Eric Schurhamer of St. Thomas Academy, Jared Thomas of Hermantown, Dom Toninato of Duluth East and Michael Zajac of Eagan.

Michael Bitzer of Moorhead won the Frank Brimsek award given to the state's top senior goaltender. Kyle Koop of Maple Grove was the other finalist.