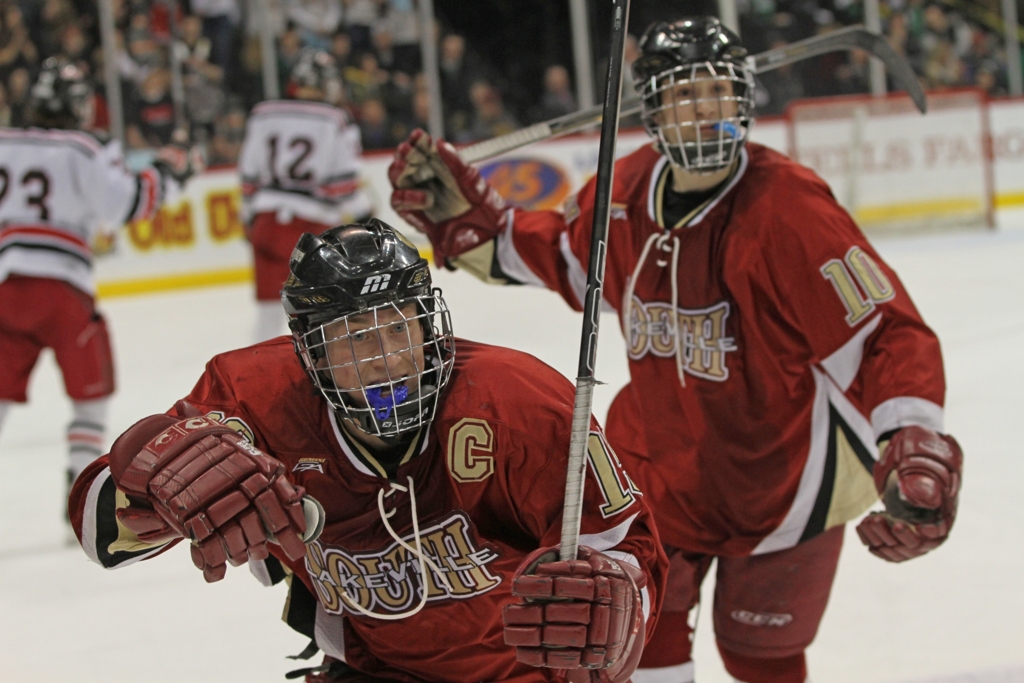 Lakeville South hockey standout Justin Kloos has taken classes to improve his public speaking. And just in time, he learned to put on his own necktie last week.

Looking sharp and feeling more poised at the podium served him well Sunday at the St. Paul RiverCentre. Kloos won the Mr. Hockey award, presented by the Minnesota Minute Men to the state's top senior skater.

The award is among several milestones he reached this season. He tallied one point every game and led the state in scoring with 103 points, the 10th-highest total in history. He also was named the Star Tribune's Metro Player of the Year.

"Both awards are so important for the community," Kloos said. "We want to build tradition at Lakeville South, and I hope the young kids see that and start to strive for some of the things that the seniors and I accomplished this year."

Erik Rasmussen, a former Mr. Hockey winner and NHL veteran, helped train the 5-9, 170-pounder in the offseason. "I couldn't be more proud of him," Rasmussen said. "It's well deserved."

"Look at the points he's put up being a marked man every night," Taylor said. "That says everything to me."

Michael Bitzer of Moorhead won the Frank Brimsek award given to the state's top senior goaltender. Kyle Koop of Maple Grove was the other finalist.

Besse's five goals, three of them shorthanded, set a state tournament record for scoring in a championship game. He eclipsed Eveleth's John Mayasich, who scored four times in the 1951 title game. Besse's Red Knights defeated Hill-Murray 5-1 for the program's first Class 2A title.

On Twitter in the hours after the game, the hashtag #besse was trending worldwide, meaning it ranked in the top 10 topics mentioned on the popular social-media site.

But Besse found his ego checked by none other than Jablonski.

"I heard about the trending stuff on Twitter, but then Jabs goes, 'Who was first?' " Besse said.

Jablonski drew global attention fueled by Twitter and Facebook after suffering a severe spinal cord injury in a junior varsity game in December. He was checked from behind into the boards, an action that triggered major changes to the penalty structure in Minnesota high school hockey designed to change the sport's culture.

Jablonski, who watched his teammates win the title from a suite in the Xcel Energy Center, smiled for team photographs in the locker room after the game. He also was given the state championship trophy to take home.

"There was a swarm of kids running at the bus and shaking it," Besse said. "You felt like a celebrity."