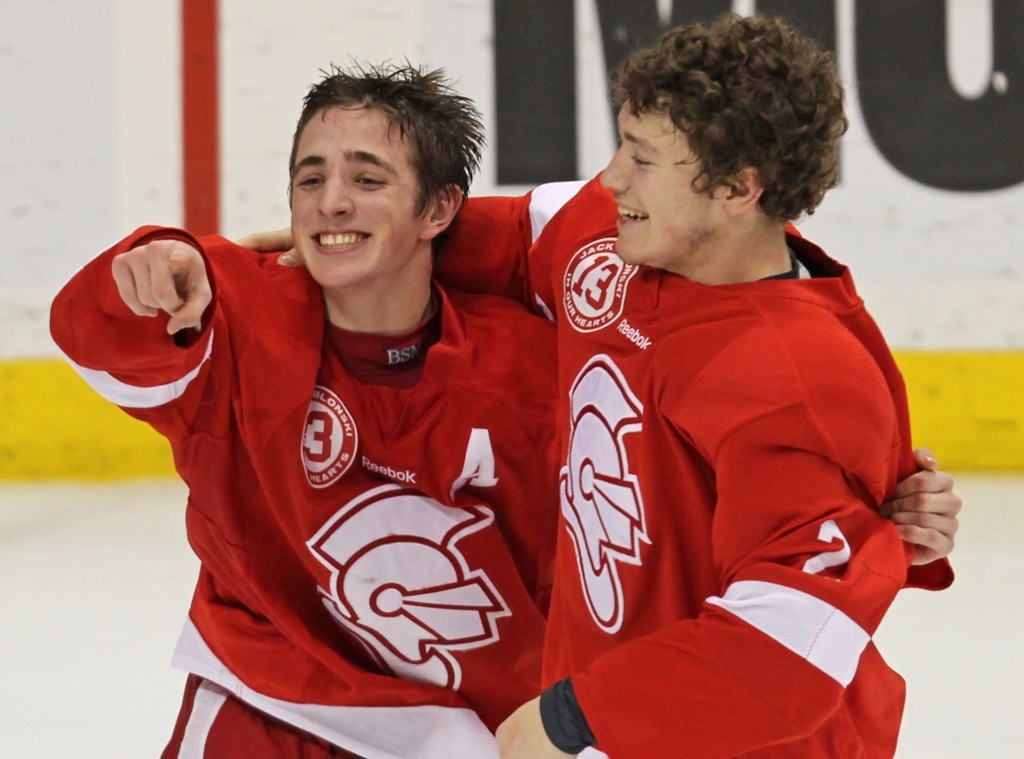 Grant Besse, left, and Chris Hickok celebrated after the Red Knights wrapped up the Class 2A boys' hockey championship.

As Jack Jablonski was being wheeled onto the ice, Grant Besse imitated every championship hockey celebration he'd ever seen, hoisting and kissing the trophy as he waved to empty stands.

It was a very different scene in the St. Louis Park Rec Center on Tuesday afternoon than the one witnessed by so many Minnesotans on Saturday night, when Benilde-St. Margaret's won the Class 2A boys' hockey championship.

At Xcel Energy Center, the stands were packed and Jablonski, who was paralyzed in a junior varsity game earlier this season, wasn't allowed on the ice by Minnesota State High School League officials. Tuesday, as the Red Knights gathered for a team picture that would include Jablonski, the atmosphere was far less formal.

Players skated and fought for pucks, and Besse recounted the story of a kid who became the first member of his family to play hockey and wound up scoring all five of his team's goals in the title game.

"When I went to Breck, I went over to one of my buddy's houses, and he got me started in hockey," Besse said. "He had all of the goalie equipment. I loved it. I wanted to start out as a goalie. My first game, I got lit up 9-0. That was my first and last game as a goalie."

High school goalies wish he would have stayed in net. Besse, a junior who has committed to Wisconsin, owns the Red Knights' scoring record and counted three shorthanded goals among the five he scored in Saturday's 5-1 victory over Hill-Murray.

Besse disproves the notion that hockey players must be handed a stick in the maternity ward and must skate in their own backyard every winter day, and his story demolishes the idea that talented young players must skip high school to thrive.

His parents didn't build a backyard rink. He started out righthanded before a youth coach recommended he learn a lefthanded shot. He plays baseball, enjoys his high school buddies and just culminated one of the most endearing stories in Minnesota high school sports history: how the Red Knights rallied around Jablonski and Besse scored like he was playing shinny.

"It's like being a celebrity," Besse said. "You've got all these people at school coming up and saying, 'Congratulations,' and everyone was telling me I was trending on Twitter.

"I got home late from the game that night with a bunch of buddies. After [Christian] Horn scored that goal against Edina (the game-winner with 24 seconds left in a 3-2 quarterfinal victory), he went on Facebook and had 200 friend requests from random people. After we won the state tournament, I went on Facebook and had about 1,000 requests, about four hours after that game."

"You look at my goals, and they had to do with everyone on the ice," he said. "On the second goal, when that guy gave me the puck right in the slot, Daniel Labosky was taking away the board-side pass and T.J. Moore was right in the middle. The guy didn't have anywhere else to go with the puck, so I wound up with it right in front of the net.

"The first shorthanded goal, I was back down low and Christian Horn blocked a shot and it went to the corner. As soon as I saw him going to the puck, I sprung loose. It all started with that unselfish play, him blocking a shot. Then 10 seconds into a five-minute major Jonah Johnson blocked one, and it popped right off his shin pad into no-man's land, and I was the first one there."

"He has calmness and composure combined with a little toughness," said his coach, Ken Pauly. "He has that swagger without being a jerk. That's the toughest thing in sports: How do you have that air about you without being a jerk? He knows how to handle it."

If you want proof, ask to be his friend on Facebook. Besse's still getting a kick out of that.

Jim Souhan can be heard Sundays from 10 a.m. to noon and weekdays at 2 p.m. on 1500-AM. His Twitter name is SouhanStrib. jsouhan@startribune.com