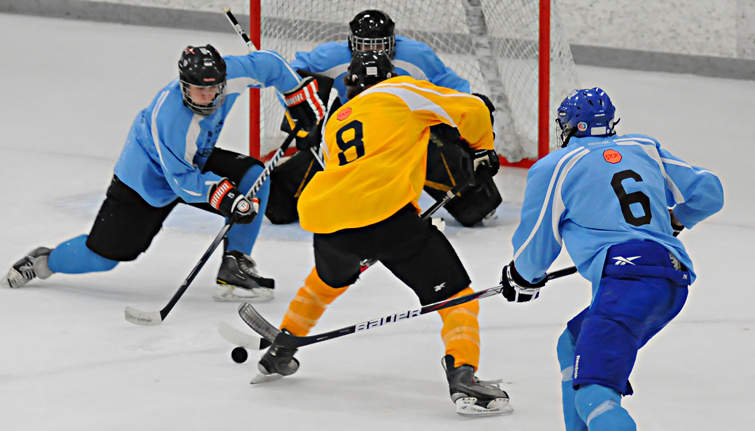 Jared Thomas (8) of Hermantown and the Minnesota Seniors streaks down on the Team Michigan net. Thomas and the Seniors were stopped by Michigan goaltender Devin Kero in a 5-2 loss Saturday night at the Plymouth Ice Center. Photos by Tim Kolehmainen.

This is all-star hockey, and all-star players typically don’t put a lot of effort into defense, much less sacrifice life and limb by diving in front of high-velocity pucks.

Yet there was Michigan player after Michigan player playing the role of human Zamboni. They blocked three shots during a span of 30 seconds and had to finish with close to double digits in a 5-2 victory of the Team Minnesota Seniors on Saturday, April 21, in the CCM Minnesota National Invitational Tournament.

“It helps a ton, obviously, when the guys are laying out for you,” said Michigan goaltender Devin Kero, who made 38 saves in the final round robin game of the event at the Plymouth Ice Center. “It makes you work that much harder when you see them laying everything on the line.”

“Minnesota,” said Kero, who is from Hancock, Mich., about Saturday’s victory over the defending tournament champs. “They are the greatest thing, the best out there, so we had to knock them off.”

It will be more of the same for Michigan on Sunday. Just the way Kero likes it.

“That will be great,” he said. “This one means a little more.”

Kero was credited with 10 saves in the third period, when the Minnesota Seniors controlled the puck for long stretches in the Michigan end. The goaltender got some help from the crossbar in the late going, when Brainerd’s Mitch McClain drilled a shot off the iron.

Minnesota Seniors speedster Charlie Sampair of Hill-Murray had one of the best chances in the second period when he blew past the Michigan defense for a breakaway, but Kero was there to get a pad on the low shot.

Kero certainly caught the attention of Minnesota Seniors coach Bruce Plante of Hermantown, who didn’t know the goaltenders’ name but certainly was impressed with his game.

“The puck wouldn’t go, that kid was tough, man,” Plante said. “He had 40 saves or something like that, so kudos to that kid.”

Plante said his team played the best that it had all weekend, “and you know we lose. It’s just unfortunate. We had a lot of chances, great chances.”

“It’s tough to get guys on a select team like this to do that, and when they do do it the rest of the team feeds off it,” Kygier said. “That’s really when we started to get the momentum.” 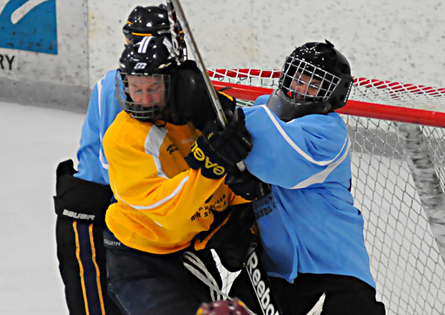 Michigan plays the Minnesota U-18s on Sunday at noon in the championship game. The Minnesota Seniors play North Dakota at 10:45 a.m. in the third-place game.

Kero, from Hancock, Mich., made 10 of his saves in the final period as the Minnesota Seniors, winners last year’s tournament, applied heavy pressure in the Michigan zone.

Michigan’s Thomas Ebbing and Derek Makimaa scored in the first period, as did Minnesota Seniors defenseman Brian LeBlanc on a blast from the point.

Ian Janco of Bloomington Jefferson scored in the second period for the Minnesota Seniors, also on a shot from the blue line.

Jon Narverud of Thief River Falls and John Scheuer of Cloquet split the goaltending duties. Narverud was the starter and made nine saves on 12 shots through the first period and a half. Scheuer made 14 saves on 15 shots.

1. Devin Kero, Michigan
The 6-foot, 160-pound goaltender from small-school Hancock in the Upper Peninsula made 38 saves in a rock-solid performance despite the steady jackhammering of the Minnesota Seniors.

3. Jared Thomas, Minnesota Seniors
The Hermantown standout and Minnesota-Duluth commit didn’t crack the scoresheet but he was effective creating scoring chances on the majority of his shifts. He played alongside Brainerd’s Mitch McLain and Matt Pohlkamp most of the game, and the trio formed one of Minnesota’s most potent lines.