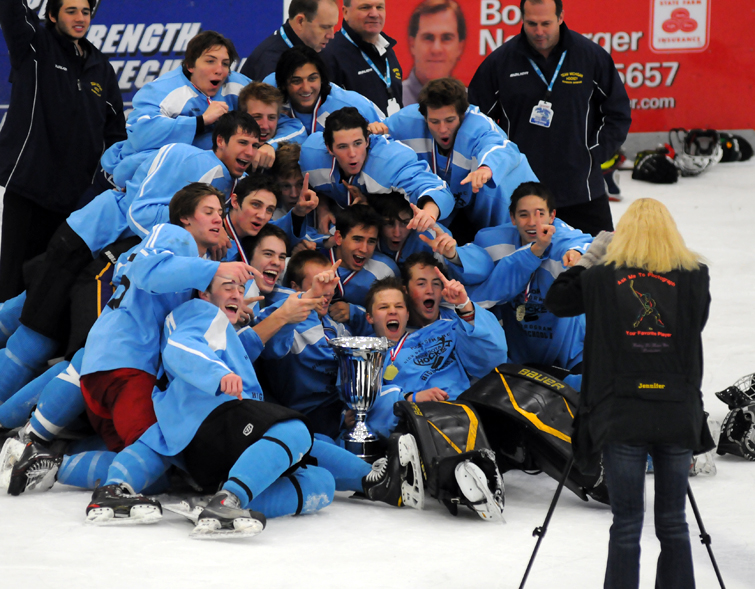 Team Michigan celebrates its title in the 2012 CCM National Invitational Tournament after a 6-4 victory over the Minnesota 18U Selects. Photo by Tim Kolehmainen.

The whooping and hooting and hollering continued long after the trophy was presented, medals were awarded and obligatory team photo – with high-polished hardware front and center – was taken.

Team Michigan was having fun. Loads of it.

“I just kind of apologized because we were overexuberant,” Michigan coach Todd Krygier said about his postgame chat with Minnesota U-18s coach Cory Laylin on Sunday, April 22, after Michigan’s 6-4 victory in the championship game of the CCM Minnesota National Invitational Tournament. “But that just goes to show how much respect we have for Minnesota high school hockey. And what a big deal it is for us to come here and win.”

Michigan’s title was its first in the tournament’s current incarnation. The event is a spinoff of what was formerly called the Chicago Showcase, a tournament that previously consisted of high school senior all-star teams from throughout the nation. 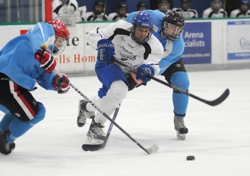 Minnesota 18U Selects' Will Peterson is pulled down on a scoring chance during the second period of the CCM National Invitational Tournament championship game. Photos by Tim Kolehmainen.

The Minnesota NIT, in its third year, spotlights some of the top seniors from five of the most hockey-focused states (Massachusetts, Michigan, Minnesota, North Dakota and Wisconsin) and includes an all-junior under-18 team from Minnesota.

“We had great chemistry from the start,” said Michigan forward Peter Halash, who scored three goals on Sunday. “At practices everyone was having fun. It was really a team effort here, no one was going out there trying to be an individual. That’s how we thrived out there.”

Michigan’s postgame “energy” was merely an extension of the team’s on-ice vigor. A commitment to backchecking and shotblocking served as the launching pad for numerous unselfish passing plays that led to highlight-reel goals.

“Oh, I’ve seen it before, that’s called competing,” Halash said when asked about Michigan’s abundance of blocked shots. “We’re out here working for our team, and we’re trying to get scouted by DI schools and junior programs, and that’s what they are looking for, kids who are going to block shots.”

Kids who can score goals are coveted, too. Michigan had two lines of scorers, with Halash, Derek Makimaa and Stefan Trentacosta involved in five of the six goals. Thomas Ebbing and Mackenzie MacEachern of Michigan big-school state champion Brother Rice were joined by Scott Cuthrell on another high-end forward line. Ebbing (Michigan State) and MacEachern (Bowling Green) have committed to Division I college programs.

“They are big, strong guys and they are year older than our kids,” Laylin said. “I was really impressed with their enthusiasm and their will to win.

“They played with so much pizzazz.” 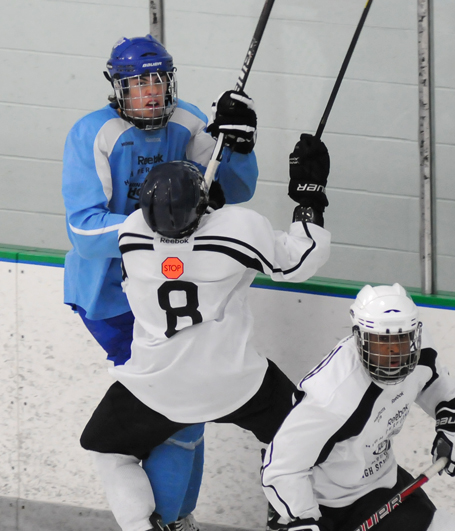 Benjamin Storm and Team Michigan played a physical game against Jake Guentzel (8) and the Minnesota 18U Select team in the championship game of the CCM National Invitational Tournament. Photos by Tim Kolehmainen.

Peter Halash scored three goals and added an assist, and Devin Kero made 30 saves as Michigan beat the Minnesota U-18s 6-4 in the championship game of the CCM Minnesota National Invitational Tournament on Sunday, April 22, at the Plymouth Ice Center.

Halash, who played for traditional powerhouse Detroit Catholic Central, scored midway through the second period to give Michigan a 5-2 lead.
Goals by Hans Gorowsky of Centennial in the second period and another from Tartan’s Jake Jackson midway through the third pulled the Minnesota U-18s to within 5-4.
But Halash, a 6-foot-2, 170-pound forward, fired a rising shot past U-18s goaltender Zach Thompson of Duluth Denfeld with 7:16 remaining to cap the scoring.
Thompson finished with 25 saves.
Gorowsky and Jackson each scored twice for the Minnesota U-18s.

1. Peter Halash, Michigan
The lanky forward fueled Michigan’s opportunistic offense by scoring three goals, including the game-clinching backbreaker in the third period after the Minnesota U-18s had rallied from a three-goal deficit to close to within one at 5-4.
2. Mackenzie MacEachern, Michigan
The 6-foot-3, 185-pound forward effectively used his combination of power and finesse to wreak havoc in the corners and in front of the net and twice set up teammates for highlight-reel goals.
3. Hans Gorowsky, Minnesota U-18s
The feisty forward from Centennial scored twice, and his second goal was a tough-angle beauty that rocketed in under the crossbar, providing a much-needed second-period spark.