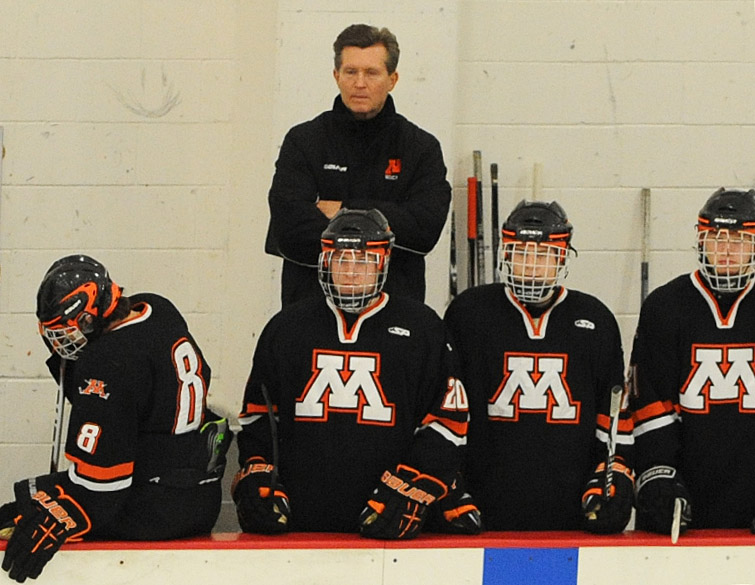 Dave Morinville guided Moorhead to a 275-107-30 record in 15 seasons. He announced his resignation on Sunday, April 29. Photo by Helen Nelson

Dave Morinville ticks away the milestones in his daughters’ lives – a wedding, another season completed with the University of Minnesota women’s club hockey team, a move to Amsterdam – and shares a simple and existence-shaking realization.
“Life goes by fast,” said Morinville, the former Moorhead coach who announced his resignation at the Sunday, April 29, team banquet.
Four years ago Morinville found a spot on the Moorhead varsity for Michael “Chance” Bitzer, a wide-eyed freshman goaltender oozing with potential. In March it was Bitzer, the pressure-hardened veteran who was named the state’s top senior goaltender, leading the Spuds past heavily favored Eagan in the first round of the state Class 2A tournament.
Four other Spuds seniors -- Terry Leabo, Jesse Doschadis, Bryant Christian and Logan Ness – were four-year members of the varsity.
The departure of the those five players, along with the seven other seniors on a Moorhead squad that finished fourth at the state tournament, spurred the resignation of Morinville, who guided the Spuds to 275 victories and four runner-up finishes at the state tournament in 15 seasons.
He said he had been considering retirement for the past several years.
“It just takes away your nights so much, and your weekends,” said Morinville, who works as a regional sales representative for Smith & Nephew, a medical technology business. “When you are with a high school program you have to be involved with your youth hockey program.”
Morinville, 58, was a goaltender for Moorhead High, graduating in 1972. He played at Concordia College before embarking on a coaching career that has included various roles at the high school, junior, college and professional levels.
Morinville guided Fargo North to two North Dakota state championships in the early 1980s, served as an assistant coach at St. Cloud State University, led the Omaha Lancers to a USHL playoff championship and was a scout in the Ottawa Senators organization.
Along the way, he worked with such hockey luminaries as Herb Brooks, Chuck Grillo and Mel Bridgman.
Morinville established himself as one of the state’s elite high school coaches at Moorhead, leading the Spuds to eight Section 8AA championships.
“In high school hockey, just to get (to the state tournament) is a blessing,” said Mike MacMillan, the former Buffalo coach who is the Executive Director of the Minnesota Hockey Coaches Association. “A lot of coaches would be thrilled just to reach a section championship. For him to get there and reach that level is pretty special.”
Morinville’s resignation follows that of athletic director Don Hulbert, who recently resigned after 23 years at Moorhead High. Morinville and Hulbert had worked together at Fargo North before joining forces in Moorhead.
All five of the coaches on Morinville’s staff last season were former Spuds players. Morinville said he isn’t sure how many, if any, in that group would apply for the head coaching position. Greg Salvevold, the head junior varsity coach and Moorhead’s head baseball coach, and varsity assistant Josh Arnold have the longest tenure coaching in the program.
Another former Moorhead player, Jon Ammerman, recently completed his first season as head coach at Windom.
“If I know Moorhead,” MacMillan said, “they will go out and get someone pretty high end.”
Morinville said he will help new athletic director Dean Haugo any way he can in the search for a new coach. Morinville said he will also be a regular in the stands at Spuds games, adding, “I’ve got a little orange in black in me.”
Although his coaching career is over for the foreseeable future, Morinville didn’t close the door on a possible return.
“I enjoy coaching,” “Morinville said. “It was a good time. Am I done? Who knows?”