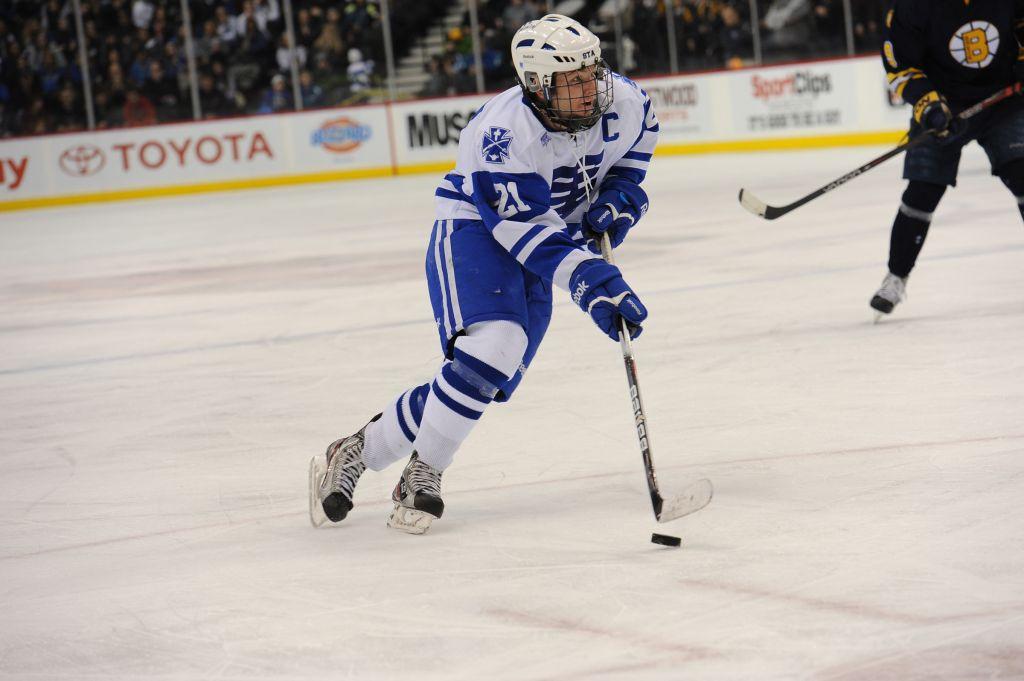 Andrew Commers, just graduated from St. Thomas Academy, has had to push hard to get a spot at RPI, and he doesn’t expect to let up when he begins the next chapter of his career. Photo by Peter Bretzman

Andrew Commers' work ethic and qualities would fit nicely in a lunch pail, but a hockey bag will do.

Doesn't exactly sound like a dream job, but that's what it's become for Commers, who made a commitment one month ago to play college hockey for RPI beginning next season.

He's a workhorse. His father has observed that quality in him his whole life. "He's a typical oldest child," dad said. "He's very focused. When he puts his mind to something, he's going to get it done."

A perfect example: When he saw upperclassmen such as Christian Isackson, Justin Crandall and good buddy Zach Schroeder earn their way onto Division I hockey teams, Commers established the same goal for himself. And he got it done.

While Commers is undoubtedly thrilled, all he could do was sing the praises of others who aided him around the rink. Schroeder, for one, was a role model at St. Thomas Academy. He just finished his freshman season at RPI, where the two will be reunited with the same sweaters next fall.

Coming up through the Edina youth hockey system with Louie Nanne, the Edina senior-to-be and Gophers commit, Commers found a mentor in Marty Nanne, the son of hockey legend Lou Nanne and Louie's father. Marty coached him for nearly 10 years.

"He's pushed me every year throughout my hockey career," said Commers, who scored 46 points in 31 games this past season. "He's always been there for me, too. He's just a great person."

And those two goals he scored in the 2011 state championship victory? He couldn't take much credit for those.

"I got pretty lucky," he said. "My linemates were really helping me out there in that final game. I remember Petey Krieger made some great passes. Same with Alex Johnson."

Commers left the Edina youth program to attend St. Thomas Academy, where his father and grandfather both attended, as a ninth-grader. He split time between JV and varsity as a freshman, gaining an immediate respect for coaches Tom and Greg Vannelli.

They have back-to-back Class 1A state championships to show for their efforts.

That's exactly what Commers brings to the rink every day, and now he's going places.

Commers started talking to some schools after his junior season with the Cadets. He journeyed out east for a hockey camp to try and garner some exposure. While several schools were interested, they wanted to see what he could do in at least one season of junior hockey.

He has nothing against juniors, but that didn't fit his plan. Commers sees himself pursuing a business management degree that he'd like to put to use in the family business. With more and more college hopefuls getting some junior hockey experience before stepping on an NCAA rink, he knew it would be a tall order.

"I knew I needed to work even harder, because for me to be able to go straight in, I'm going to have to be playing my best," he said.

Then RPI stepped in. After having Commers out for a visit, the school offered him a spot on the team for the 2012-2013 season. He jumped at it.

But with four forwards leaving the college program and another four entering, Commers will not just be handed a spot in the everyday lineup.

"At RPI, it's all about who's working the hardest and who's showing up to play," he said. "I feel I'm just going to have to bring my A-game every single day to get into the lineup and play."