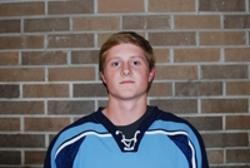 Brodzinski and Heinrich were recently selected to the All-Star Game roster at the USA Hockey Select 17 player development camp in Rochester, N.Y., two of six Minnesotans who played high school hockey last season to be named.

Brodzinski turned down an invitation from the National Team Development Program in Ann Arbor to play at Blaine as a junior last season.

Brodzinski, bound for Muskegon, Mich., netted 16 goals and added 20 assists as a junior. His season ended on a down note in the Class 2A, Section 5 finals against Maple Grove. Called for checking from behind and a misconduct penalty just 19 seconds into the game, Brodzinski spent 15 minutes in the penalty box. Maple Grove built a 6-0 lead during that span en route to a 15-1 victory that ended Blaine’s run of six consecutive state tournament appearances.

As a sophomore, Brodzinski scored two goals – including the overtime winner – to defeat Maple Grove in the section title game.

Older brother, Jonny, is a St. Cloud State recruit who played for Fargo of the USHL last season. He graduated from Blaine in 2011 and was one of 10 finalists for Mr. Hockey as a senior.

Heinrich added 11 goals and 24 assists to Hill-Murray’s offense but his defense and fierce hitting were equally important to the Pioneers' second place finish at the Class 2A state tournament. He will play for Sioux City, Iowa, next season.

Ahlgren posted 23 goals and 32 assists for Fergus Falls last season. He will play for Sioux Falls.