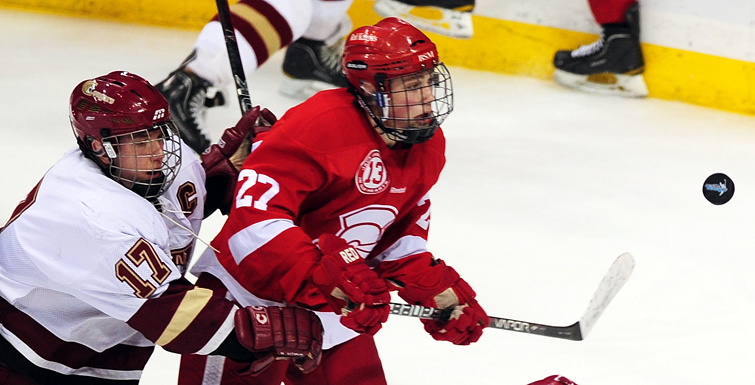 Dan Labosky, right, scored three goals against Lakeville South in the semifinals of the state Class 2A tournament in March. Photo by Adam Crane

Upon meeting Dan Labosky for the first time, movie buffs invariably make a reference to the Coen brothers’ classic, "The Big Lebowski."

“Yeah,” Labosky said. “If somebody sees my name, that pops up sometimes.”

Labosky, a Benilde-St. Margaret’s forward who is not particularly big at 5-foot-7, 150-pounds, is undoubtedly fatigued by questions about the 1998 cult classic flick, but he doesn’t show it.

The kid they call "Lobo" politely answers questions about the movie, “It’s funny,” and his bowling skills, "I'm okay. Nothing special," before moving on to more pertinent topics.

Labosky recently returned from returned from the USA Hockey Select 17 development camp in Rochester, N.Y. He scored four goals in five games and was named to the camp-ending all-star game.

The senior-to-be talked about that experience and the possibility of the Red Knights repeating as state Class 2A champions in an interview this week with the Hockey Hub.

Question: What was the competition level like at the national Select 17 camp in Rochester?
Answer: It was really fast. It kind of felt like a USHL tryout camp. The kids were like high schoolers. I thought it was pretty close to Minnesota high school pace. It was a good experience. I played against (Minnetonka’s) Vinni Lettieri. I like playing against him because we kind of like to challenge each other. It’s fun and hard to play against him because of the competition we have with each other. We also have a good friendship. He was probably the best forward on his team.

Q: Were you surprised by anything that happened at the camp?
A: Not really. Some guys that made the (U.S. U-18 team that will play in eastern Europe in August) weren’t as good last year but then they got a lot better and they made the team this year. I was disappointed I didn’t make it, but everyone that did was really deserving.

Q: What is your best memory from last year’s state championship game?
A: Probably before the game in the locker room when we were saying our prayer with our chaplain. Just thinking about the game and everything and how far we had come to get to that moment. I remember thinking we can definitely win this championship, how it would be a cherry on top of what had been a roller coaster season. I remember thinking about Jack (Jablonski) and not just necessarily wanting to win it for him, but to win the championship for all of us and just making him happy and seeing that smile on his face. I can definitely remember before and after in the locker room. I don’t remember much from the actual game.

Q: A big-school team hasn’t repeated as state champion since Bloomington Jefferson in 1994. Why do you think winning back-to-back titles has become so rare?
A: We kind of talked about this with (Benilde-St. Margaret’s) coach (Ken) Pauly. Usually championships follow the seniors. Eden Prairie had Nick Leddy and then Kyle Rau and those guys. Edina had a bunch of seniors in 2010. There are a lot better players being developed all over the state and not just in the metro area. I think the level of play has gotten significantly higher since back in the 1990s. It’s definitely tough to repeat now with so many great teams.

Q: Do you expect to play on the same line with Grant Besse and T.J. Moore again this season?
A: Yeah. That’s kind of what we are thinking right now. I’m definitely looking forward to that.

Q: What is it like playing with those guys?
A: They make the game a lot easier. T.J. can do it all. He can play defense, score goals, make plays. Besse does everything well, too. He has great vision. I think that’s what people don’t see in his game. I think all three of us kind of complement each other.

Q: Who among you three wins an end-and-back race?
A: I don’t know. I think it would be close. I want to say I would win (laughing). But Bessse is pretty fast, too. And T.J. gets faster and faster every year.

Q: Does your line have a nickname?
A: No we don’t. Maybe you can come up with one for us.

Q: How would you describe your personality out on the ice? Do you try to get the opposing team riled up?
A: I feel like I just try to be the best player every time I step on the ice. I hate losing. I’m just trying to be feisty and tenacious. And just use my speed to my advantage. Mostly, I would just say I’m trying to compete.

Q: Who would you consider to be Benilde-St. Margaret’s biggest rival and why?
A: I would probably say Minnetonka. Because they are in our section and stuff. I know a lot of kids from our schools are friends. We’ve had some great games with them since I’ve been in high school. 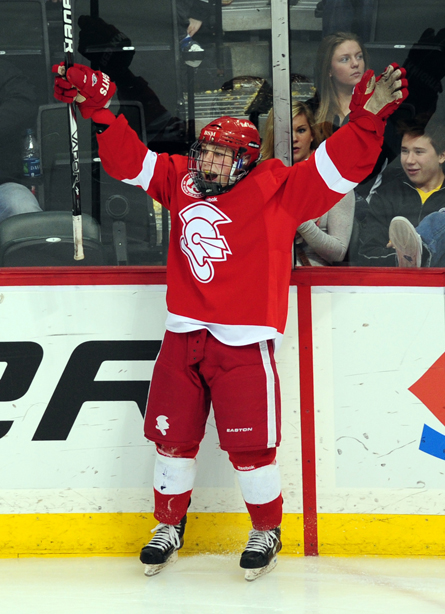 Dan Labosky, who will be a senior at Benilde-St. Margaret's this season, has committed to play at Colorado College. Photo by Adam Crane