Q and A with Cloquet forward Karson Kuhlman, who is on record-smashing scoring pace 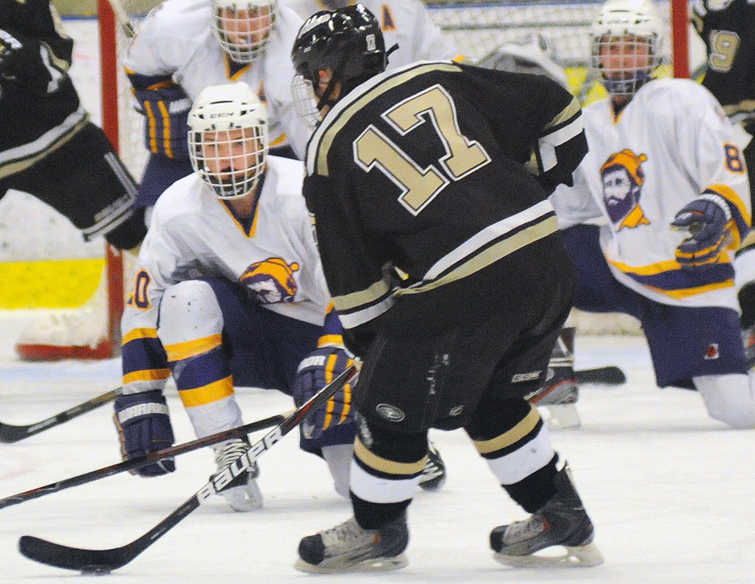 Karson Kuhlman, a high-scoring forward who isn't above blocking the occasional shot, has scored 107 points in his first two seasons. Photo by Tim Kolehmainen

Straight-shooter seems to sum up Karson Kuhlman pretty neatly, and we aren’t just talking about his scoring prowess on the ice.

The Cloquet/Esko/Carlton sniper is about as candid as they come, and he recently talked to the Hockey Hub about topics ranging from his playing future (Minnesota-Duluth, Minnesota and Colorado College all have caught his attention) to his most embarrassing moment (being “pantsed” as a youth soccer player).

Kuhlman, who will be a junior for the Lumberjacks this season, already has 107 career points. According to Cloquet coach Dave Esse, himself a former Lumberjacks standout, Kuhlman is on a scoring pace that would have him surpass legendary former Cloquet players such Corey Millen, Jamie Langenbrunner and Derek Plante.

For now, Kuhlman is just looking forward to playing with longtime buddies and linemates Beau and Westin Michaud and against hated rival Duluth East.

Question: How excited were you to learn you had made the U.S. national select U-18 team coming out of the recent USA Hockey camp?
Answer: Even more than being excited, I was honored. It will be the first time for me wearing the USA jersey. I think that is something every kid growing up dreams about.

Q: As part of the national team, you’ll be heading to eastern Europe in August to compete in an international junior tournament. Have you traveled outside the country much?
A: No. I’ve been to Canada to play some hockey and fish a couple of times. That's it.

Q: What are you expecting from the trip?
A: Obviously a long plane ride, which I am prepared for. That will be the worst.

Q: What do your parents do for a living?
A: Both of them work at the 148 guard base. (The Duluth Air National Guard Base, which is home to the 148th Fighter Wing).

Q: How has their military background affected the way you have been raised?
A: They raised me the right way, I feel like. They are strict when they need to be. They also are great parents. They love me 100 percent. They support me in whatever I do and whatever decisions I make, which is nice knowing that I have some big decisions coming that I have to make.

Q: Speaking of big decisions, have you decided where you want to play your college hockey?
A: I have not. I am still uncommitted. I am taking it slow, taking my time. I just want to make the right decision. It will come in time. 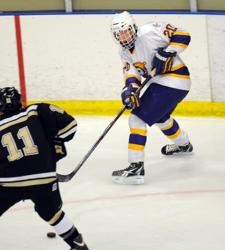 Cloquet's Karson Kuhlman will be one of five Minnesotans competing for the U-18 U.S. junior team in a tournament in eastern Europe in August. Photo by Tim Kolehmainen

Q: What are your priorities in a school and its hockey program?
A: Obviously academics is a priority. My family is huge into school and academics, and that’s a big part of our life. I want to feel comfortable with the coach, I feel like that is really important, that the playing style fits my game.

Q: Did the heavy rain and flooding from the big storm that went through the Duluth area in late June affect your home or your neighborhood?
A: Luckily our house was safe. I actually live in the small town of Esko, and we have the St. Louis River close by. There were some businesses that were close to the water and we all went down there and started sandbagging for a good couple of hours.

Q: I probably know the answer to this, but who do you consider to be Cloquet’s biggest rival and why?
A: Duluth East for sure. That’s just the way it has always been. You grow up just despising those guys. Which is just awesome. It is so good for the game here. The atmosphere when the game is going on, it’s just crazy. I’ve been fortunate to play against them four times and every one of those games has been a pleasure.

Q: You have lost all four of those games against Duluth East, right?
A: Yes. That’s a goal, hopefully this is the year we beat them.

Q: It seems like some people were assuming you weren’t going to play for Cloquet this season. Where do you think they got that idea?
A: I went down to (Dubuque, Iowa of the USHL) last spring and played five affiliate games for them last spring. So that could possibly have something to do with it. I enjoyed myself, it is awesome hockey … but I wasn’t ready to leave home. I couldn’t leave everything we have in Cloquet, all my friends. The Michaud brothers, they are great guys, and I’ve been playing with them since were kids. They great guys on and off the ice. They work their butts off.

Q: Cloquet’s has produced some legendary high school players, guys such as Corey Millen, Jamie Langenbrunner and Derek Plante. What would it mean to you to someday join that elite group?
A: That would be awesome. Cloquet bleeds hockey. It is just an awesome environment here. For people to be talking about me with those guys, that would be quite an honor. My dad always talks about Corey Millen and what a great player he was.

Q: How do you like to spend your summers when you aren’t playing hockey?
A: We go up to the cabin quite a bit and we fish. Other than that I spend a lot of time at the rink working out with my teammates.

Credentials: Kuhlman scored 55 points (27 goals, 28 assists) last season as a sophomore who showed no signs of a slump after an outstanding 52-point (17 goals, 35 assists) freshman season. Kuhlman's two-year point total of 107 puts him on a scoring pace ahead of Cloquet High School legends Corey Millen, Jamie Langenbrunner and Derek Plante.

College committment: None. Minnesota-Duluth has expressed interest, as has Minnesota and Colorado College. Kuhlman, who has not yet received scholarship offers, hopes to make at least a couple of campus visits this summer.

Car I would like to drive: Something big. A Cadillac Escalade.

NHL player I try to emulate: I love the way Jonathan Toews plays.

Most embarrassing moment: I was playing soccer, probably U-10 at the time, and I got pantsed on a penalty kick. I don’t even know how it happened. It was crazy.

Last book you read: Raising Stanley. It's about the Stanley Cup.