Rise of the Skipper

Q and A with Minnetonka defenseman Tommy Vannelli, who is in the midst of a superb summer 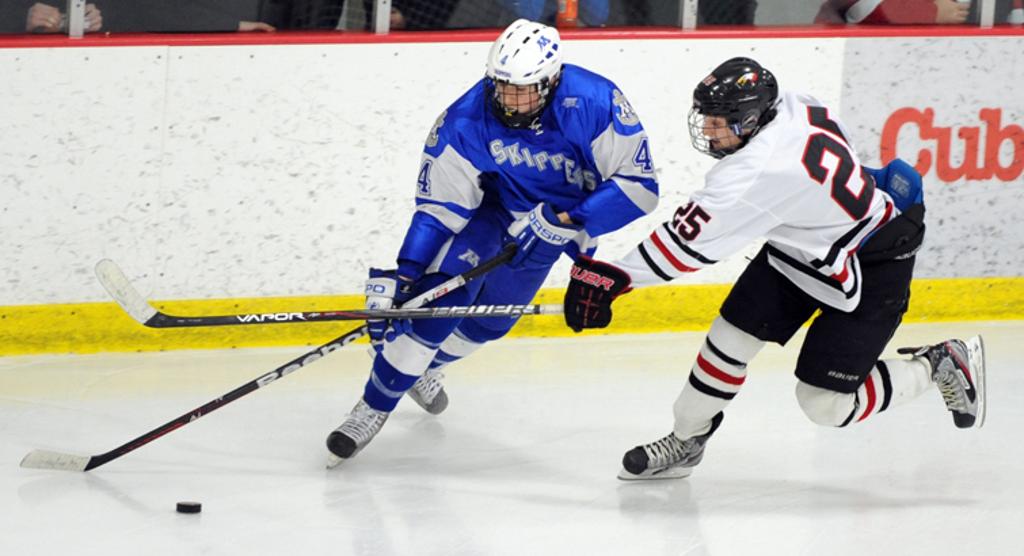 Tommy Vannelli’s recent rise to prominence as a coveted Division I recruit seemingly came out of nowhere.
A defenseman forced to play on the junior varsity his sophomore year after transferring to Minnetonka from Holy Family Catholic, Vannelli felt his way through an adjustment period last season as he adapted to the quicker pace and harder hits at the varsity level.
Vannelli extended a strong finish to the high school season deep into the spring, when he was part of the Minnesota contingent invited to the USA Hockey Select 17 Player Development Camp in Rochester, N.Y.
His play in New York in late June earned him a spot on the U.S. Under-18 select team that will compete in the Czech Republic and Slovakia in mid-August.
Since returning home the number of top college programs interested in Vannelli’s services has more than doubled. He received an invitation to join the U.S. National Team Development Program. Vannelli declined.
Yeah, it’s been quite a summer for Vannelli, who has been working out with legendary trainer Jack Blatherwick, skating regularly with his Skippers teammates and keeping his Twitter followers up to speed with his latest adventures.
Twitter posts aside, Minnetonka coach Brian Urick likened Vannelli’s superb summer to that of former Skippers’ defensemen Jake Gardiner and Justin Holl as they headed into their senior seasons.
Like Vannelli, both Gardiner and Holl synchronized their improving skills with their growing bodies, offering a mouth-watering package to the Division I programs lined up to acquire their services.
Gardiner, who plays for the Toronto Maple Leaf, received a scholarship from Wisconsin. Holl is still playing for Minnesota. Both were Mr. Hockey finalists.
The Hockey Hub recently caught up with Vannelli long enough to ask him about his training sessions with Blatherwick, what he’s looking for in a college program and who he considers to be Minnetonka’s biggest rival.
Question: How excited are you to play on the U.S. national team in eastern Europe?
Answer: Extremely. Really excited. It’s a treat to be a part of it.
Q: Did you see that coming?
A: I don’t know if I would say I expected it. I always thought I had the capability to do it. Over the summer I just kept on getting better and better. Halfway through the camp I thought I had a shot at it.
Q: What are you expecting from the trip?
A: We had a little meeting with the USA coach (Matt Herr) before we left New York. He said be prepared and keep working to stay on top of your game. They will have an Olympic sheet over there, and he just told us to come prepared. We will be with the team for a week in training camp before we leave to play in the tournament.
Q: Have you traveled much out of the U.S.?
A: Not really, other than going to Canada a few times.
Q: You had an offer to join the U.S. National Team Development Program and turned it down. Why?
A: I think it was mostly because I wanted to play with my buddies one last year. There is nothing like playing with your friends and in the really great atmosphere at Pagel. This is our last year and we all want to do this together. I want to pretty much cherish this season and hopefully have a great year. We’re really looking forward to getting to the winter.
Q: What sort of off-ice training have you been doing this summer?
A: I work out with a guy named Jack Blatherwick at Parade and Blake. Legs is probably the biggest thing he works on. We usually do sprints after we squat. He works with the (Benilde-St. Margaret’s) players and they are so fast, like (Dan) Labosky is extremely fast. We do a lot of sprints, and you can see how Benilde is so explosive. (Blatherwick) definitely does it different than a lot of people do. It works for me and it works for a lot of people.
Q: What’s with the "Throwback Thursday" photo on your Twitter page?
A: That was me when I was little guy. That photo was probably taken in Florida. We used to go down there a lot when I was little.
Q: Who do you think is Minnetonka’s biggest rival and why?
A: We always have good regular season battles with Benilde-St. Margaret’s. Last year in the section final brought the rivalry to a whole another level. It seems like we go back and forth every year. Edina would probably be a pretty big one, too.
Q: How you are related to the Vannellis at St. Thomas Academy (brothers Tom and Greg are the co-head coaches of the defending state Class 1A champion Cadets).
A: I think they are my second cousins. They are on my dad’s side of the family.
Q: What are you looking for in a college and it's hockey program?
A: I’m not really sure what I am looking for. I’ve been told that when I go to a college it will just feel right.
Q: Are you looking for a program that plays a particular style or has a system that you think suits your game?
A: Wisconsin, with their past history, they kind of a have a track record of developing defensemen. Guys like Jake Gardiner and Justin Schultz. They are more geared toward offensive defensemen. I think I am a little more suited for that style of play, more playmaking and getting into the flow of the play.
Q: What do you expect for this season? How is Minnetonka going to do?
A: We are not going to be as deep with all the seniors we lost but we will still be good.

Credentials: One of 22 players, and one of seven defensemen, picked to represent the U.S. on the Under-18 select team at the 2012 Ivan Hlinka Memorial Tournament on Aug. 13-17 in the Czech Republic and Slovakia. Vannelli scored seven goals and had 18 assists in 28 games last season for the Skippers.

College committment: None. St. Cloud State, Minnesota State and Minnesota all had been showing interest in Vannelli before his breakout peformance at the USA Hockey Select 17 player development camp in late June. Numerous other programs have joined the recruiting fray since then, including RPI, Ohio State, Wisconsin, Michigan Tech and Maine. Vannelli already has visited Wisconsin and has several more recruiting trips planed.

Last book you read? Zach’s Lie. "It's about a family that goes in the witness protection program."

Favorite hockey movie? The Goon. I just saw it. I thought it was hilarious.

NHL player you would most like to emulate? Mike Green (Washington Capitals defenseman).

Car you want to drive? Escalde

Best player you've ever been on the ice with? Nathan MacKinnon. He’s a Canada kid that will probably go No. 1 in the NHL Draft next year. I don’t know where I played against him, maybe a Triple A tournament somewhere.