Defender of the hive 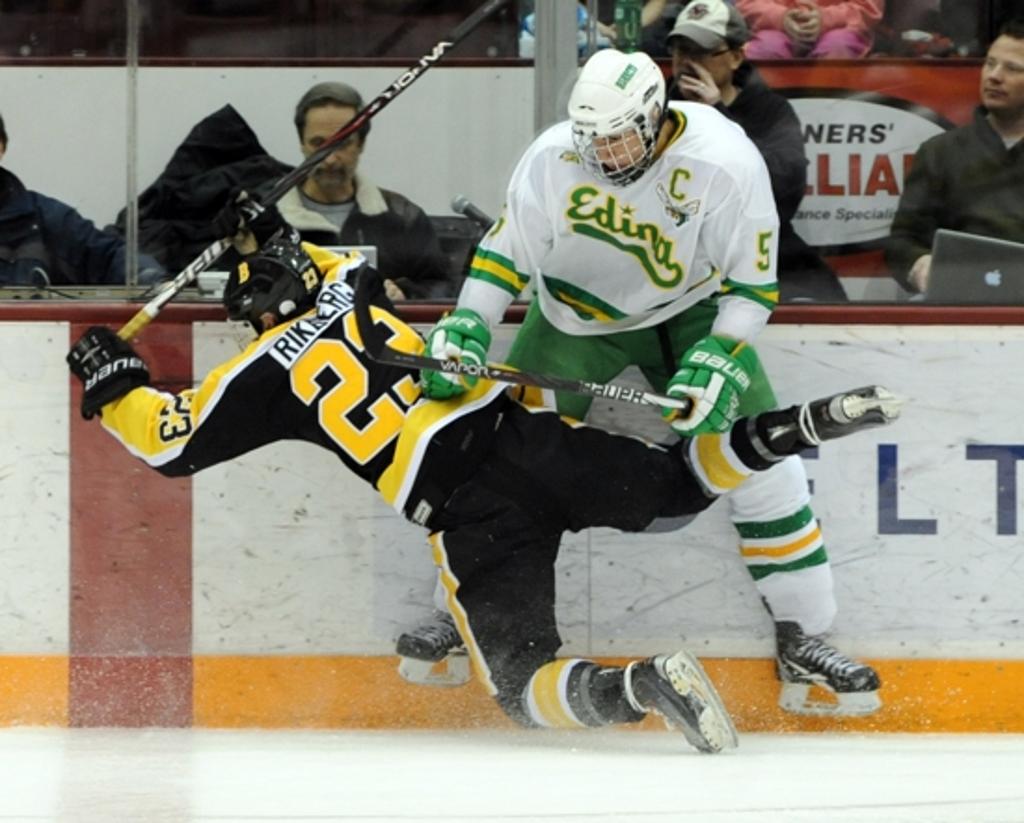 For most of his career, Parker Reno hasn’t been the headline name for the Edina Hornets.

Flashier names like Louie Nanne tend to stand out, and recently the green tag team of sophomore Connor Hurley and freshman Dylan Malmquist has caught the spotlight.

Quiet and steady in the background however, Reno, a senior defenseman has been attracting attention from scouts, colleges and USA Hockey.

It's time everybody else start paying attention as well.

After this summer, Reno will be nearly as experienced as any player can get at the high school level.

In September, he'll take his third go round in the Elite League, although as a sophomore he missed the majority of the action due to injury.

With the Elite League, the international tournament, and winning a state championship in 2010, Reno is accustomed to a high level of play.

More of a lock down defender than a freewheeling offensive threat, Reno only put up two goals and 14 assists last season, but his presence on the back end is a welcome constant for any team he plays on and will be key for Edina's state tournament hopes in the upcoming season.

We caught up with Reno for an update on his eventful summer and a promising year ahead with the Hornets. 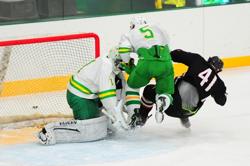 Question: Have you played against anybody in the U-18 tournament before?
Answer: No I have not, this will be my first international tournament.

Q: What parts of the tournament are you excited about the most?
A: The experience of it all. I’ve never been overseas so it will be different flying over there and playing some hockey, but I’m looking forward to it.

Q: Do you think the style of play will be different in Europe? What do you think you will learn as a player?
A: Just playing at a higher level. Also, it’s a bigger rink over there. It’s an Olympic sheet so you kinda have to get used to that. You kinda play the same but obviously in the corners it’s a heck of a lot different especially.

Q: What else have you been up to this summer?
A: Well I’ve been doing a lot of lifting and training with my high school team and I’ve been doing all the steps to get to the USA Hockey select stuff and I did another camp earlier this year.

Q: What do you think Edina’s biggest strength will be in the upcoming season?
A: I think we’ll be good, I think we’ll be deep. We’re only losing two skaters and otherwise it’s pretty much the same team we had last year. If we could get to the state tournament last year then we should be more mature and more experienced and really more skilled too.

Q: What do you see role as on the Hornets?
A: Really just strong defensively, get the puck up to the forwards. Really just that.

Q: Give me a quick scouting report on yourself.
A: I’m a good defensive defenseman that’s active in shutting down plays and moving it up to the forwards and can also add a little offensive if need be.

Q: With the younger kids on the team, do you have to keep them in line?
A: [Laughter] I dunno, I wouldn’t say that much. To be honest with you, even the older guys are just as bad as the younger guys. It doesn’t make a difference.

Q: This summer will be your third year in the Elite League?
A: On paper it’s my third year but my sophomore year I played in the first week and then got injured and missed the rest of it. So I really didn’t play my first year.

Q: What’s your favorite part of the Elite League?
A: There’s a lot of good players from around the state so the competition is really high. I get to play with people I played with in AAA tournaments when I was younger and I get to know some guys from other cities and just playing really competitive games.

Q: Team Southwest is full of kids from rival schools like Benilde-St. Margaret’s and Minnetonka. Is it weird to play with them on a team?
A: Well I guess. I mean, it’s not really that bad because at that moment we’re kinda on our team so we’re not really worried about it.

Q: Edina has had a recent history of skaters leaving early to play in various junior leagues. With all the exposure that you’re getting, what made it appealing to stick with high school hockey?
A: Growing up and everything I’ve pretty much only dreamt about playing for Edina. So I don’t feel like I need to rush anywhere because playing here is a dream come true. I don’t have to go to the USHL to fulfill my dreams or anything. There’s just so much tradition and I want to win another championship.

Credentials: Reno was selected as just one of seven defenseman on the United States U-18 squad to represent the county at the 2012 Ivan Hlinka Memorial Tournament that takes place from August 12-17 in both the Czech Republic and Slovakia. As a junior Reno netted two goals and notched 14 assists for the Hornets. This season will be the third time he has made an Elite League team.

College committment: None. Even after some prying, Reno was hesitant to give any specifics. He did say he's been in talks with several colleges.

Score a goal, or dish a hit? Dish a hit