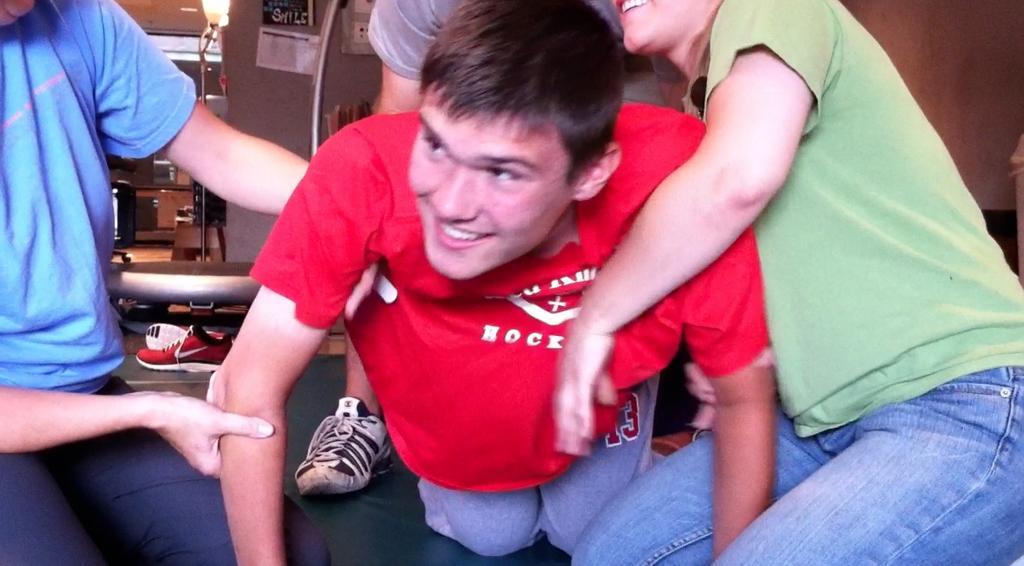 In this image, pulled from a video shot by a family friend, Jack Jablonski crawled with help from Courage Center therapists during a rehab session.

With help from therapists, Jack Jablonski crawled and experienced other "significant events," his family said Monday.

In a Caringbridge.org posting that includes a video of the session last week, the paralyzed Benilde-St. Margaret's High School hockey player crawled with help from three therapists while at the Courage Center rehabilitation facility in Golden Valley.

"That was awesome!" one of the high schooler's helpers said as Jablonski's right leg moved forward.

"Yes, that was you," came the response.

Jablonski is a patient in Courage Center's two-year-old ABLE program, where people with spinal cord injuries work through various exercises with the help of therapists and trainers. In the crawling exercise, therapists provide support to the patients on their hands and knees, wait for the patient's muscle to contract, then help guide the motion, said Rachel Kath-Dvorak, who supervises the program.

Therapists aren't sure how much patients might be able to improve in the ABLE program, she said.

"We've seen some really amazing things from all of our clients," she said. "We're very optimistic... We don't know what it all means, but we know it's all positive."

Jablonski was paralyzed in late December during a junior varsity hockey game. Doctors said he would not walk again.

In late May, Jablonski told his Twitter followers that he had slightly moved his left leg, ankle and finger. His mother, Leslie, also posted on CaringBridge about that time that Jack was strapped into a harness and worked on a treadmill.

The recent CaringBridge journal entry, written by Jablonski's mother, said that "ever so slowly, Jack moved his legs and crawled. And crawled and crawled. Three times back and forth on the mat. He didn't want to stop! Certainly a stunning moment for all."

Leslie Jablonski said she and her husband, Mike, missed the moment but were thrilled to see it on film.

"It just gives us a lot of optimism," she said in an interview. "Something good is going on."