Opportunity – for a price

Private academies offer intensive training, but no guarantee of results 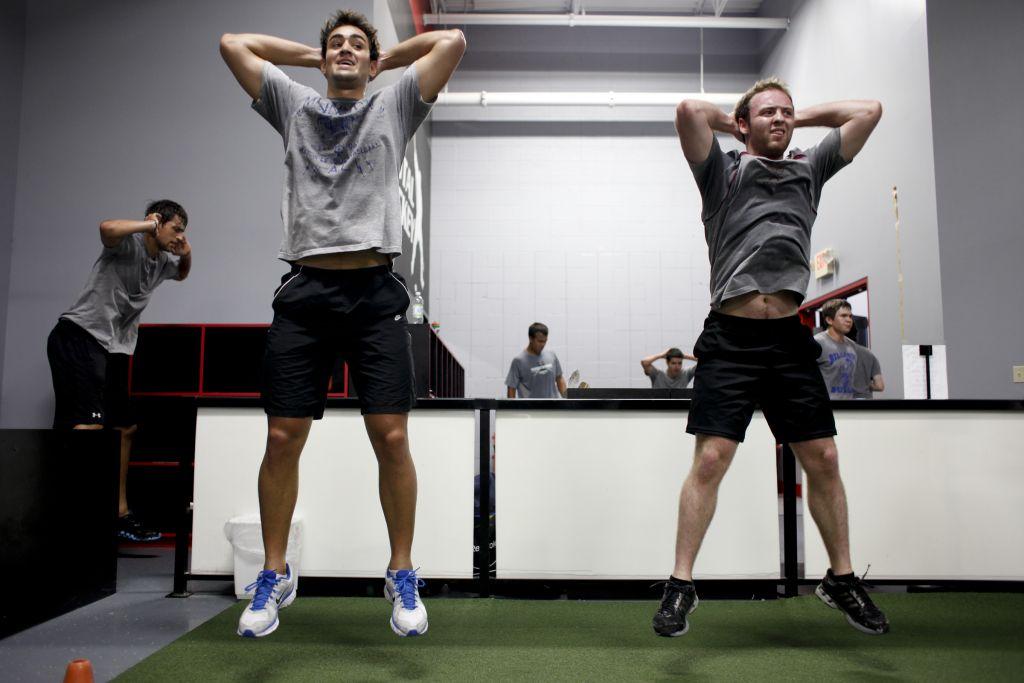 Behind the walls of an old grocery store in Lakeville is Reed Smith's playground. For at least two hours, four times a week, the 13-year-old bounces around the warehouse with purpose.

The food aisles have been replaced with athletic equipment and ice, and the store clerks with certified trainers, transforming this building into Total Hockey Minnesota training academy.

Along with the couple hundred other hockey players of all ages from all areas of the Twin Cities and beyond, Smith and his older sister Annabeth spend considerable time and family resources for a chance at becoming the sport's elite.

"It's very competitive," Smith said about the training environment. "I do believe it's good for me. It helps me excel in my hockey career to be like the pros. It's necessary."

The quest for athletic success, perhaps even a college scholarship, has led the Smiths and other families to search for ways to keep up. Sport-specialization academies are fulfilling the demand created by kids and parents who are willing to give a lot in the hope of earning much more.

With two kids in the Intense Hockey Training program at Total Hockey, the Smiths spend about $5,000 for the seven-month service. It's a taxing financial commitment; the parents regularly ask their children if the cost is worth the return.

The rise of academies has ruffled concerns from more traditional athletic communities that say they give the appearance of ensuring athletic success when it can't be guaranteed. However, Total Hockey Minnesota, the Minnesota Baseball Academy, 43 Hoops (basketball and volleyball), Mizuno Northern Lights (volleyball) and the Minnesota Thunder Soccer Academy are just a handful of the providers that claim to offer the Twin Cities' athletes the best training and opportunities.

These for-profit academies differentiate themselves from more traditional seasonal camps and leagues by offering year-round instruction from paid full-time employees and competition against high-level club programs and other academy-bred athletes. Mostly housed in warehouses, these businesses feature game-like playing surfaces and come stocked with weight rooms and sport-specific training equipment.

For a chance to reap success similar to that of local academy-trained professional athletes Kris Humphries of the Brooklyn Nets (43 Hoops) and Zach Parise of the Wild (Total Hockey), 15-year-old Emily Torve committed to academy life as a sixth-grader. She is among the many athletes and clientele convinced their athletic ability would not be the same without a very healthy relationship with the Hopkins-based 43 Hoops basketball and volleyball academy.

"If I didn't play club, I wouldn't progress as much as I could," said Torve, also a varsity volleyball player at Heritage Christian in Maple Grove. "My coaches told me how I could get better [in club]."

With three daughters committed to Club 43 volleyball, Lisette Torve is convinced of the merits of academy training though she joked about spending all of her kids' college money now.

"It's insane. Lets just say that," Lisette said about the annual financial obligation to academy life that goes well beyond monthly fees when regular travel and high-end equipment are factored in. "It's a huge money commitment."

Not everyone, though, agrees that academies are a prerequisite for high school athletic success. Stillwater Area High School softball coach Bob Beedle won a Class 3A state championship this past spring with a roster he believes was solely developed by the community's youth organization.

"I think that if you needed help, you can usually find help within your organization or association," Beedle said while taking a break from coaching a local summer softball team. "I'm not for or against [academies]. But I think some people think the more money you spend, the better your kid will get. I don't think there is a direct connection. I would never send our child into something like that."

"Sometimes parents feel the pressure to keep up with what everyone else is doing," Barta said. "There is a lot of emphasis from a player-parent standpoint that you have to get lessons to be good."

Nearly every second of the 60 minutes Gabrielle Bolcer and sister Christina spent with 43 Hoops instructor and former Ohio State point guard P.J. Hill was documented. The footage recorded by Mom, Dr. Sarah Bolcer, would be downloaded to the computer for evaluation at a later date.

Each drill and critique Hill offered the 12- and 10-year-old was revered, something the Bolcer family longed for.

"We wanted to get them more training and more skills," Sarah said. "There is so much competition in schools right now. They needed more and [43 Hoops] has solid instructors. I wish I had realized it earlier."

Academies rely on such need and praise to succeed financially. Like any business, positive word-of-mouth leads to more attention, more athletes and more income.

Some well-established academies in the Twin Cities have grossed seven figures annually but also stack up monthly bills that can reach $50,000.

Owners advertise the service as a way to help athletes of all ages meet their full potential in life, though it's also a way to make a living.

"I want to be the best at whatever I'm doing, whether it's playing or coaching or now as a business owner," said Chris Carr, 43 Hoops CEO and former NBA player. "Any business that people are owning and operating, you have to have money for that business to run effectively."

Looking for an edge

It's easy for Chanhassen parent Janelle Carlyle to recognize athletes involved with an academy. They're often the ones that stand out on the field, she said.

"From the skill level of the other players, it shows," Carlyle said, while waiting for her son to finish his tryout for the Blizzard Elite baseball club. "If you don't do it year-round, you get left out."

Though it's against school policies and Minnesota State High School League rules to require student-athletes to participate in academies and club teams, Carlyle and her son Mitchel are convinced it's the ticket to a varsity roster spot. The mother encouraged her son to extend his commitment beyond high school.

Former Stillwater three-sport athlete Morgan Stippel felt that same pressure, and instead of helping her, it hurt. She tried to live up to the demand and believes it eventually led to a string of injuries and surgeries that required her to sit out her senior season.

"A lot of coaches, I feel, pressure athletes that play their sports to be on the clock doing [AAU and year-round training] if you want to make varsity next year," said Stippel, now 19. "You almost feel bad about it. You're like, 'Well, I don't want to let Coach down or have someone pass me up.'"

Pam Byrnes and Shannon Burger of Orono welcomed the academy's presence in their community. The moms said it provided their 9- and 10-year-old sons with extra work and the best chance to succeed.

Proud to produce the best

Blizzard Elite baseball graduated all of last year's elite team members onto a college baseball roster. Mizuno Northern Lights did the same and documents it on its website.

Kirk Olson, general manager and part owner of Total Hockey Minnesota, has helped transform his academy into what he described as the "best" in the chain of nearly a dozen Total Hockey-affiliated businesses around the country. A group of international athletes supports his claim by traveling thousands of miles to train in the warehouse full of special training equipment and an ice rink.

Even professionals have been impressed. Parise, the Wild's newest acquisition, spends many days of his offseason at the Lakeville-based facility.

"Life for the most part is competition. Whether it's a job interview or whatever. Competition is preparation," said Olson, who also is the Wild's strength and conditioning coach.

The high-intensity instructor isn't worried about any negative perceptions outsiders may have of academies. He is well aware of all the athletic options families can choose from and encourages each to pick one that best suits their needs.

"That is why training centers present themselves," the 40-year-old Olson said. "I think the onset of AAU put young kids into position where you almost have to specialize early on. Back when I was young, you'd just go to the park and play all the time."