When Garrett Riebling enrolled at Holy Family Catholic as a freshman three years ago, the plan to build the Fire into a state superpower hadn’t yet been hatched.
“I went there because my brother went there,” said Riebling, a senior who hails from Chanhassen.
These days there’s not much left from Riebling’s freshman season – other than Riebling.
The high-scoring forward has seen, in no particular order, Holy Family Catholic undergo a coaching change, be hit by a tidal wave of young talent, aggressively upgrade its schedule and make the jump from Class 1A to 2A.
“I never expected any of that,” said Riebling, who scored 17 goals and added 16 assists last season. “It has been great.”
Riebling is, in effect, the guy who gets the unexpected upgrade from coach to first class.
The ride has taken him to the Upper Midwest High School Elite Hockey League, where Riebling is one of three Holy Family Catholic players suiting up for Team Northeast.
Riebling, playing on a line with Fire sophomore John Peterson, scored twice in Team Northeast’s 6-3 victory over Team Southeast on Saturday, Sept. 15, at the Schwan Super Rink in Blaine.
“You never know when or from where you are going to get a pass from him,” Riebling said about playing with the speedy and savvy Peterson, who spent most of last season skating alongside Shane Gersich, another Holy Family Catholic sophomore playing in the Elite League (he’s on Team Southwest).
When Gersich left the Fire midway through last season to play for the U.S. in an international junior tournament, Riebling was paired alongside Peterson, who finished as the Fire’s leading scorer with 63 points (22 goals, 41 assists).
“We had some chemistry,” Riebling said, adding he isn’t sure what the Fire will have for line combinations this season.
The 5-foot-7, 160-pound Riebling says he doesn’t particularly care who skates with during the high school season.
“We’ve got a lot of great young players,” Riebling said. “I think we’ve all gotten better this summer just through all the training we’ve been doing.”
Just how improved is Holy Family Catholic? The answer will come early.
The Fire open their season on Nov. 23 against state Class 2A superpower Edina in the first round of the Wayzata Turkey Trot tournament at Plymouth Ice Center. Holy Family Catholic will play either Maple Grove or Wayzata in the second round.
Two-time defending state Class 1A champion St. Thomas Academy comes next on Dec. 4. The Fire's schedule also includes games against big-school powers Elk River and Wayzata, not to mention defending state Class 2A champion Benilde-St. Margaret’s.
-- Loren Nelson, MN Hockey Hub editor 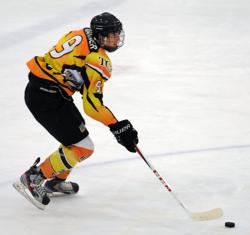 He seemed worn out, scratching a bandage on his chin doing a poor job of covering blood from a cut he suffered earlier in the game. His hockey hair flowed down past his ears, slicked back with sweat.

Warner has the look of a classic hockey enforcer, and he backs it up with his play.

Although he didn’t tally a point in Saturday’s loss, the junior Minnesota State recruit made his presence felt by dishing out punishing hits and getting into jawing matches. By the end of the game, he was nearly thrown out for getting into it with Team Southeast and Holy Family Catholic forward Dylan Woolf.

“Woolf, he’s a softy,” Warner said, smiling with the grin of a trash-talker. “He’s a Minnesota kid so he acts tough when his cage is on but he won’t take it off.”

For the record, fighting isn’t allowed in the Elite League, but that hardly slows down Warner who prides himself on his ability to throw opponents off their games with by being an agitator.

“I’ve been doing it for three years,” Warner said of his role. “I just play that way, I get in their head. Tthey talk to me and take them off their game.

Trash talking aside, Warner isn’t a stereotypical one-dimensional goon. With his strength and stature, Warner is tough to move aside, making him a great shutdown defender in front of the net.

With this skill in the bag, he’s been working to add quickness and agility to his game in order to become a better puck mover.

“I’m a big kid and I’ve already got the hitting down so I need to work on my agility,” he said. “I do a lot of explosives so I can get quicker.”

The ideal player he wants to become is a hybrid of Detroit Red Wings defenseman Niklas Kronwall and Philadelphia Flyers defenseman Chris Pronger.

“Both very physical but Niklas Kronwall can do a lot with the puck and that’s what I’m trying to work on right now,” Warner said.

Returning to Eden Prairie as a junior, Warner should hold down the back end on a team looking to rebound from a tough loss in the first round of the Section 6AA playoffs to underdog Robbinsdale Armstrong. A fearsome sight, kids who aren’t up to the talent in the Upper Midwest High School Elite Hockey League will have a tough time getting around him.

“I’m gonna have to protect everyone and not let us get scored on very often,” he said. “I’m not gonna have to generate offense and assists but I’m gonna be the guy who gets it out of the zone and lets the forwards do the rest.”

Team Northeast’s Garrett Riebling of Holy Family Catholic scored twice, Mitch Slattery of Hill-Murray had a goal and an assist and Rory Davidowski of Totino-Grace made 27 saves in a 6-3 victory over Team Southeast on Saturday, Sept. 15, at the Schwan Super Rink in Blaine.
Riebling, a senior from Chanhassen who has been playing for the Fire since his freshman year, scored on a power play midway through the third period to give Team Northeast at 5-2 lead.
Riebling’s second-period goal came with Team Northeast shorthanded. Wyatt Ege, a defenseman from Elk River, assisted on both of Riebling’s goals.
Slattery, who spent much of he game playing on a line with Riebling and John Peterson of Holy Family Catholic, added a shorthanded goal with 6:26 remaining to complete the scoring.
Davidowski was tested repeatedly in the third period, when he made 12 saves as Team Southeast applied heavy pressure in the late stages.
Alex Johnson had a goal and an assist to lead Team Southeast.
Both teams have 2-2-1 records.
-- Loren Nelson, MN Hockey Hub editor

1. Garrett Riebling, Team Northeast
Reibling led all scorers with two goals. The Holy Family Catholic senior had a great one-on-one goal against defender Jack Dougherty while shorthanded. He added in the third period when he tipped in a goal from the point. Riebling has three goals in five games this season.

2. Rory Davidowski, Team Northeast
The senior from Totin-Grace made 27 saves  to pilot Team Northeast to victory. He looked solid in net and made some spectacular saves on odd-man rushes by Team Southeast. Davidowski has allowed 4.38 goals per game and has saved 87.5 percent of shots faced.

3. Alex Johnson, Team Southeast
Johnson made an impact early when he scored a goal and assisted on another within a minute to give Team Southeast a 2-1 lead in the first period. Although the lead wouldn’t last, the senior from St. Thomas Academy had a nice game. He has four points so far this year with two goals and two assists.