Plenty of impressive efforts to go around Tuesday night.

The Edina Hornets continued their lengthy 8 game homestand and turned aside the challenge from the unbeaten Woodbury Royals by a score of 5-2.  The Hornets (4-1, 0-0) jumped to a 5-0 lead over the Royals and never looked back as Marshall Everson scored a pair of goals to led his club.  Connor Gaarder had 2 assists to go along with a goal and Anders Lee padded his point totals with two more assists.  The Royals did not go away and played to the final buzzer and were rewarded with two goals late in the third period as Connor Delaney and Max Gaede scored in the final 1:36.  Gaede's goal came with just :03 left in the contest.  The Royals (4-1, 0-0) take to the Suburban East Conference schedule with a tough game with White Bear Lake at Aldrich Arena.  The Hornets are off until next Thursday when the open the Edina Holiday Classic at Breamar.

The Blaine Bengals defeated the Elk River Elks 3-1 in Northwest Suburban Conference action Tuesday evening.  In a game that only had four penalties called, the Bengals took a 3-0 lead as Nick Bjugstad scored his 3rd of the season at 15:22 of the first period.  Travis Kovalchuk (no relation to Ilya) and Luke Bayer scored second period goals and hung on in the third period as the Elks outshot them 12-3 and scored early on Nick Filipovich's 3rd of the season at 4:47.  Up next for Blaine (3-0, 2-0)is a pair of conference games this week with Osseo and Coon Rapids. Elk River (2-1, 0-1) has only given up four goals in three games and will look to take their suffocating defensive ways to the Anoka Tornados and North Metro Stars this week.

The Eden Prairie Eagles scored 6 unanswered goals as they defeated the Eastview Lightning 6-1 in Lake Conference action Tuesday night.  After Travis Schweiger scored the game's first goal at 4:18 of the first period for the Bolts, the Eagles responded with Jack McCarten's second goal of the season at 8:02 on the power play.  Taylor Wolfe scored a pair of goals while Dan Molenaar notched a goal and 3 asssits for the Eagles. Senior defenseman Nick Leddy was sterling on the powerplay as he added 3 assists.  Eden Prairie was an efficient 3-6 on the power play Tuesday night improving to 6-11 on the season for an impressive 54.55% efficiency, good for third in high school hockey.   The Eagles (2-0, 2-0) take on Lakeville North and Chaska later this week while the Lightning (2-2, 1-2) travel to Rosemount in Lake Conference action.

The White Bear Lake Bears came off a weekeind in Fargo after dropping two games and took it out on the Forest Lake Rangers who also lost a heartbreaker last Saturday to the Grand Rapids Thunder Hawks.  Max Birkinbine had a hat trick to lead the Bears while they sizzled on the powerplay connecting on 3-8 chances.  After leading 1-0 at the close of the first period, Mike Slator scored what proved to be the game winner just :25 in the second period on the powerplay to propel the Bears over the Rangers 5-1 in a high tempo, well played game.  Owen Collette picked up the win in goal making 25 saves.  Ranger goalie Chris Fritzinger was sensational in stopping several chances off the goal line, in tight, and from the tops of the circles.  White Bear Lake (2-2, 1-0) has a stiff challenge ahead in the 4-1 Woodbury Royals Friday.  Cloquet Esko-Carlton will take on the Bears Saturday afternoon at Aldrich Arena. The Rangers (1-3, 0-1) take on Moundsview next week.

The Benilde St. Margaret's Red Knights have arguably the toughest shedule in high school hockey and they are faring just fine to date as they defeated the Cretin Derham-Hall Raiders 4-2 at the St. Louis Park Rec Center.  Pat Borer opened the scoring with a goal assisted by Brett Patterson at 7:30 of the first period.  The streaky Red Knights scored shortly after the Borer goal, this time as Will Nelson lit the lamp just :35 seconds later to put the Raiders back a bit.  Pat Cron scored his 2nd of the season later in the second period for the 3-0 Red Knight lead in the second.  The Raiders solved Red Knight goalie Jacob Myers at 4:35 of the third period as Bob Kinne scored from Tony Barbato.  Patrick Daly reclaimed the 3 goal lead as he tallied a shortie from Bryan Glynn and Patterson with 1 minute left in the second.  Tommy Zimmerman scored from Mychal Bangs and Mark Alt at 15:54 of the third period.  It would prove to be too little too late as the Red Knights, who relied on Myers to make 27 saves collected the win.  The Raiders (3-0, 0-0) take on Moundsview and Park of Cottage Grove this week while the Red Knights (2-1, 0-0) will battle Meadow Creek Christian on Saturday.

The Lakeville South Cougars broke open a 2-2 tie in the third period on goals by Justin Parizek, Nick Bailey, and Bill Simon added an empty netter to pull away from the Burnsville Blaze by a score of 5-2.  After taking a 2-0 lead on an Alex Quinnell power play goal in the first period, the Cougars expanded their lead to 2-0 at 5:52 of the second period.  The Blaze stormed back on goals by Adam Smyth and Chase Chapman.  Buster Mckay picked up the Cougar win in goal making 27 saves.  The Cougars (2-2, 2-2) travel to the Bloomington Ice Garden to take on the #7 ranked Bloomington Jefferson Jaguars in what always makes a great tilt.  The Blaze (1-4. 1-2) look to get on the winning track as they face off with cross town rival Apple Valley Saturday afternoon at 2pm.

The Redwood Valley Cardinals avenged and earleir 4-2 loss at the hands of the Waconia Wildcats with an impressive 3-0 shutout in Redwood Falls. The Cardinals Hampus Petterson opened the scoring at 5:56 of the second period and Micheal Spielmann added a power play marker at 11:08 of the second to give the Cardinals (3-2, 2-0) some breathing room.  Eric Miller added an insurance policy at 11:32 of the third to help goaltender John Rebstock pick up the 23 save shutout.  The Wildcats (1-4, 1-4 ) will play St. Peter/LeSueur-Henderson/LeCenter/Montgomery-Londsdale on Saturday.  The Cardinals jump back in to Southwest Conference action as they travel to Luverne to take on the Cardinals.

Ike Smith tallied a hat trick and Gregg Malmgren had 2 goals and 1 assist to lead the Armstrong Falcons past their rival Cooper Hawks 6-2.  Armstrong was 2-5 on the power play and outshot Cooper (1-3, 0-1) by a 35-17 margin and were ahead by a 27-9 margin in shots after two periods. The scoreboard was closer however, as the Falcons led 4-2 after two.  Jake Morgen scored both Cooper goals who will play Delano Rockford this Saturday.  Armstong (0-3, 0-0) hosts Osseo this Saturday in New Hope.

Joey Benik continues to assault the goal scoring column as he notched 4 more goals to propel the St. Francis Saints past Mora Hinkley-Finlayson 5-2.  The goals lift him to 14 on the young season to goal along with 23 points.  Not far behind is teammate TJ Belisle who also added a goal and 4 assists on the evening.  For Belisle it is 5 goals 12 assists and 17 points on the season as he and Benik are looking a lot high school's version of Brett Hull and Adam Oates from their St. Louis days.  The two have scored 19 of the team's 22 goals to date.  Mora Hinkley-Finlayson outshot the Saints 36-23 yet goalie Andy Benick was solid making 34 saves.  The Saints (5-0,0-0) host Minneapolis East on Saturday while Mora Hinkley-Finlayson (0-2) battles Spring Lake Park Thursday.

In an Iron range contest, it was Virginia-Mountain Iron Buhl pitching the shutout against the Grand Rapids Thuder Hawks by a score of 4-0.  Will Lustig earned the goose egg making 36 stops in the win.  Chris Westin had a goal and 2 assists and Garrett Hendrickson had a pair of assist in leading the charge.   For Westin, he now has 5 goals and 10 assist for 15 points on the season.  His tag team partner in Hendrickson has 3 goals 7 assists and 10 points to date.  The win catapulted them to first place in the Iron Range Conference.    Virgina-Moutain Iron Buhl (2-2, 2-0)  plays two in a row this weekend as they travel north to take on International Falls.  They return home to face off with the Hopkins Royals on Saturday.  It is a game with neighboring Greenway Thursday for the Thunderhawks (1-2-1, 0-1) and a non conference affair Saturday with the Moorhead Spuds.

The Little Falls Flyers topped the St. Cloud Cathederal Crusders by a score of 5-4 in overtime as Izaak Berglund scored the game winner at 5:11.  Ben Hanowski had a point on every goal as he had 2 goals to go with 3 assists in the winning effort.  After leading 3-1 heading to the third period, the Crusaders erupted for 3 as Nate Schmidt worked the last second heroics on a goal with just :24 lef on the clock stunning the homestanding Flyers. The Flyers didn't bother to hang their heads as they stepped up in the extra session for  the win. Alex Koopmeiners scored and added also had 2 assists for the Crusaders.  The victory improved the Flyers record to (3-0. 0-0) over all.  They begin conference play with Alexandria on Firday while the Crusaders (3-1, 0-0) faceoff with Rochester Lourdes. 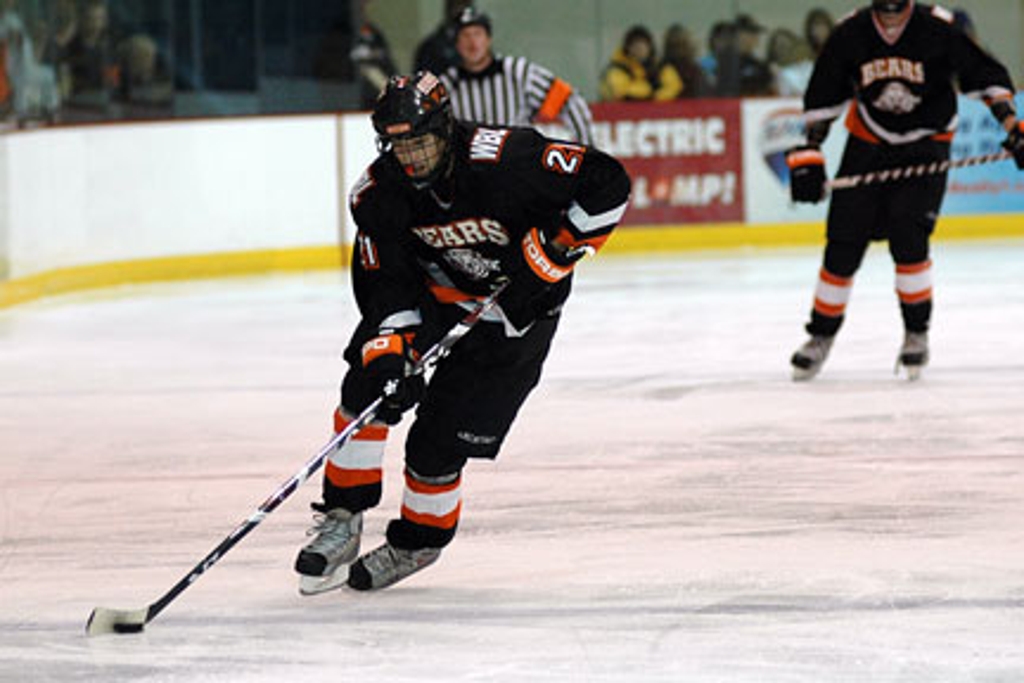