Season preview of metro-area teams south of the Minnesota River 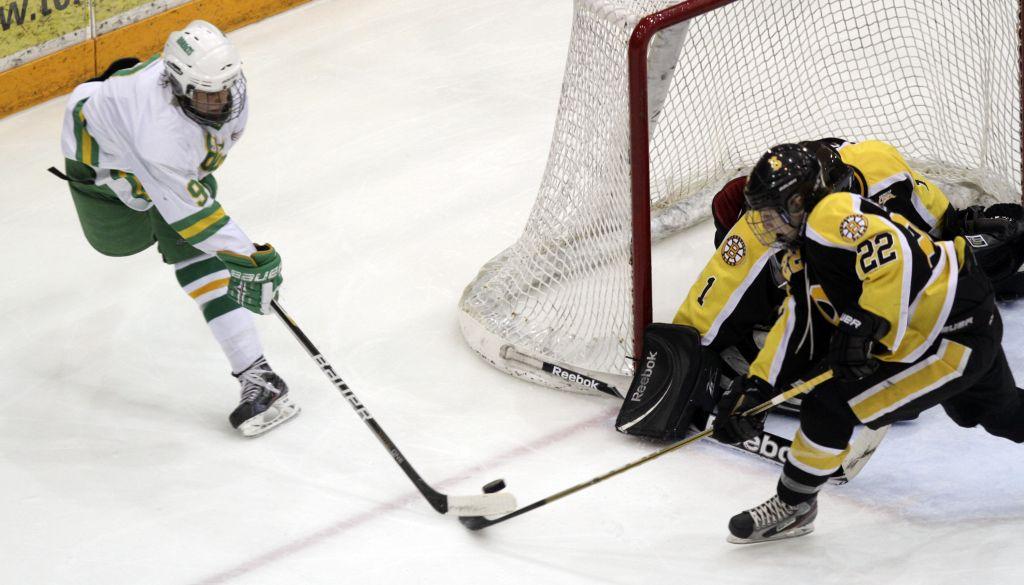 A youth movement is underway for the boys' hockey programs south of the Minnesota River, with Burnsville and Eagan still expected to come to the forefront. Here is a quick glance at the teams in the south:

Apple Valley: Coach Jerry Hayes appears to be in rebuilding mode after losing 15 seniors to graduation. The Eagles will be young, with only four seniors on the roster. One of them, Jordy Charles, will be counted on heavily in goal after seeing some action a year ago.

Burnsville: The Blaze has plenty of talent, but also will be young. Its top two players are juniors -- defenseman Teemu Kivihalme (9 goals, 22-assists, 31 points) and forward Tyler Sheehy (21-28-49). It has only six seniors, but one is veteran goaltender senior Chris Mallon.

Eagan: The Wildcats won't have the star power of a year ago, but will still be good enough to win Class 2A, Section 3. With a big void to fill on defense, coach Mike Taylor has moved senior Will Peterson back to the blue line. Seniors Zach Glienke and Cullen Willox are expected to lead the offense. Sophomore Andrew Lindgren has plenty of potential in goal. Eagan will play Hill-Murray on Saturday and Minnetonka on Tuesday.

Eastview: The Lightning hasn't had a winning season since 2007-08. The South Suburban Conference isn't nearly as strong as in recent years, which could bode well for coach Drey Bradley's squad. The past three years, Eastview has allowed more than four goals per game while scoring less than three.

Farmington: The Tigers will look to improve on a 7-17-2 season a year ago with a group of young and inexperience players. They have four freshmen vying for varsity spots.

Lakeville North: The race for the Section 1 crown goes to the Panthers over the Cougars. The two city rivals have met for the crown each of the past three seasons. It could take Lakeville North a little while to get up the speed due to five players who were on last weekend's Prep Bowl finalist football team. They have a veteran crew back on defense, but otherwise will be young. The Panthers could have as many as eight sophomores in the lineup.

Lakeville South: The Cougars were hit hard by graduation, including the departure of Mr. Hockey Justin Kloos. They finished third in the state tournament last year. Returning veterans, including six seniors and two juniors, would like nothing better than getting back to the Xcel Energy Center.

Northfield: Coach Bryce Barry, who watched his Raiders win 15 games in 2011-12, expects even better things this season. Northfield welcomes back 14 letterwinners from last year's Class 1A, Section 1 runner-up squad. Senior Andrew Scofield (28-15-43) leads the scorers back in the fold.

Prior Lake: The Lakers are another program on the rise. Coach Joe Pankratz's squad will feature nearly all juniors and seniors. They don't have a lot of firepower offensively, but they should be much improved in their defensive end from a year ago, when they allowed 3.8 goals per game.

The Lakers will find out where they stand in a hurry when they play host to Edina in their season opener Tuesday.

Rosemount: New coach Brad Stephan looks to turn around a program that has struggled in recent years. The Irish are coming off a 6-21-0 season. The team's record in the past four years combined is 18-88-0.

Shakopee: Second-year coach Lee Engstrom has a lot of lettermen returning from his initial 2011-12 team. The Sabers haven't had a winning season since 2005-06, so Engstrom has plenty of work ahead of him.

Simley: The Spartans' program appears to be headed back in the right direction. Coach Jim Joseph's squad went 15-9-1 in 2011-12 after winning 11 games in the previous season. Senior Ben Rasuchnot (20-37--57) will ignite the offense.