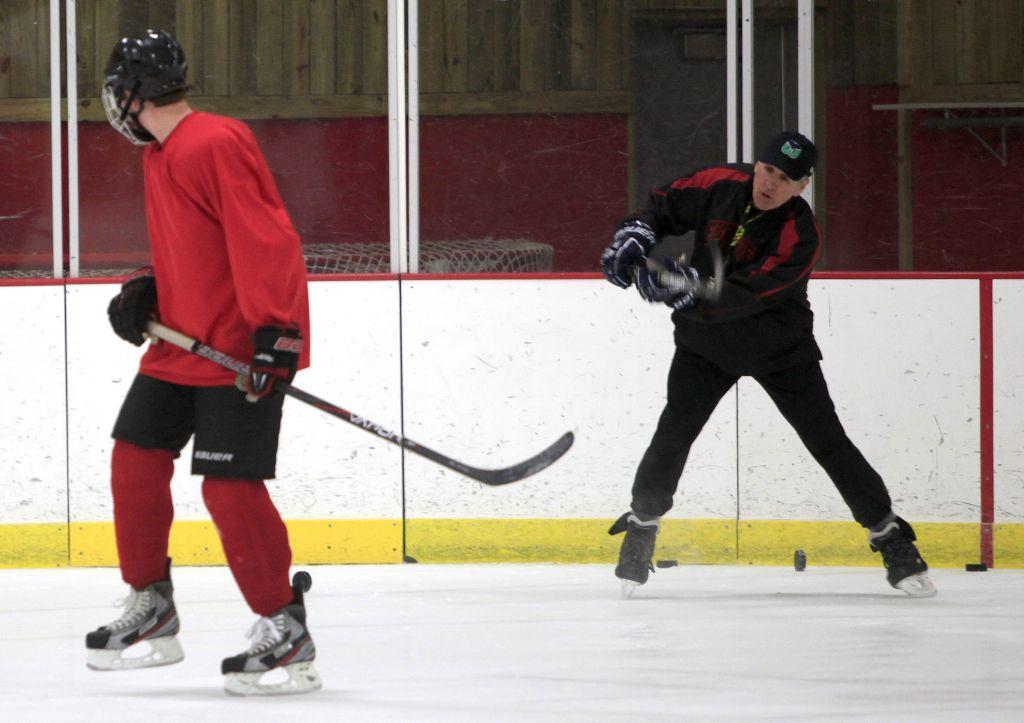 Gordie Roberts, at practice above, is the new coach of Elk River High School. Players say he likes to scrimmage with them and “he’s not afraid to throw the body.” Photo by Joel Koyama • jkoyama@startribune.com

The colorful, controversial and successful Sarsland is virtually everywhere except coaching on the ice. That job now belongs to former North Stars defenseman Gordie Roberts.

Sarsland resigned just before a school district investigation last spring and ended a 27-year run leading the Elks. Sarsland told "Let's Play Hockey" magazine that he confronted a top player "a little more aggressively" for taking two checking from behind penalties in a span of a few games.

Senior forward Tim Sanford: "There are kids that thought it was for the better because they didn't agree with how he went about his teaching, and there were other kids who felt the other way."

Sophomore forward Peter Jones: "I personally loved him. He put a lot of effort into making me a better hockey player. But there's something to be gained from a fresh perspective."

Junior forward Austin Larson: "I think everybody misses coach Sarsland but they are not necessarily mad. They could have gone either way. Most people loved him but we have Gordie now and we're going to support him."

Roberts, 54, played 21 years in the NHL, which included all or parts of eight seasons with the North Stars. He won Stanley Cups with the Pittsburgh Penguins in 1991 and 1992. Roberts has also been director of player development and an assistant coach with the Phoenix Coyotes and a scout for the Montreal Canadiens. He most recently coached on Hamline University men's hockey staff.

Roberts played for six NHL teams, learning along the way "to be respectful of what I'm coming into."

"I didn't really follow what happened with how last year ended," Roberts said. "I just looked at this as an opportunity.

"I compare Tony Sarsland to [New York Rangers coach] John Tortorella. He's a hard-nosed coach but he cares about his players. There are times you can be hard and there are times you have to put your arms around kids."

Elk River opens its season Saturday against Wayzata but players already notice the difference in practice.

"Coach Roberts teaches you how not to make a mistake vs. yelling in your face," Sanford said.

"Tony wouldn't stop practice to explain what you're doing wrong, he would take you out of a drill," Jones said. "He was an intense guy who didn't believe one player should stop a practice. But coach Roberts brings the team in for 15 seconds to make a quick coaching point. I think both styles have their advantages and disadvantages."

Players described Roberts as similar in intensity to Sarsland but less likely to yell. He gets his point across in other ways.

"He loves to get in there any chance he can," Larson said. "He'll scrimmage with us, and he's not afraid to throw the body, either. He's still got it."

Ben Gustafson, who played and coached for Sarsland before joining Roberts' staff, said of his new boss, "He's a very good communicator and his hockey background is second to none. He's got the kids' attention."

He also earned their loyalty. Emotions ran high when Sarsland left -- "He was ripped from us," Jones said -- but a new hockey season has brought healing and returned the focus to the rink. Many of the varsity players have been teammates since Squirts and want to put Elk River back in the conversation of the state's top teams.

"The team is unified, ready to go and ready to go back to state," Jones said. "We have 100 percent faith in coach Roberts. It's sad to see coach Sarsland go but we're kids and we will get through it."