Top four teams in Class 2A hail from the metro area's west side. And there's more. 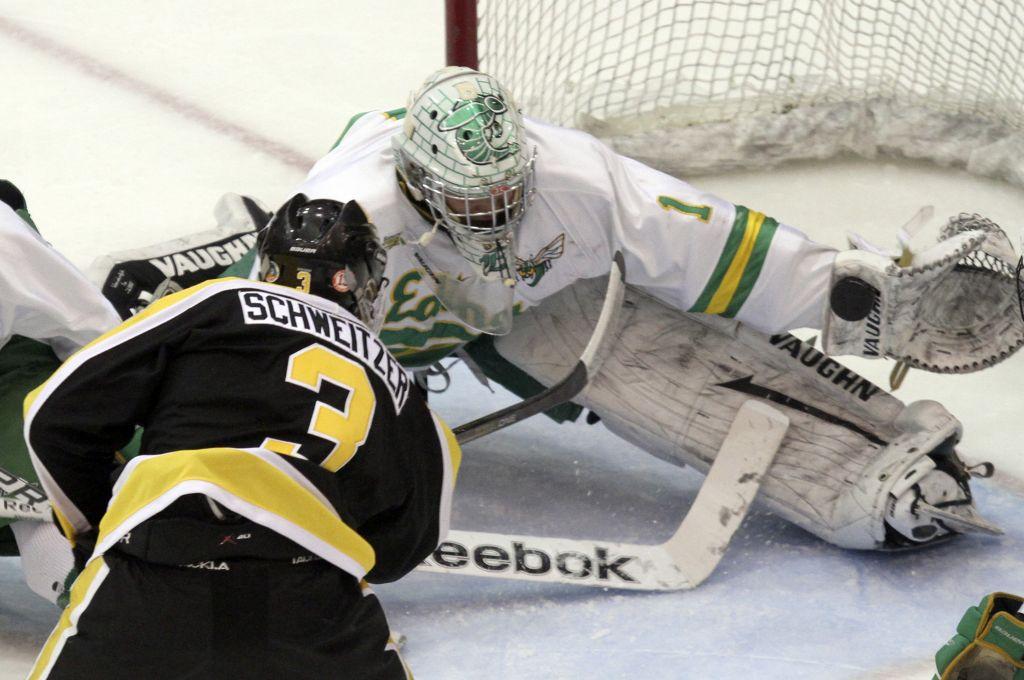 Edina goalie Willie Benjamin, shown making a save in last year’s state tournament, will return to the nets for the star-studded Class 2A Hornets. Photo by Kyndell Harkness • kharkness@startribune.com

While long a hotbed of high school hockey, it's safe to say that the west metro is the 800-pound gorilla of boys' puck for the 2012-13 season.

The top four teams in Class 2A, according to the Let's Play Hockey rankings, all reside in the west: Benilde-St. Margaret's, Edina, Eden Prairie and Minnetonka.

And that's not even accounting for others set to make some noise, such as Wayzata, Maple Grove, Holy Family and contending Class 1A teams such as Breck, Rogers, Delano/Rockford and Orono. Here's a quick nuts-and-bolts look at boys' hockey in the west metro.

• (tie) Edina: With such stars as Matt Nelson, Parker Reno, Connor Hurley and Dylan Malmquist, the Hornets are big, experienced and insanely good.

• Minnetonka: Put the Skippers in a different metro region and they're the team to beat. With a rock-solid defensive core and goalie Paul Ciaccio, Minnetonka can play with anyone.

• Breck: Senior forwards Thomas Lindstrom and Matt Colford had a combined 53 goals and 130 points between them last year. That type of firepower is tough to match.

• Rogers: With a youth system bursting with players, the Royals have the talent to reload.

• Delano/Rockford: Defenseman Grant Prinsen is a two-way rock to build upon.

(Note: Only one player per team)

• Travis Brown, Rogers, sr., D (6-17-23): Excellent size and instincts, plays the puck and the body equally well. Possesses a rocket of a shot.

GAME OF THE YEAR

• Eden Prairie vs. Edina, Dec. 22, at Braemar, 8:30 p.m. The final game of Edina's annual Holiday Classic is a pre-Christmas treat for puckheads. Go early to catch the first game, Grand Rapids vs. Elk River, at 6 p.m.

• Delano at Breck, Dec. 8. Preview of the likely Section 2A final.

GAME THAT WON'T HAPPEN (BUT SHOULD) • Edina vs. Benilde-St. Margaret's. In a sport with plenty of opportunities for juicy matchups, it's flabbergasting that these two will not meet during the regular season.