Pretty or not, Centennial goalie gets job done 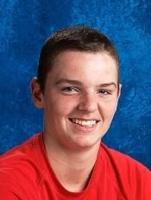 Centennial senior goaltender Patrick Munson has been busy so far this season.

His Cougars opened the season at Edina and he made 42 saves in a 4-0 loss. Two days later he dueled standout Andover goaltender Chase Perry and made 35 saves as his Cougars emerged victorious.

Munson, who played on Hill-Murray's varsity as a freshman before transferring to Centennial as a sophomore, spoke with Star Tribune reporter David La Vaque about the first two games this season, leaving Hill-Murray and why Centennial could emerge as a top team in the conference and section.

Q Talk about the excitement and nerves that your team felt starting the season at Edina and on TV.

A We had quite a few guys that never really played in a varsity game yet, and you could tell before the game they were nervous and anxious to get out there.

Q You took the loss but were there some positives that you could feel good about?

A We have a couple of sophomore defensemen who were playing in their first varsity game and I thought they played extremely well. I think as the game went on our team got better and better and that's our goal this season -- to get better and better every game.

Q Switching to the Andover game, Andover goalie Chase Perry made zero saves and gave up two goals in the second period and you made 21 saves. How does that happen?

A Andover had a lot of power plays in the period. We know Chase Perry is a tremendous goalie but at the end of the period we got two goals on two shots. Getting the win was huge against what I believe is a top-10 team.

Q Talk about your style in net.

A Well, I'm 6-2 so I have pretty good size. But I feel I'm acrobatic and can move around. My style doesn't have to be pretty, just get in front of the puck and give my team a chance to win.

Q Does your acrobatic style come from other sports you might have played?

A Growing up I was a soccer goalie and I did whatever it took to keep the ball out of the net. Once I started playing hockey it was the same thing.

Q So you are a two-sport goalie. Every goalie has something a little wrong with them in a good way. What about you?

A [Laughs.] I've always loved the pressure of being the last person to make a play, the guy that's a big factor in winning every game. You always have to be at your best and can never take a play or a shift off.

Q What went into your decision to leave Hill-Murray after your freshman year and transfer to Centennial?

A It was family reasons. It was starting to get hard financially. With my sister going to Centennial we figured it would be an easy change after my freshman year.

Q What have you seniors talked about in terms of returning Centennial to its status of five or six years ago as one of the top teams in the conference and section?

A Never take a shift off. Never leave any doubt that we are the hardest working team on the ice. We haven't always been the most grinding team that would go put hits on guys. We were more about show. I think we're becoming an all-around better team.