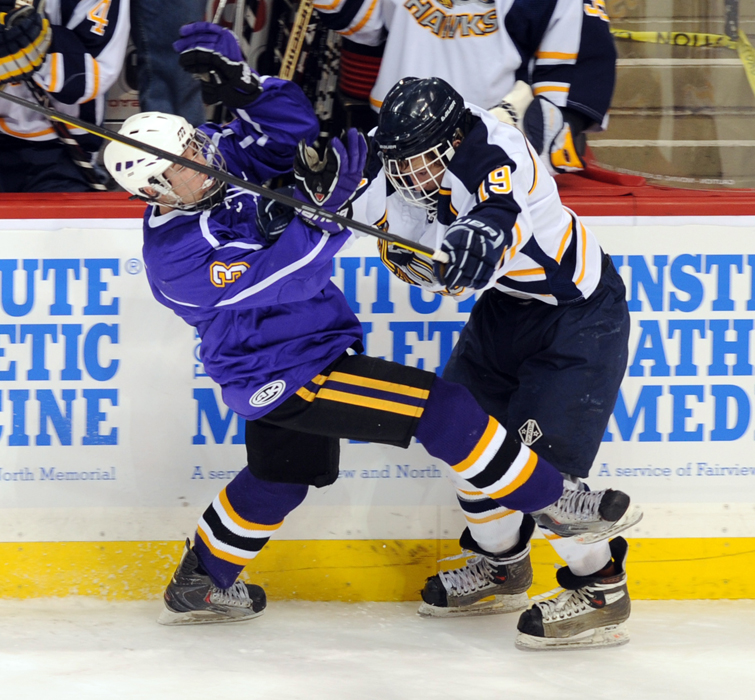 Hermantown defenseman Neal Pionk practices the way he plays. Which is to say he goes all-out, all the time.

“He’s plays hard, and he plays physical, and if a guy doesn’t have his head up, he’ll knock him on his (butt),” Hawks coach Bruce Plante said.

Plante, a former Cloquet goalie who has been coaching for  24 seasons, loves the throwback nature of Pionk’s game. Plante remember how Pionk’s off-the-charts intensity came as a shock to unsuspecting teammates.

“We had to play him on the junior varsity at first, and he would just terrorize the other sophomore players,” Plante said. “That’s how we found out who the toughest kids were, because of Neal. He’s just great.”

Plante, who has produced a parade of standout defensemen, says Pionk is the rare player who has exceptional skills in both the offensive and defensive zones. Throw in what Plante calls a “nasty” element to Pionk’s game, and it’s easy to understand why Division I recruiters were after the 5-foot-10½, 162-pound junior like bloodhounds trailing a fugitive.

Pionk, who has been likened to former hard-nosed former Hawks and Minnesota-Duluth defenseman Chad Huttel, committed to play for the UMD late last week, and the Hub caught up with Pionk on Monday for an interview that included a discussion about his committment to the Bulldogs, his practice habits and what it is like to grow up playing hockey in Hermantown.

Question: You recently committed to UMD. What sold you on playing for the Bulldogs?
Answer: You definitely have Hermantown roots there with Coach Plante and Derek. (Derek Plante, Bruce’s son, is a Bulldogs assistant). We’ve had a lot of Hermantown players there, with Jared Thomas committing there, and Adam Krause. I think it should be a lot of fun with a great rink and great facilities.

Q: What other schools did you visit?
A: I visited St. Cloud State, Bemidji State, UMD and Notre Dame.

Q: What was the recruiting process like for you?
A: It was a great experience. It took me a while to make a decision, but I really enjoyed it. It was a lot of fun to see the colleges and what they had to offer, the different rinks.

Q: Hermantown has built one of the state’s best small-school programs. What’s it like growing up and playing there?
A: Everyone knows each other. And everyone knows about the hockey team, of course. It’s just a lot of fun with the great atmosphere we have at all the games.

Q: You’ve got a bit of a nasty streak out on the ice. Where does that come from?
A: Just my love for the game and to compete for the game. My dad always taught me you have to compete at a high level to have success. My dad (Scott) was also a coach in the USHL (in Omaha and Waterloo) when I was a kid, and you see some fights at age 4 or 5. That might have something to do with it, too.

Q: What is one unusual thing about yourself that other people might not know?
A: Outside of Hermantown not many people know I was born in Omaha, Nebraska. Also, I have a baseball field in my friend yard. Not many people outside Hermantown know that. It has regulation Little League dimensions.

Q: Hermantown has developed some great defensemen over the years. Who did you look up to growing up?
A: Growing up I always looked up to the older guys. Maybe that’s where my competitive streak comes from. I always heard about Chad Huttle and the way he practiced and played so hard, and how it eventually led (Hermantown) to an undefeated season. I kind of always wanted to model myself after him.

Q: What do you think about the news that St. Thomas Academy is moving up to Class 2A?
A: Personally, for Hermantown, I think it is great news. This year, I look forward to playing them.

Credentials: Pionk scored eight goals and added nine assists in 31 games last season for the Hawks, who were unbeaten before losing to St. Thomas Academy in the state Class 1A championship game. He has four goals and two assists in four games for unbeaten Hermantown this season. Pionk was one of 16 Minnesotans invited to play in the USA Hockey Select 17 national camp in New York. Pionk's father, Scott, is a former USHL coach.

Favorite song: Something country, I can't think of the name.

Where do you like to fish? The St. Louis River.

Car I drive: Wow. This is embarrassing. It’s  a Chrysler mini van. No joke. I come from a family with five brothers (Neal is the second oldest), so my mom handed down the mini van to me. I’m often the bus driver to games.

Video game addiction: I don’t own an Xbox or PS3. So none.

Last book I read: Boys of Winter. It’s about the 1980 Olympic team.

Favorite rink other than Hermantown’s: Has to be the Xcel.

Best player you’ve been on the ice with: I would say Adam Erne of the Quebec Remparts. I played with him in a national camp out of New York.