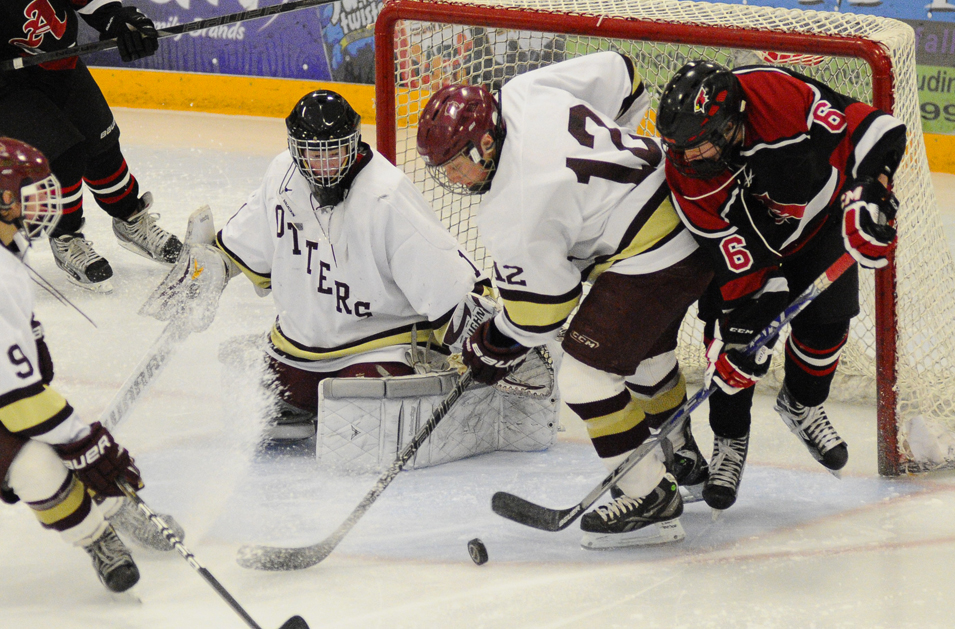 To poorly paraphrase Shakespeare: to call time out or not to call time out, that was the question. When Alexandria coach Scott Woods was faced with setting up his team’s power play in the final two minutes of a tie game against Fergus Falls Friday night, he admitted to an internal argument.

The angel on his shoulder told him to call the time out immediately and start the power play with his top unit. But the devil in his ear said they had just finished a shift and were tired. Let them rest for a minute and save it for the final seconds.

It’s the type of conflict that makes a coach look good when the eventual decision works -- and not so much when it doesn’t.

In the end, the angel’s argument won out – and so did Woods and the Cardinals. After Woods called his timeout to regroup, senior Tom Schmidt scored just 13 seconds into the power play on a one-timer to give Alexandria a 3-2 victory.

“We just felt we might not get the chance (again) and our units were kind of mixed up with guys out,” explained Woods.

“We just settled down and took care of it,” added Schmidt, who took a cross-ice pass from sophomore defenseman Parker Revering and ripped it over Otters’ goaltender Andrew MacFarlane.

Schmidt’s goal was big for two reasons. One was that the Cardinals had blown a two-goal, third-period lead and allowed Fergus Falls to the tie game. The other was that Alexandria came into Friday night’s game at less than full strength.

Two of the Cardinals’ top forwards were missing, one scheduled and one…well, not so much. Junior Toby Helgeson was on a prearranged trip but senior Jack Wensman was forced to miss the game after getting slapped with a game misconduct for boarding in the Cardinals’ previous game, a 2-1 loss at Chisago Lakes on Dec. 29.

“It certainly changes how you play a little bit, but it gives other guys a chance to step up and score some goals,” said Woods, who had to juggle his lines in their absence. He also knew he was going to get help from his senior leaders, including Schmidt.

“I kind of told myself before the game that I had to step it up and lead the team,” said Schmidt, who also scored a second-period goal with just 1.2 seconds remaining that had given the Cardinals a 2-0 lead. The senior took over the team’s scoring lead with his two-point night, giving him 14 points on the season.

“He’s one of our go-to guys,” said Woods. “We certainly expected him to have a good season.”

It’s likely the absences also led Woods to call his fateful time out with just over two minutes remaining. Or so an angel said. 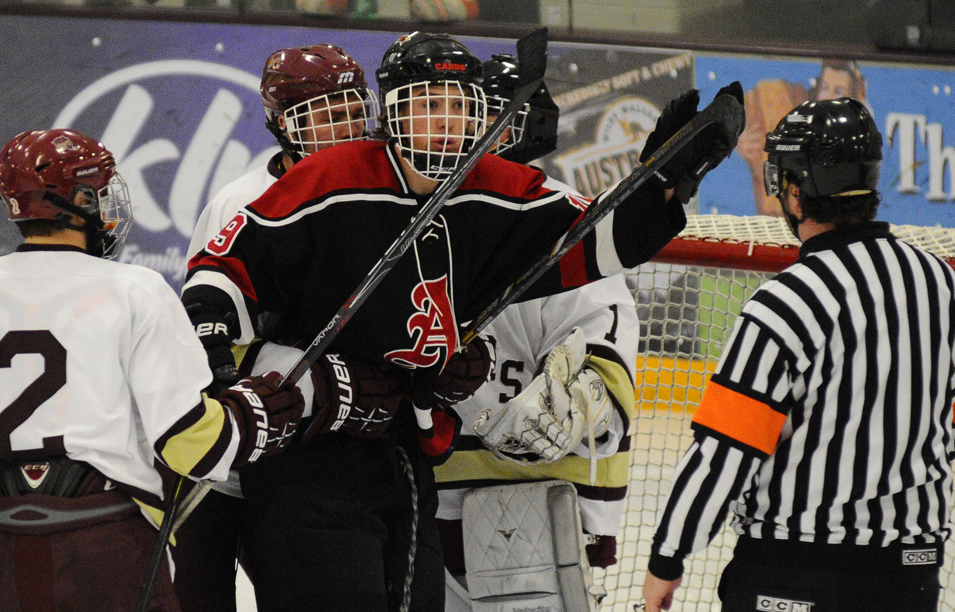 Tom Schmidt’s power play goal with 1 minute, 52 seconds remaining propelled Alexandria past Fergus Falls, 3-2 on Friday, Jan. 4 in an important game in both the Central Lakes Conference and Section 6A races. With time dwindling in the game – and after the Cardinals had frittered away a two-goal lead – Schmidt took a pass from Parker Revering and slammed it home for the game-winner.

It was Schmidt’s second goal of the game. He also scored on a power play with 1.2 seconds left in the second period that had given Alexandria a 2-0 lead. Schmidt raced up the left wall and ripped a shot high over goaltender Andrew MacFarlane, sending the puck top shelf – and the water bottle into orbit.

Fergus Falls (6-3-3) tied it with two goals in the third period from Casey Ward and Joe Nathe.

Alexandria (6-5-1) had lost its previous two games by a single goal each, but reversed the trend against the Otters.

Fergus Falls entered on an eight-game unbeaten streak (6-0-2), not losing since a 5-1 setback against Little Falls on Dec. 7. But the Otters had no solution to a stout Cardinals defense through the first two periods. Alexandria allowed the Otters little room to operate in the offensive zone and kept most shots on goaltender Ben Allen from well outside scoring territory. Allen, a three-year starter who was part of the Cardinals’ last state tournament team in 2011, made 18 saves for the victory.

MacFarlane had 31 saves for Fergus Falls.

1. Tom Schmidt, Alexandria
With the Cardinals missing a few key veterans, the senior forward took charge by scoring the final two Alexandria goals, including the game winner with just under two minutes remaining. His prettiest goal was his first, though, with a rocket under the crossbar with 1.2 seconds left in the second period.

2. Parker Revering, Alexandria
A sophomore defenseman, Revering was the point man on Tom Schmidt’s game-winner late in the third period. He found Schmidt alone on the far wing, feeding a perfect pass that Schmidt hammered into the open net. Revering also picked up an assist on the Matt Resch’s goal in the second period.

3. Casey Ward, Fergus Falls
Ward, a senior captain, generated offensive chances in the third period after the Otters had been shut down for much of the first 34 minutes. His goal less than three minutes into the third got the Otters on the board and spurred their comeback. 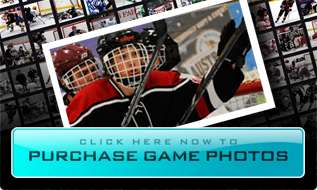