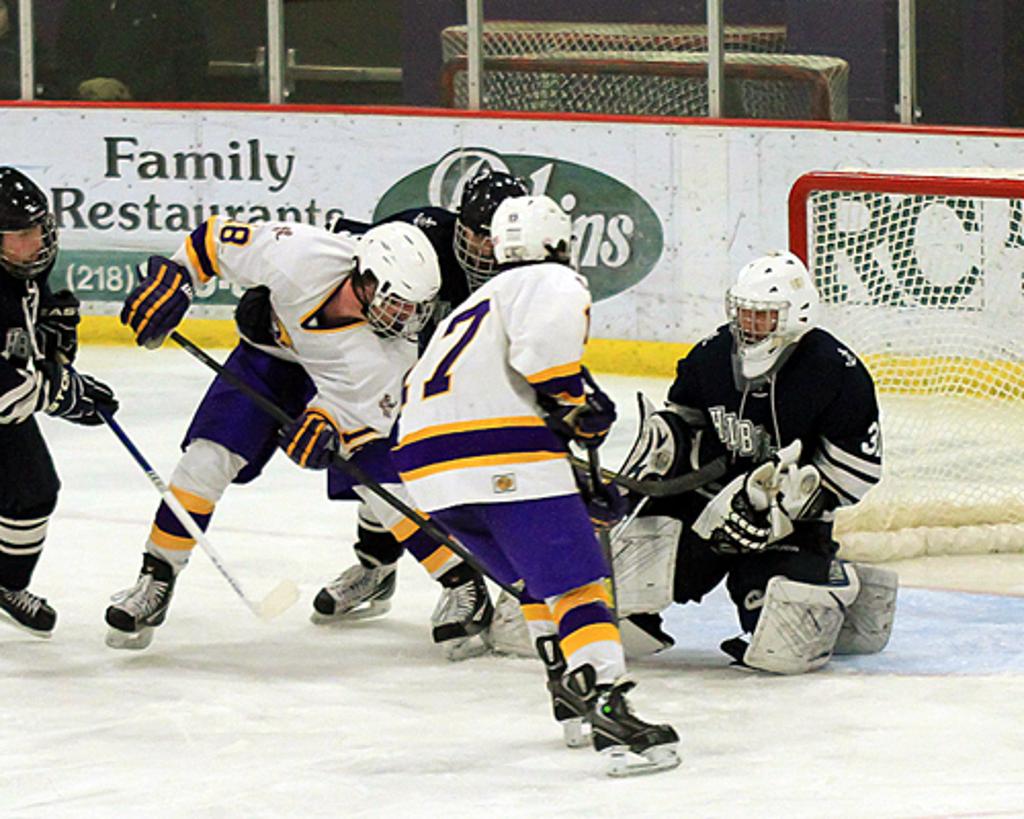 Cloquet's Westin Michaud (17) circles around the net a teammate battles with a Hibbing defender. Photos by Dave Harwig, ViewThroughMyLens.net

The Jacks have simply overpowered their foes with a dynamic offensive attack, one that comes in many different ways and off many different sticks. They’re averaging 5.73 goals per game, an average that jumped up following a 7-3 rout of visiting Hibbing/Chisholm on Tuesday, Jan. 8.

Cloquet has three forwards with at least 30 points, and two defenseman with over 10. The Jacks have scored five or more goals in nine different games this year.

“We’ve really pulled it together,” said defenseman Drew Dincau, who likes to get involved in the offense and proved it with three more points on Tuesday. “The offense is really rolling.”

After starting the year with a talented trio of Westin Michaud, Beau Michaud and Karson Kuhlman skating on the same line, coach Dave Esse has tinkered with the forward groupings in practice and in games, giving Cloquet good scoring depth.

And, unlike some instances where players struggle to find a niche on their new lines, the Jacks have instantly gelled, no matter the combination.

“Coach has changed up the lines this year and we finally found some team chemistry,” Westin Michaud said. “Hopefully we can keep this going.”

Michaud was the hero on Tuesday, scoring five times in all different kinds of scenarios and spots on the ice.

His first two goals came on hard-nosed plays around the net, where Cloquet worked the puck to the crease and batted it around until it crossed the goal line. His third goal was a deflection after a cross-ice, backdoor pass. His final two goals came on beautiful plays that displayed the creativity of the Jacks.

Even though it’s not Michaud notching five goals each night, those types of goals and the variety in which they come have turned into a regular thing for Cloquet.

Much like the forwards, the Cloquet defensemen have been instrumental in the offensive attack, often starting plays with solid breakouts, crisp regroups or smart quarterbacking from the point.

“The defensemen are huge for us,” Michaud said. “They can jump up in the play and put the puck in the net and that’s what you need against some of the teams we play.

They are contributing a lot this year, they are playing with a lot of poise and that’s a big part of why we’re succeeding this year.”

Dincau agrees, and he should, since he’s been the catalyst from the backend this winter.

“It’s a team sport, so one guy can’t do it alone,” he said. “Teamwork is key, and we need to work the puck around to everyone and everyone needs to contribute.” 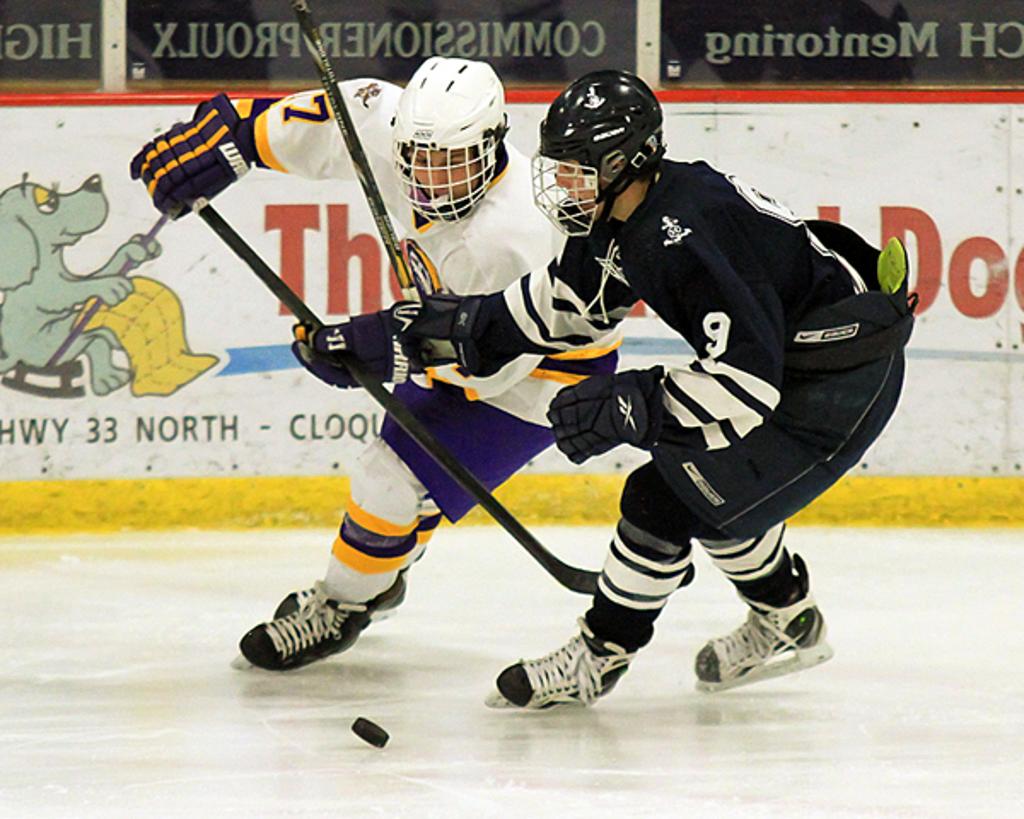 For the first 16 minutes, 19 seconds of the contest, it was looking like Bluejacket forward and Minnesota Duluth recruit Adam Johnson would be the story. In that span, Johnson notched a pair of goals and allowed Hibbing to build a 2-1 lead in the waning second of the first period.

But that’s when the game turned into the Westin Michaud show.

Michaud scored late in the first to tie the score, two more times in the second to give the Lumberjacks a 4-2 lead entering the third and then iced it with another two-goal period in the final period.

James Newgren also scored for Cloquet (10-4-1), while Zack Strom made 19 saves in goal.

Johnson added an assist for Hibbing (7-7-1), which came on a pretty pass to teammate Josh Bestul on a third-period two-on-one.

AJ Allison and Ishiah Dilley split time in net for the Bluejackets due to the absence of regular starter Tyler Carlson. Allison turned away 28 of 32 shots through the first two periods before Dilley entered the game in the third and made seven saves on 10 shots.

Cloquet is off until Friday, Jan. 11, when it hosts Eden Prairie.

1. Westin Michaud, Cloquet/Esko/Carlton
Michaud showed that he can score in just about every way imaginable on Tuesday night – redirections, rebounds, snipes, breakaways… you name it. He finished with five on the night and had Cloquet fans scrambling for extra hats when he touched the puck late in the contest.

2. Adam Johnson, Hibbing/Chisholm
If not for Michaud’s blitzkrieg on the score sheet, Johnson probably would have been the game’s first star, even though his Bluejackets came up on the losing end. Johnson created tons of offense, especially in the first period, giving Hibbing a spark that it needed early in the contest. Oh, and he did it all while switching between forward and defense.

3. Drew Dincau, Cloquet/Esko/Carlton
Cloquet hasn’t had much trouble scoring this year, and, while they have some ridiculous talent up front, Dincau has been equally as important in the offensive attack from the blue line. He’s composed with the puck, he’s not afraid to shoot and he’s able to find teammates all over the rink, often setting them up for golden scoring chances. 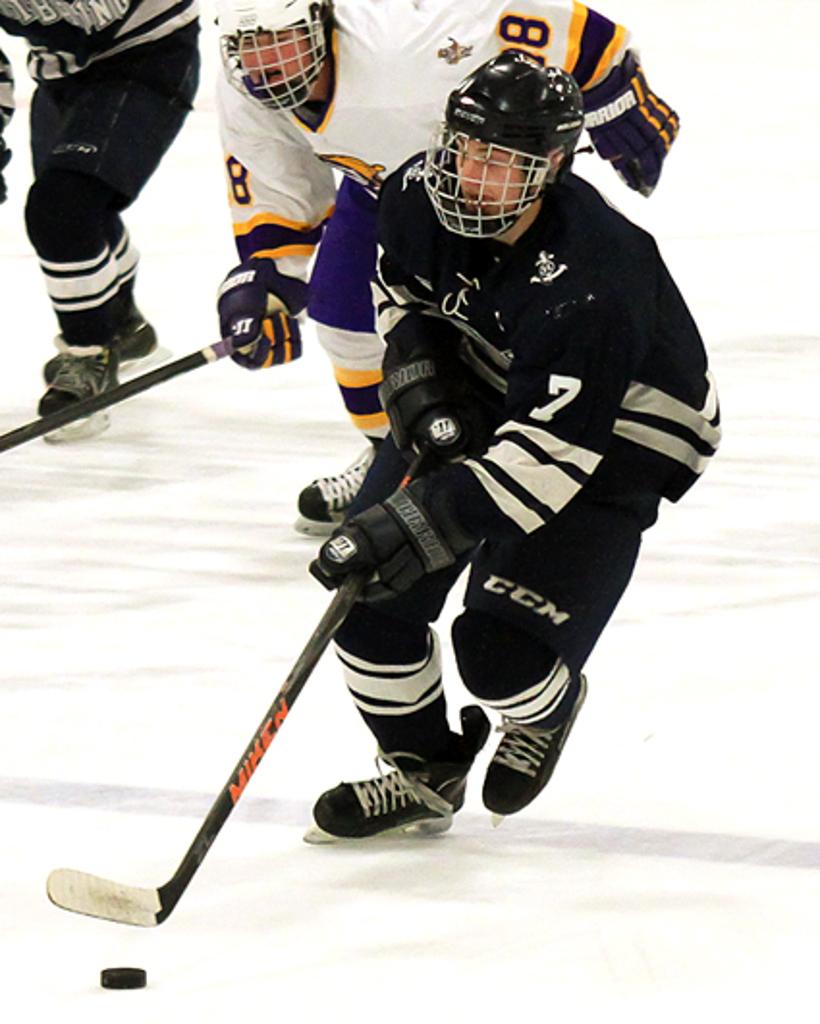 Hibbing's Adam Johnson works the puck up the rink on Tuesday night in Cloquet. Photos by Dave Harwig, ViewThroughMyLens.net