Harsher penalties on risky checks have made the game safer, but some lament a 'softer' game 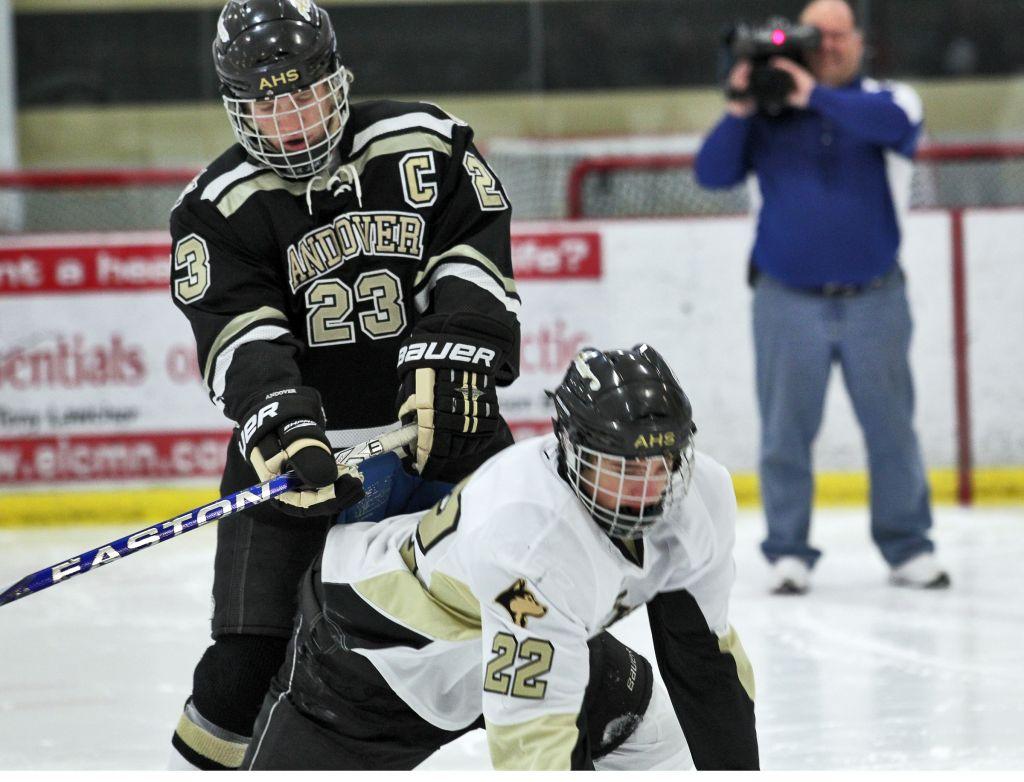 Officials conducted a video session with Andover hockey players to demonstrate a change in rules.

Culture change, like it or not, has started in Minnesota high school hockey as the first full season with tougher penalties to make the game safer swings into high gear.

Evidence can be found along the boards, which have become a place of respect rather than reckless hits. It also shows up in the heads of players not wanting to put their team at a big disadvantage during a game.

Tougher penalties put in place last January helped deter the players not already affected by the check from behind into the boards that paralyzed Benilde-St. Margaret's forward Jack Jablonski. Checking from behind and boarding were changed to carry an automatic 5-minute major penalty.

"I can clearly see a player who wants to hit along the boards has changed his mentality and is more under control," said C.J. Beaurline, a veteran college and high school official and member of the 2012 National Federation of High School Association hockey rules committee. "The culture is changing. It's headed in a positive direction, but by no means are we satisfied."

"I hope ultimately the end goal is a reduction in the penalties in those areas because we've seen less of that dangerous kind of play," said Perry, whose organization pushed for the penalty changes and declared culture change a major goal.

No player, coach or referee objects to safety. But members of all three groups expressed concerns in recent interviews with aspects of the tougher penalties and resulting unintended consequences.

For example, confusion with the rules resulted in automatic player ejections earlier this season that might not have been warranted.

Some caution that changing culture could alter the game's essential elements.

"We don't want to take away the aggression that goes with the sport," Benilde-St. Margaret's coach Ken Pauly said.

Hill-Murray coach Bill Lechner said, "I don't love playing schools that maybe can't skate and just send bodies flying at you trying to take you off your game. If the changes help that, that's OK. But I don't mind playing physical when it's legal. Even talking to my assistant, Pat Schafhauser, he hopes it doesn't get too soft of a game."

Schafhauser crashed into the boards while playing professionally in 1995 in Switzerland and was paralyzed from the waist down.

"We cannot legislate keeping kids safe," Blaine coach Dave Aus said. "What happened to Jack Jablonski makes you sick to your stomach. But with that said, you cannot protect every kid in every situation. Accidents happen."

Changes to the high school game were adopted by youth hockey in Minnesota as well, but initially drew more curiosity than consensus in hockey-playing states such as Massachusetts, Michigan and Wisconsin.

But all three states are following tougher language on checks from behind into the boards or goal frame that was adopted by the National Federation of State High School Associations after the Minnesota changes. Those hits now automatically draw a 5-minute major penalty and player ejection -- but Minnesota does not follow those rules because it was previously granted experimental status for the tougher penalties.

The NFHS change created confusion among local hockey officials. Some thought checking from behind carried an automatic ejection. Perry said there were "about 10 cases" of ejections that might or might not have been warranted but added "it's impossible to go back" and review any unwarranted ejections.

Minnesota high school athletes ejected from a game are also disqualified for the next game. A second ejection costs a player four additional games. Perry said "very few" athletes get ejected for a second time.

Bill Kronschnabel, the high school league's coordinator of hockey officials, said he "hears from a lot of officials and coaches that they wish we had the authority to DQ a player for just that game. I know it would be easier for officials that way."

The threat of missing about 20 percent of a season, Aus worried, will result in "more guys jumping ship" to other hockey leagues with less severe consequences for dangerous hits.

Chris McAlpine and Ben Hankinson, family advisors who work with local hockey players through Octagon Hockey, said players who thrive on being physical now have one more reason to consider leaving.

"You could see some Canadian leagues preying on Minnesota players and saying this isn't the best way to get to the next level," Hankinson said. "As a whole, what Minnesota is doing is better for safety but it adds to the stigma that Minnesota kids are a little softer."

Former Breck standout Keegan Iverson, a 6-2, 215-pound sophomore forward, left the local high school ranks after last season for Portland of the Western Hockey League. He told Yahoo! Sports blog Buzzing the Net that while Jablonski is one of his best friends, "I want to throw my body around, and some changes in the rules in high school hockey prevented me from doing that."

Players who remained at local high schools are experiencing a safer, if more subdued game, a continuation of last season's play after Jablonski's injury on Dec. 30, 2011.

"Ever since what happened to Jack, everyone has been less reckless on the ice, which is good," Breck senior forward Matt Colford said. "It's good for high school to get the dirty hits out of the game."

Cleaning up the game has its costs, Hill-Murray senior Zach LaValle said.

"It's tough because the [referees are] calling everything," LaValle said. "That's understandable with what happened but it kind of changed the game."

Referees were given discretion this season to not call 5-minute major penalties for indirect contact to the head. Benilde-St. Margaret's forward Grant Besse would like to see increased discretion in other areas.

"I still agree with five minutes for checking from behind but I think some boarding calls aren't worthy of a five-minute major," Besse said.

"I'm definitely more cautious if the guy's got his back turned," Kerr said. "I'm not going to go nearly as hard as I might have used to."

After his team's 4-2 loss to Hill-Murray on Dec. 8, Pauly called it the "least physical Benilde-Hill-Murray game I've been a part of.

"I didn't like the outcome but it was a pretty dang entertaining game from a fans' perspective. I think people who watch high school hockey will take that style of game over a bunch of guys trying to trap and bang each other."

Benilde-St. Margaret's forward Jack Jablonski is paralyzed by a check from behind into the boards in a junior varsity game.

Minnesota State High School League makes unprecedented midseason change -- stiffer penalties on dangerous hits in boys' and girls' hockey. Checking from behind, boarding and contact to the head penalties all result in 5-minute major penalties. The opposing team can score as many power-play goals as possible in that span.

Minnesota Hockey, which oversees 40,000 youth players, votes 18-6 to maintain stiffer penalties for dangerous hits. The group's safety committee had recommended going back to its previous structure, igniting a passionate debate.