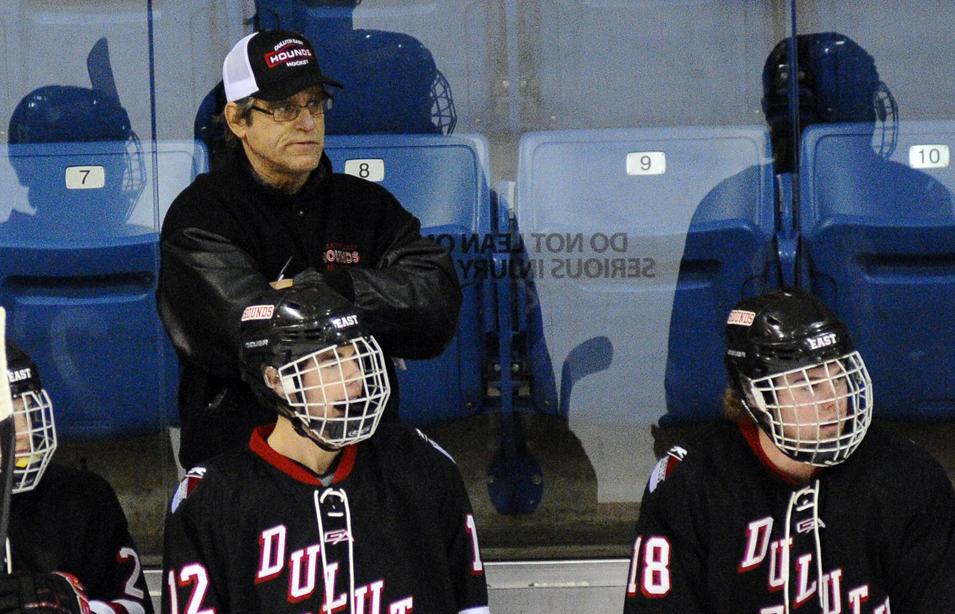 It was the day after, and Mike Randolph’s phone was stuffed to the brim.

Congratulatory voice messages, texts and emails had streamed in throughout the night and into the wee hours of the morning.

“I am going to the (YMCA) to work out, and my phone was full,” said Randolph, the Duluth East coach who earned his 500th career victory on Thursday, Dec. 13, in a 5-2 triumph over Cloquet at the Duluth Heritage Sports Center. “It was really cool.”

He joined icons such as Willard Ikola, the former Edina coach who finished his remarkable career with 616 victories and eight state championships, and Larry Ross, the deceased International Falls legend who won 566 games and six state titles while turning the Broncos into a state superpower in the 1960s and ’70s.

“I never realized I was approaching 500 until a few weeks ago,” Randolph said a few days after reaching the milestone. “And now here I am amongst that group. I am just honored to be mentioned among those guys.”

Randolph’s feat comes at a time when coaching longevity is becoming increasingly rare. Of the state’s 154 boys’ hockey programs, 24 have new coaches this season. Entering last season, 29 programs had new coaches at the helm. That’s a turnover rate of about one-third of the state’s coaches every two seasons.

“There’s not many guys like us around any more,” Randolph said. “I go to a coaches’ clinic and look around the room, and there aren’t many faces I recognize.” 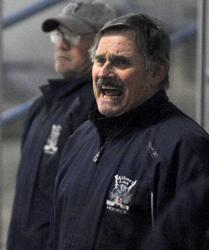 Albert Lea’s Roy Nystrom has been coaching for 47 seasons, the last 40 at Albert Lea. When he looks around the Big 9 Conference he sees fellow longtime coach and good buddy Lorne Grosso at Rochester Mayo and newcomers most everywhere else.

“I think it is getting pretty rare,” he said about the sort of staying power required to rack up 500 wins.

“In the Big 9, the conference we are in, Lorne and I are the oldest coaches by far. Owatonna, Austin, Faribault . . . it seems like everybody has had a new coach in the last three or four years.”

Big-name departures have been plentiful

Elk River’s Tony Sarsland, Buffalo’s Mike MacMillan, Centennial’s Erik Aus, Virginia’s Keith Hendrickson and Wayzata’s Carl Davis are among the coaches with at least 15 years behind the bench who have retired in the last few years.

All those departures make milestones such as Randolph’s 500 wins seem virtually unreachable for the state’s new wave of coaches.

“During the season, whether you are new coach or somebody who has been coaching for a long time, it really takes it out of you,” said Little Falls coach Tony Couture, who is in his 20th season guiding the Flyers and reached the 300-win plateau earlier this season. “You better sleep and you better eat well. The energy level that you have to have at practice and dealing with the everyday of the season is enormous.

“You don’t see too many coaches getting into their 20 and 30 years anymore. I’m at 20 and I don’t know if that is stupidity or what. It is unbelievable to fathom 500 wins, that’s not even counting the total games (Randolph) has coached.” 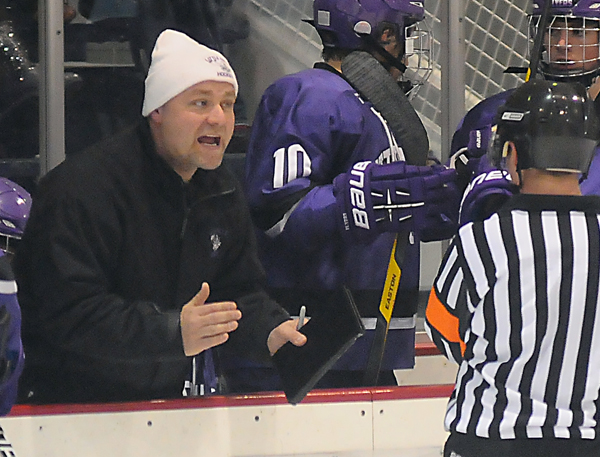 Tony Couture of Little Falls recently won his 300th career game in 20 years with the Flyers.

Nystrom and Grosso have avoided the state’s coaching churn for more than four decades.

“We are the exceptions,” Nystrom said. “We go way back.”

Each have more than 600 wins in careers that have spanned Nystrom’s 47 seasons, including seven in North Dakota, and 45 for Grosso.

Former linemates at the University of Minnesota, Nystrom and Grosso have remained close friends over the years. Both insist they have several years of coaching left in the tank – as long as their health allows it.

“We have no intentions of retiring,” Nystrom said.

Nystrom went to Florida for stem cell treatment before the season and, depending on how his hip responds, might be facing surgery for a replacement. For the first time in his career he hasn’t been on the ice for practices, directing them from the bench instead.

Grosso, meanwhile, is back on the ice with the Spartans and, he says, feeling as good as ever.

Nystrom has maintained for years he would like to coach his two grandsons, the youngest of which is 8, at the varsity level. Nystrom’s son, David, serves as a Tigers assistant coach.

“I’d like to stick around that long, I really would,” Nystrom said. “I have been very fortunate down here. I don’t have any parental difficulties.

“When you come from an area where we are at Southern Minnesota, it’s a tough job. But it is also very satisfying if you can bring up the level of these players and the program.”

Organized parents groups have pushed several coaches out the door, including the well-publicized departure of Roseville’s Jeff Pauletti last spring.

"There is an epidemic across the country where quality coaches and good people are being pushed out of the profession," Carl J. Pierson, the Waconia girls' basketball coach and author of a book called "The Politics of Coaching," said in the Star Tribune article. "They're overwhelmed by the politics of the position. A lot of them try to ignore it and do so at their own peril."

Grosso, like Nystrom, said he’s been mostly insulated from such problems.

“Some coaches just get tired of the parents and stuff like that,” Grosso said. “I just say, ‘The kids are our responsibility now, and if they have a problem (the parents) can come to us. As long as you don’t talk about ice time.”

Randolph hasn’t been immune from criticism. Controversy raged, headlines screamed and hockey-crazed Duluth was in turmoil when he was fired in 2003 then reinstated a season later in a heavily scrutinzed 5-2 Duluth School Board vote. 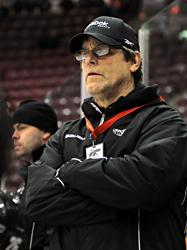 Randolph always aims for the top

Expectations have always been in the stratosphere for Randolph, who resurrected a Duluth East program that reached the state tournament just once in the previous 27 seasons before he took over in 1988-89.

No one set higher standards for the Greyhounds than Randolph, who made a confident guarantee the day he was hired.

“I told them, ‘One thing I will say, and I don’t know if it is important to you, but we will get to a state tournament in five years. If we don’t, you can fire me, ’ ” Randolph said.

By the end of Randolph’s third season the Greyhounds had finished second at the state tournament. He won the first of his two state titles in 1995. Duluth East has won the Section 7AA championship in 12 of Randolph’s last 18 seasons at the helm.

“He is into hockey so much,” said Grosso, who has developed a close friendship with Randolph over the years. “I like to listen to him when he talks about practices.

“Offensively, when you watch his teams, he doesn’t hold back. He’s ingenious. He loves the strategy and the tactics.”

Randolph was a high school star at Duluth Cathedral (now Duluth Marshall), where he played for legendary coach Del Genereau. Randolph won three state Catholic hockey titles and, as a senior, lost in overtime to Hill (now Hill-Murray) in the championship game of the newly created state Independent tournament.

Randolph played junior hockey after high school and was one of the last players cut by U.S. coach Bob Johnson just days before the 1976 Winter Games in Innsbruck, Austria.

“I took kind of a different path of a lot of guys,” Randolph said. “I’ve played for a lot of different coaches. I envisioned myself getting a coaching job and a teaching job.

“Throughout my career I would steal things from different coaches that I really thought worked or would work. You’ve really have to keep up with what is going on with the game. 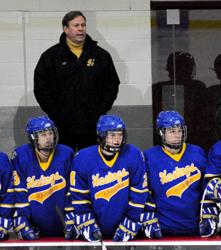 Best of the best

Only seven state coaches have won 500 careergames, and in that group only legendary former Eveleth coach Cliff Thompson and the iconic houndstooth hat-wearing Ikola can boast higher winning percentages than Randolph.

“His teams play the way we used to play,” Ikola said. “They move the puck, they are always a good skating team with good puck movement. They play hard but they play clean. Just a fun team to play.”

Randolph honored his rink rat heritage – he spent his childhood playing pickup games at Duluth’s Chester Park – and displayed his flexibility as a coach in the early to mid-1990s when his Greyhounds teams became the darlings of the state with their run-and-gun style. Featuring one of the great goal-scoring combos in state history in Dave Spehar and Chris Locker and a slick-passing defensive corps, Randolph gave Spehar the freedom to circle the neutral zone awaiting breakaway passes.

“As you get older you realize how great a time it was,” said Spehar, who famously scored three consecutive hat tricks while leading the Greyhounds to the 1995 state Class 2A title and sent one of those congratulatory messages to Randolph. “He let us stretch the rink out. How much fun was it to play hockey? It was like we were at an outdoor park.

“If a defenseman didn’t want to honor one of us leaving the zone, where we not supposed to take advantage of that?” 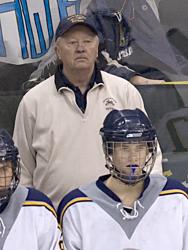 The next major milestone coaching victory most likely will belong to Mark Loahr of Totino-Grace, who entered the season with 470 wins in his 32 seasons guiding the Eagles. Hastings coach Russ Welch, who spent 10 seasons coach at South St. Paul, had 430 wins entering the season; Hermantown’s Bruce Plante had 428.

Randolph’s next big milestone is 600 wins, and he just might get there. He says his passion for coaching hasn’t waned. He has, however, expressed a desire to someday move closer to his youngest son Jake, the former Duluth East star who is playing for the Omaha Lancers in the USHL. Jake has committed to play at the University of Nebraska-Omaha.

Randolph also was behind the bench in one of the longest, and many say the greatest, game in state history. Spehar-led Duluth East lost a five-overtime state semifinal to Apple Valley in 1996 -- a game that remains the longest in state tournament history -- and included a controversial call in overtime in which an apparent Duluth East goal was waived off. Apple Valley won 5-4 en route to the state title.

“As far as the future, it is kind of year to year now,” Randolph said. “As far as coaching I would love to continue to coach. I don’t fish, I don’t hunt, and I don’t golf and I don’t do a lot of things, but I’m in a rink year round.

“To be very honest, I want to get closer to where Jake is playing so I can see him play.” 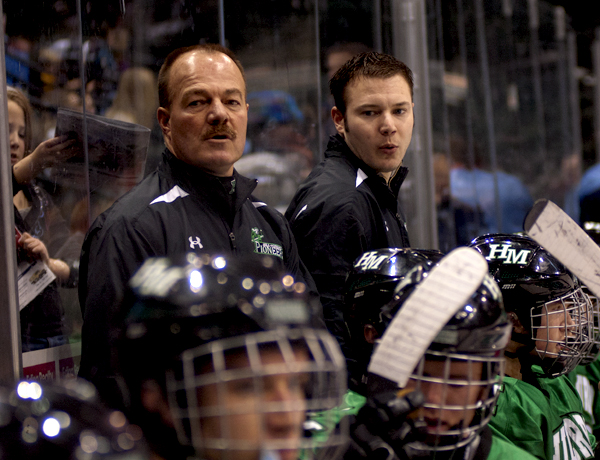 Bill Lechner of Hill-Murray is one of the few current coaches who could approach the 500-victory plateau in the next few years.

*Welch coached 10 seasons at South St. Paul before taking over at Hastings.